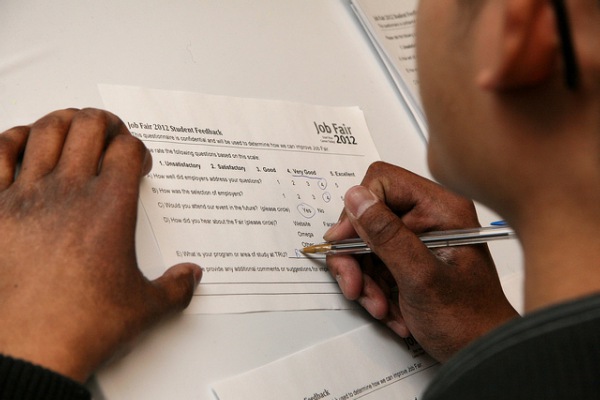 Okay, stop us if you’ve heard this one: A guy walks into a New York City employment assistance office. He’s just been laid off, and he’s terrified. At the assistance center, he receives a cursory assessment of his interests, skills and barriers. No one there has a record of whether this is the first time he’s used the workforce system, or whether he has already received multiple services — the city has no system-wide data bank.

He’s given a voucher to attend a training class in an occupation he’s interested in and heads off to one of those proprietary schools he’s seen advertised on the subway. But after completing the training, it turns out that few employers are hiring right now for that type of job — the city workforce system doesn’t always use up-to-date labor-market information.

He’s then sent off to several interviews with employers where his skills are not a good match — his job counselor doesn’t have a close relationship with local employers and doesn’t know what they’re really looking for.

Soon he’s discouraged and decides that the workforce system is not worth his time and local employers are frustrated because they’re not seeing any candidates with the right skills — the system is not fully meeting the needs of either job seekers or businesses.

This story will be repeated all too often unless the next Mayor of New York City redesigns the entire workforce system. Though the Bloomberg Administration significantly improved the workforce system the past several years — despite decreasing federal and state financial support — the current system has likely improved as much as it can within the limits of its siloed and fragmented framework.

With New York City’s unemployment rate hovering at 9 percent, the next mayor will make job creation for all New Yorkers a top priority. And yet our next mayor will face an even greater challenge: Public funding for workforce development is in steady decline—the city’s Workforce Investment Act (WIA) dollars were more than cut in half over the past decade, with many in Congress urging still further cuts—while the city’s job growth will likely continue to lag behind its population growth.

A Workforce System That Works

The good news is that our next mayor will have the power to redesign New York City’s workforce system into an innovative engine for job creation that serves both employers and jobseekers: The Strategy Group just published “Re-envisioning the New York City Workforce System,” which proposes an entirely new framework for how the workforce system could serve both businesses and jobseekers across the five boroughs.

The re-envisioning document frames five key recommendations for all the mayoral candidates to consider:

Re-envisioning the New York City Workforce System is a blueprint that the next Mayor can use to deliver on the promise of job creation across all five boroughs of New York City.

David LaGreca is executive director of VCG Governance Matters and co-chaired the New York City Workforce Strategy Group, along with Steven Dawson, strategic advisor to PHI. The Workforce Strategy Group included a diverse range of workforce stakeholders with decades of experience in the city’s workforce system. As a volunteer group, its charge was not to articulate the vision for the future, but rather a vision, one intended to engender spirited debate within the workforce, employer, philanthropic and public policy communities. Copies of Re-envisioning the New York City Workforce System are available at: http://www.reenvisionworknyc.org/.