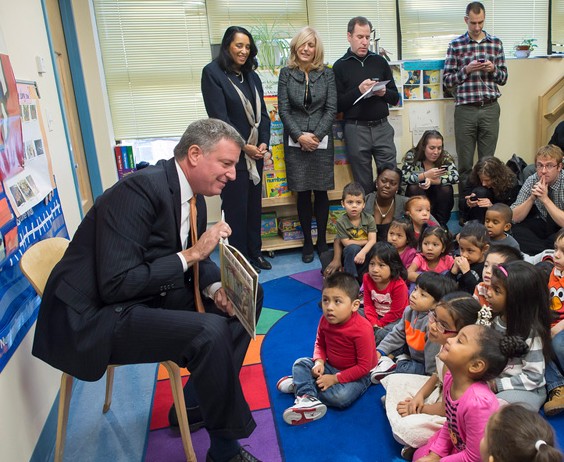 An analysis of the new State charter school siting law demonstrates that the City has the ability to decide, as a regular practice, to purchase or rent charter facilities instead of engaging in endless co-location battles. This would enable the Mayor to keep his campaign promise to tamp down co-locations while appeasing charter advocates who backed the new law.

Despite a widespread assumption that the City can only offer off-site space if co-location is impossible, the recently enacted State statute on co-locations requires the charter school to request co-location but gives the City an equal option of responding either with a proposed co-located site or a non-Department of Education private or public building.

The law even opens to question whether such a decision by the City is appealable (the appeals provision only refers to "co-location"), but assuming a charter's right to appeal an off-site decision, the standard of appellate review favors the City, as clearly stated in recent court decisions holding as reasonable Mayor Bloomberg's charter co-location decisions. Those cases were misunderstood as charter victories, but their real importance is that they upheld the city's discretionary authority to determine charter sites. Under the law, reversing such a decision requires a finding that the city's proposal was "arbitrary and capricious," a very high standard for charters to meet. The new statute explicitly incorporates that standard.

As a result, the City could successfully defend a good faith off-site offer without charter acquiescence. But why wouldn't a charter prefer independent space, especially given all of the tension over space sharing and district school displacement? I'm foreseeing deals in which the charters will agree; move into their own sites, free and clear without co-location hassles and with School Construction Authority renovations thrown in!

Where co-location arrangements make sense in schools without future over-crowding or other instructional detriments, such decisions would be financially preferable. But the governor and Legislature created the payment obligation, so any mayoral decision to cover charter rental costs instead of co-locating should be laid at the State's door, not the City's. And the City's sole share is limited to a $40 million ceiling, after which a State contribution is triggered with federal charter school aid also likely to be available.
.

While the $40+ million in possible rental payments are attributable to the City's annual expense budget, purchase or renovations are capital items. Remember the new administration's cut of $210 million in the capital budget that Bloomberg had earmarked for off-site charters, arguably the action that set off this real estate scramble? That previously committed money is still available and, if the editorial pages didn't object to Bloomberg's handing it over to charters, they can hardly object to de Blasio's pressured re-allocation.

A further reason for highlighting the mayor's discretionary siting power, one of the few he actually has over charters since their operations are intentionally out of the hands of the mayor and chancellor, is the likelihood that school space will soon become scarcer. Will we suddenly demolish a bunch of buildings? No. But the mayor has a commission, working behind the scenes, which will soon recommend changes in the usage formula used for calculating school overcrowding, known as the Blue Book. The old formula, which Bloomberg used to justify spaces for charter co-locations, is likely to be recalibrated to require more space per child plus the need for libraries and art spaces, significantly lowering the threshold at which a school is designated fully enrolled. Add to that a promised decrease in class size and the need for pre-k space. Poof!, an immediate and significant decrease in available space for co-located charter or traditional public schools.

As politicians, budget experts, and lawyers toil over the intricacies of school siting under the State's new rules, it is to be hoped that educators, parents, and students are allowed a voice in these determinations. If so, a new spirit of cooperation, if not co-location, may result.

***
David C. Bloomfield is Professor of Leadership, Law, and Policy at Brooklyn College and the CUNY Graduate Center; contact: This email address is being protected from spambots. You need JavaScript enabled to view it.
***
The statute in pertinent part, at NYS Education Law § 2853(3)(E)(1), requires the city to "(A) offer at no cost to the charter school a co-location site in a public school building . . . or (B) offer the charter school space in a privately owned or other publicly owned facility at the expense of the City School District and a no cost to the charter school. The space must be reasonable, appropriate, and comparable and in the community school district to be served by the charter school and otherwise in reasonable proximity."
***