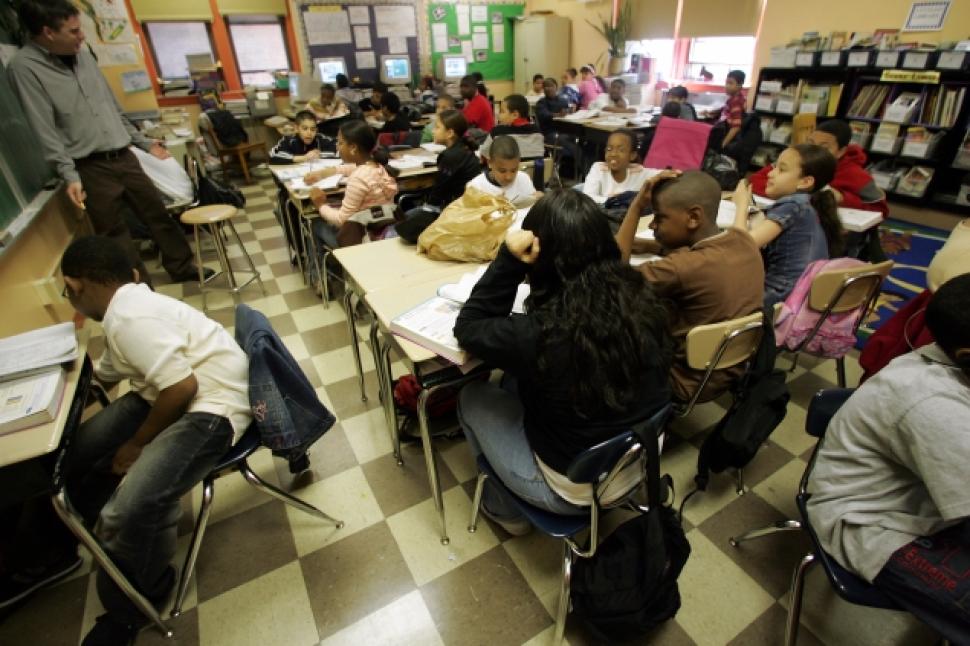 Last week Class Size Matters released a new report, Space Crunch, which analyzes the school overcrowding crisis in New York City, and points out the need to improve the City's proposed five year capital plan for school construction. While the real need for seats is likely over 100,000, the plan would create only about 38,000 new seats at most.

Among the findings in the report:
School overcrowding has worsened in the last six years, especially at the elementary grade level. Elementary school buildings currently average 97.4 percent capacity, according to the DOE's figures in its utilization report, known as the Blue Book. The median figure is at a shocking 102 percent. High schools are not far behind at an average of 95.2 percent.

What this means in real life terms is that class sizes are pushed above reasonable levels, students have lost their art, music and science rooms, are assigned to lunch as early as 10 a.m., or have no access to the gym. Many special needs students are forced to receive their mandated services in hallways or closets rather than in appropriate dedicated spaces.

Even more seats are needed to address overcrowding at the neighborhood level, as evidenced by thousands of students sitting in trailers in 21 districts, and thousands of prospective kindergarteners on wait lists for their zoned school in 19 districts. In addition, the city's population is growing fast, and the two consulting companies hired by DOE to project enrollment have predicted increases of 60,000 to 70,000 students over the next five to ten years.

At the same time, most experts believe that the utilization figures reported by the DOE are faulty and actually underestimate the actual level of overcrowding in our schools, The Chancellor has appointed a taskforce to improve the formula.

Thus while the real need is likely greater than 100,000 seats, there are only 33,754 to 38,654 seats in the proposed five year capital plan – with the latter figure dependent on whether the state's "Smart Schools" bond act is approved in November. Unless the plan is significantly expanded, our students are likely to be sitting in even more overcrowded schools in the years to come.

The capital plan is also unlikely to achieve the DOE's widely-publicized promise to eliminate trailers or temporary classroom units (TCUs). While it has been reported that "only" 7,158 students are sitting in these trailers, the actual number of these students is likely 50 percent higher – as the DOE has omitted from its count thousands of high school, middle school and elementary school students, as well as severely disabled students, who attend classes in these substandard structures in more than 40 schools.

Moreover, although DOE officials have promised that the capital plan will accomplish the goal of eliminating trailers, many of which are in disrepair and long past their expected lifetime, and have allocated nearly $500 million to remove them and recondition the school yards on which they sit, there is not a single dollar in the capital plan dedicated to replacing their seats.

The past failures of the City to adequately address the problem of school overcrowding is due to many factors, including the disappointing record of the Bloomberg administration in school construction, with fewer schools built than in earlier periods. In addition, the DOE has redefined the size of a classroom downward in recent years, which may lead to building code violations, as more and more children are squeezed into smaller and smaller spaces. This year, the city's class sizes are at a fifteen-year high in grades K-3, and the largest in grades 4-8 since 2002.

The Department of Education has also made policy choices that have worsened overcrowding; including hundreds of small schools and charter schools inserted into existing buildings, eating up classroom space through replicating administrative offices and specialty rooms. In the report, these breakdowns of policy and planning are revealed by the DOE's own data, surveys, and interviews with principals and other school officials.

The report concludes with a number of policy recommendations, suggesting how the DOE can improve the school utilization formula. These reforms, along with enhancements to the planning process, and a more aggressive capital plan funded in part by "impact fees," would help ensure that more of the city's students are provided with the space they need to learn.

We are urging the City Council to insist on expansion of the plan to at least 50,000 seats this spring -- the DOE's admitted need – and for the City Comptroller or another independent agency to undertake a needs assessment that is more credible than the DOE's. There has not been a transparent needs assessment for our schools undertaken for more than twenty years. None of the goals for improving public education, including expanding pre-kindergarten, reducing class size, providing a well-rounded education, or establishing community schools with wrap-around services, are possible without a more ambitious capital plan. Only with significantly improved planning, policies, and funding can our public school students be provided with the facilities – and the quality education – they deserve.