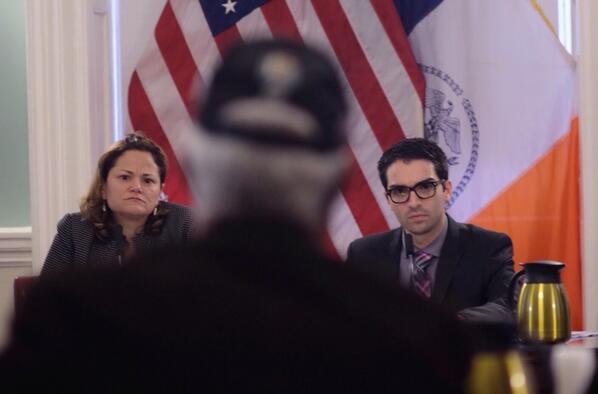 When Council Member Eric Ulrich was appointed chair of the veterans committee by Speaker Melissa Mark-Viverito in January, no one within the veterans community was sure what to expect. One of a few Republicans in a largely Democratic council, there were some vets who opposed his selection. However, during his first six months as chair, Ulrich, along with the rest of the committee, has given the committee's hearings new depth, with a seriousness and straight-forward approach that had been missing.

The result has been a renewed intensity of conversation in the veterans community and optimism for actually getting some legislation passed that will help veterans and their families. Therefore, as we rapidly approach September, this is a good moment to look ahead and discuss several possible topics the committee should consider holding hearings on over the next several months - especially given Mayor Bill de Blasio's appointment on Monday of a new commissioner of the Mayor's Office of Veterans' Affairs, former Brigadier General Loree Sutton.

Veterans Advisory Board: As was stated in the veterans' briefing paper written during last year's mayoral campaign, the Veterans Advisory Board (VAB) has had some major issues over the past several years regarding its lack of an organized or public schedule, lack of transparent communication with the veterans community, ways by which issues make it to the board's attention and up the administration's chain of command.

It's only been recently that the city finally published the board's annual reports as well as the names of those serving on the board, when the majority of members' terms were either finished or coming to an end. Therefore, as the council committee has never held an oversight hearing on the VAB, this should be considered a top priority. The council committee should explore what the board has been doing and what can be done to make it more responsive, especially including a change to the terms of appointment.

Intro. 314 – MOVA: Back in April, Council Member Ulrich proposed and submitted Intro. 314, a bill that would change the Mayor's Office of Veterans' Affairs (MOVA) into a more autonomous department. Part of the reasoning is that the change would show the public that veterans issues are taken seriously in New York City while expanding the office's current capabilities. It would also make it easier for council members to obtain funding for local veterans groups. While this legislation could possibly make it through the Council, there must be discussions between the de Blasio administration and the Council regarding this change as it would require many shifts regarding budgeting, mission and even its place in the city charter. Nevertheless, a hearing on this bill should be held to obtain input from the public, the veterans community, and MOVA leaders.

Veteran Homelessness: Last month, the Department of Veterans Affairs (VA) in New York City held its annual CHALENG (Community Homelessness Assessment, Local Education and Networking Groups) meeting, which brought together service providers, advocates, and others to identify the needs of homeless veterans and how to best meet those needs. At this meeting, Commissioner Gilbert Taylor of the city's Department of Homeless Services (DHS) talked about ending veteran homelessness in the city and it was shared that homelessness among veterans in the city has gone down from 3,500 in 2013 to 1,600 veterans as of their latest estimates. However, there has not been a hearing on homeless veterans from the council committee since November of 2011 and this would be an opportune time to hold one (perhaps jointly with the General Welfare Committee) to get an update on what the administration is doing; how it's working with the VA; and where they are in regard to the U.S. Department of Housing and Urban Development's (HUD) Mayor's Challenge to End Veteran Homelessness.

Intro. 426 – Benefits Counseling Services: Also last month, Council Member Ulrich introduced legislation that would place benefit counselors in each borough to assist veterans and their family members with VA disability claims and other related issues. With the recent loss of MOVA's three benefit counselors and the continued high number of claims pending at the VA, this bill deserves a hearing. This would also coincide with Governor Cuomo's announcement at the New York Veterans and Military Families Summit last March of the establishment of a statewide "Strike Force" to expedite federal disability claims for New York veterans and their family members.

Veterans and STEM: At the beginning of August, the 2nd Annual Executive U.S. Science, Technology, Engineering, and Mathematics (STEM) Summit took place here in New York City. Leaders gathered from around the nation to discuss how to improve STEM education and the rising concern about future challenges and potential shortages in the workforce. Veterans have been identified as a source of motivated, skilled talent that can help address the decline of the technical workforce and an article in Forbes last year stated that New York City topped the list for STEM jobs. Also, Task and Purpose recently published an article about the new White House STEM initiatives including job training for veterans. Therefore, the council committee should consider holding a hearing on how the city can work with CUNY, as well as other colleges and interested parties, to encourage veterans to utilize the GI Bill to pursue post-secondary degrees in STEM fields and build upon the technical skills gained from military training and experience.

The City Council Committee on Veteran Affairs should also consider a hearing regarding veteran unemployment and others related to veteran-owned businesses.

Yes, this is a fairly hefty agenda and by no means do I or other members of the veterans community expect it all to happen in the fall. However, if the committee continues to approach veterans issues seriously, can hold hearings on a regular basis to look at these issues, and even move a few pieces of legislation, the next several months will be a success and continue to build on the positive work it started in the first part of the year. I believe this committee is up to the challenge.