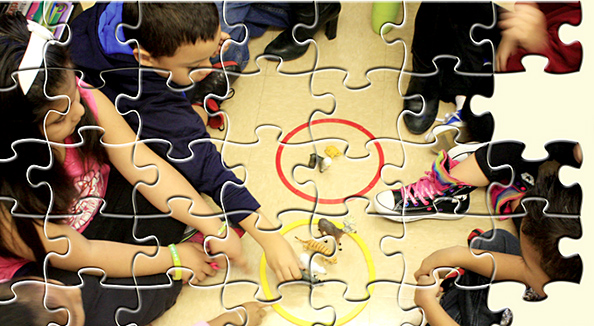 When you ask the people running childcare and early education programs for low-income kids what would help their all-important work most, the predictable answer is: more money. And the experience of EarlyLearnNYC, the City's much-ballyhooed revamping of subsidized programs for kids from 6 weeks to 4 years old, shows that while instruction standards have been raised, funding not only hasn't kept pace; one effect is that teacher take-home pay has, perversely, been reduced.

The good news – contained in our recent Center for New York City Affairs at the New School report on EarlyLearnNYC's mixed record since its 2012 launch – is that there's a lot we can do to financially shore up early childhood education using already existing funds. The key is getting more kids currently eligible for subsidized programs enrolled in them – a goal that EarlyLearnNYC has struggled to meet. In fact, enrollment in child care programs that hold contracts with the City crashed in the first months of EarlyLearnNYC, plummeting below 80 percent of the system's total capacity. That number has slowly climbed back up to 89 percent over the past year-and-a-half – but that still leaves more than 4,000 subsidized child care slots sitting empty.

We've identified how, with a little entrepreneurial effort and red tape cutting, the City can recapture tax dollars for quality early education that are now all too often being spent for little more than informal babysitting.

Here's the deal: Federal law requires the City to provide childcare vouchers to parents making the transition from receiving public benefits to holding jobs. Since 1999, the number of kids covered by such vouchers has jumped by more than two-thirds, to nearly 57,000.

Parents are legally entitled to use those vouchers any way they see fit – and today the overwhelming majority wind up paying friends or family members to mind their tots during the workday. That's a huge missed opportunity to reach and teach kids whose brains are sponges for knowledge and who aren't getting the exposure to learning they need. It's also a pretty poor return on what's expected to be an outlay of $367 million in tax dollars ($67 million raised directly from city tax levy) over the next 12 months.

Our formula for changing that has two key elements. The first requires getting two major city agencies – The Human Resources Administration that manages childcare vouchers and the Administration for Children's Services that oversees EarlyLearnNYC – consistently on the same page. When they have worked together to encourage parents to use vouchers for EarlyLearnNYC programs, they've produced positive results. The goal should be making such cooperation, reinforced by targeted social media outreach and mass media ad campaigns, the rule rather than the exception it now is.

The second reform we propose is: Make it easier for parents to enroll youngsters in EarlyLearnNYC. There's no doubt that the current way-too-cumbersome enrollment process can be made simpler, quicker, and more convenient without any serious downside. The discouraging schedule of parent co-pays for EarlyLearnNYC – now as high as $3,000 a year for families making less than $25,000 – also needs to be made more financially realistic.

Getting more kids in EarlyLearnNYC would be a win for them, and also for their parents, for early childhood education programs, and for the city as a whole. It would prime thousands more kids for success when they move on to the city's expanded all-day pre-kindergarten classes.

It would also strengthen the case for upping funding for early childhood learning. The mavens are absolutely right when they say they need more money. We think they'll have an even better argument to make by working with the City to aggressively, creatively, and cooperatively increase EarlyLearnNYC's now foundering enrollment.

***
Kendra Hurley and Abigail Kramer of the Center for New York City Affairs at the New School are authors of the new report, Big Dreams for New York City's Youngest Children: The future of early care and education