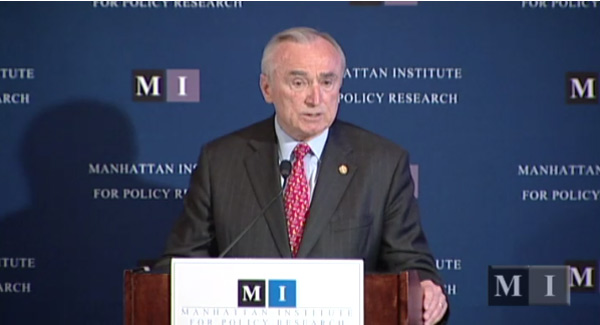 Peel's principles make no reference to a law enforcement approach resembling the "broken windows" theory promoted by Mr. Bratton, that a focus on low-level infractions like jaywalking, spitting on the sidewalk, or holding an open alcohol container will lead to a reduction in serious violent offenses. Nor does Mr. Peel mention the kind of numbers-driven policing that characterizes so much of the activity of NYPD officers.

I wonder what Mr. Peel and, in fact, Mr. Bratton would think about my recent conversation with a current New York City cop. While making a deposit at a bank near my office, I overheard the police officer posted there explaining to two tellers what the cops responsible for Eric Garner's death did wrong.

Interested in hearing more of his specific thoughts, I asked what he would have done differently. "First," he said, "you take your time and talk, your initial steps to persuade the guy to think better of sticking with his first impulse which is to object to the arrest. 'We can do this the easy way,' you say, 'or we can do it your way.' Then you explain that you have backup and that 'it won't be a fair fight, it's never a fair fight.'"

In addition, the officer explained, "you always take it very seriously when the person says something like 'I can't breathe', even if you think he's faking it. It's too dangerous not to."

I commented that it was especially troubling that the infraction involved, selling loose cigarettes, was so minor. "You know," the officer responded, "I'll be honest with you" -- a phrase that he repeated twice during our conversation -- "there are quotas. Each precinct has a conditions squad and they're under pressure to make their numbers. Arrests or tickets for quality of life things."

At this point in our back and forth, he was talking freely. Some of his other revealing thoughts and comments included:

-Quotas for evaluating police performance are 'unwritten', but each precinct has them and they are different for each neighborhood. So the numbers that the 'higher ups' expect you to meet are higher say, in Harlem, where he used to work than in Midtown Manhattan where the bank is located.

-"It is easier to arrest a black or brown kid" in Harlem. He stated that he would not under any circumstances arrest an Orthodox Jewish person from Brooklyn, where he also used to work. "They will make a cop's life miserable," he said, because they're well organized and can draw on their political connections.

-Once, due to an urgent family situation, he asked for an unplanned day off. "Like to help you out," his supervisor said, "but I have to check on your activity." 'Activity' is a code word for arrests, summonses, and stops; in other words, the officer would qualify for the day off only if he had met his quota.

-When I asked whether the quota system within the Department credited officers for positive activities like breaking up fights, settling disputes, or directing people in need of services like the homeless or mentally ill to places that offer appropriate services, he said no, only for sanctions like 'collars' or tickets.

-He said that sometimes you can see the trail for "quality of life" directives, pressure from headquarters to borough commanders, precinct captains to lieutenants, and sergeants to cops on the street.

-"I became a police officer because I wanted to help people," he said, "but the job doesn't support it." He shook his head. "I want to do the right thing but I'll get hanged for it."

I do not know exactly what "I'll get hanged for it" means here. I am fairly certain, though, that the officer referred to an on the ground culture within today's NYPD that is antagonistic to activities aimed at helping or befriending members of the community. I am also fairly certain that Mr. Peel and, for that matter, Mr. Bratton would not approve of such a police department. The key challenge for Mr. Bratton and for his boss, Mayor Bill de Blasio, and for all New Yorkers is how to create an NYPD that actually adheres to the "Peelian" principles and that fosters an institutional environment that rewards rather than intimidates officers who seek a constructive relationship with the people whom they are sworn to serve and protect.