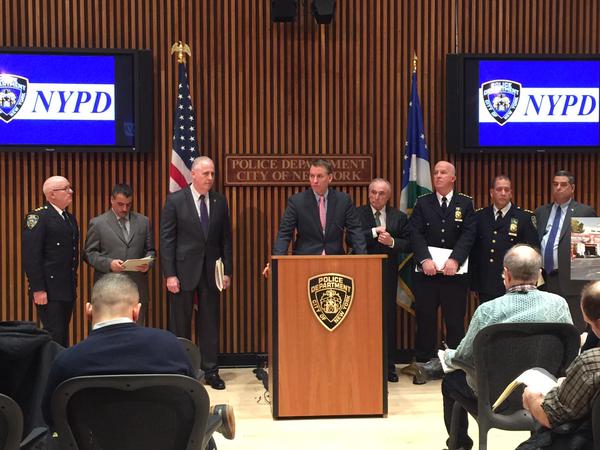 Even with the publicized results of the recent work slowdown by officers — cops stopped arresting and ticketing people for minor infractions and crime went into a steep decline — Mayor de Blasio continues to defend 'broken windows' policing. A serious moral and political lapse by the city's most progressive mayor in at least 20 years.

The NYPD's quota-driven, 'broken windows' practices target low-level, often innocuous activities like carrying an open alcohol container, walking between subway cars, begging, and jaywalking. A mockery of justice, now exposed in an "emperor has no clothes" moment as ineffective, 'broken windows' policing everyday inflicts harm and hardship on hundreds, if not thousands, mostly low-income people of color. This stark racial bias which includes the aggressive bullying of marginalized groups like the homeless, sex workers, the mentally ill, street vendors, and LGBT youth prevails without, for the most part, organized opposition or outcry from any quarter, including the good people working within the system. Relevant are the telling words from Martin Luther King Jr., whose birthday we just celebrated: "In the end we will remember most not the voices of our enemies but the silence of our friends."

The daily racial bias and injustice of the system is undeniable. Here are sample statistics that we have culled from the NYPD and other government agencies that indicate how 'broken windows' is enforced and why it must end:

-From 2008-2011, the police issued an average of eight bike-on-the-sidewalk summonses in Park Slope, Brooklyn. During the same time period, for these kinds of tickets the annual average in Bedford-Stuyvesant, Brooklyn was 2,050.

-95 percent of the people incarcerated on Rikers Island are black or Hispanic, confined because of two main factors: the NYPD arrested and locked them up; and they were too poor to make bail.

-In 2011, the height of the NYPD's use of stop-and-frisk, black and Hispanic males between the ages of 14 and 24 accounted for 41.6 percent of stops even though they are only 4.7 percent of the city's population. The number of stops of young black men in 2011 exceeded the entire city population of young black men — 168,126 stops compared to 158,406 people.

Compounding the harm done by 'broken windows' policing are the collateral consequences of these petty arrests and summonses: loss of one's job or time at work, denial of access to scholarships or public housing, loss of child custody, even deportation in some cases. More than any current government policy or practice, 'broken windows' causes and reflects the everyday social, economic, and racial inequities that afflict our city. 'Broken windows' policing and its consequences represent "a tale of two cities" writ large.

The significance of now, of this moment is that it is the first time in the city's history that the issue of abusive and biased policing is front and center in the political landscape and the policy debate. Previous outcries focused on egregious incidents of police brutality and excessive force such as the shooting deaths of Amadou Diallo and Sean Bell. Never before has there been a sustained and highly visible movement aimed at exposing and correcting the daily systemic practices that compromise the lives and well-being of people, practices that serve to devalue the worth and lives of black and Hispanic people and create the circumstances wherein it is inevitable that fatalities occur at the hands of police officers.

In sum, here's the bad news: these terrible and unjustifiable practices have persisted for decades, are indisputably racist and deeply immoral, represent a dark stain on our city's legacy and question its reputation as a diverse and welcoming metropolis.

But here's the good news for Mayor de Blasio and the rest of us: because of the growing attention on this issue; because more and more people outside the community most often victimized are aware of abusive policing and its widespread ill effect;, because the affected constituency is actively mobilized in the movement for sweeping reforms; and because the NYPD work slowdown has exposed the myth of 'broken windows' as a successful crime reduction strategy — all unprecedented developments — New York City has an historic opportunity to fully redress long-standing injustices and to create public safety measures that bring together community groups, public and non-profit service providers, and law enforcement, and that make significant progress toward establishing a truly inclusive and equitable city. The first step is an end to 'broken windows.'