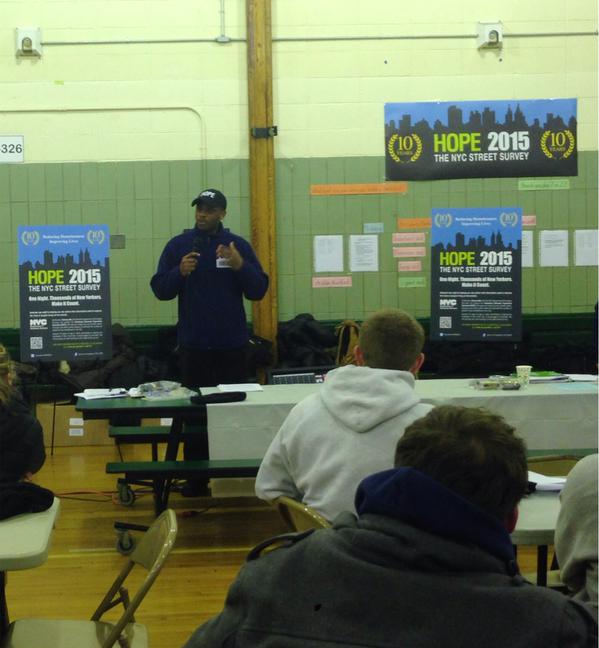 "You introduce yourself, give them your card and ask them if there's anything they need," says Hilton Douglas, an Urban Pathways outreach worker. "Sometimes they tell us to get out of their face, but you just have to keep engaging with them day in and day out. Other times you catch them at the right time and with the right tone, and they open up."

On day one of Port Authority Bus Terminal outreach work this past September, Urban Pathways staff engaged Mark H. His body was covered with open sores, including some on his left leg infested with maggots. When outreach approached him, he insisted he did not need help. After outreach workers found him 24 hours later, he agreed to go to the Olivieri Drop-In Center where he got a shower and new clothes and met with a nurse. He also agreed to go to the hospital where he was diagnosed as a paranoid schizophrenic.

The second important component of outreach work is placement. For Mark H, placement was a return home to his family. After initial assessment, Olivieri staff discovered he was the subject of a six-month, Ohio missing person report. Once staff contacted the local Ohio sheriff office and Mark H was stabilized, his brother came and took him home.

The placement that occurred for Mark H is infrequent though. More often, street homeless individuals are placed in drop-in centers or city single adult shelters. There, with the invaluable assistance of case managers, they stabilize and work to become housing-ready and move along the path to self-sufficiency and permanent housing.

However, many homeless adults living on the streets are unwilling to enter the city shelter system. They fear they will be victimized. Or, they may be seriously impaired due to mental illness or substance abuse and unable to commit to treatment or recovery as a condition to accessing shelter. For this chronically homeless population, the City offers safe havens, which operate using the housing first model – an approach that centers on providing the homeless with housing as quickly as possible and then providing services as needed.

Safe havens constitute a particularly viable placement option. Beside providing shelter and services, they allow for a transitional period to begin the rehabilitative process and recovery from the harshness of the streets. New York City has recognized the utility of safe havens. There are ten in four boroughs - three in the Bronx, four in Manhattan, two in Brooklyn, and one on Staten Island.

As the City and State move forward in budget season, let's make HOPE truly count by adequately investing in these placement options. It is encouraging that the City will devote more resources to unsheltered homeless people this year, allocating more than $45 million in City and State funds, up from $35.5 million the year before. It is less than encouraging that the City and State have not adopted a new City/State supportive housing agreement. In particular, we call on the State, notably Governor Cuomo, to amend the proposed state budget and fully fund the State's share of a New York City/State supportive housing agreement. The time is now to account for and support all those counted during this year's HOPE and those before.

***
by Nicole Bramstedt and Erik Ipsen

Bramstedt is the Policy Analyst at Urban Pathways.
Ipsen is a member of the Board of Urban Pathways, where he has served since 2002.