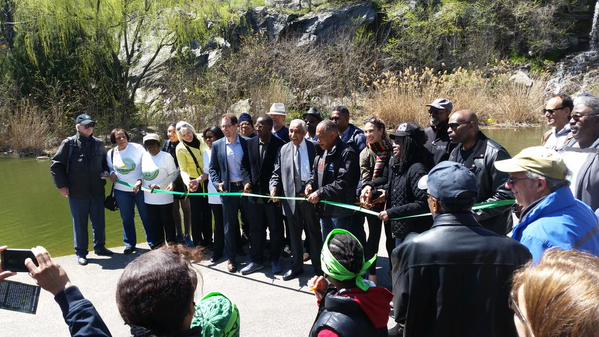 New York is embarking on a building boom, and upzoning neighborhoods around the boroughs, with the laudable goal of making the city more affordable. But will it be more livable?

The answer depends, in part, on whether we plan for green space and open space to match all the new construction. With residential towers set to rise in at least 15 neighborhoods in line for new zoning, and the pace of building picking up city-wide, it's critical that we account for the infrastructure of public life. This means investing in new parks, playgrounds, street trees, and "green" features like bioswales as our city expands.

But the mayor's proposed 10-year capital plan doesn't ramp up investment in these critical needs - it actually cuts spending as compared to the past decade, according to a report released by the Center for an Urban Future. These cuts are bad news for public green space long-term, but day-to-day it's the spending on maintenance and operation of parks which matters most to New Yorkers.

On that front, there is some welcome news in the mayor's budget, which provides much needed increases in funding for parks enforcement officers and tree maintenance. Unfortunately, though, the proposed Parks Department budget for next year currently includes cuts to the ranks of gardeners and maintenance workers - even in those parks which are part of the important Community Parks Initiative. The mayor's budget also fails to add desperately needed funds to the Green Thumb Program, which provides vital programming and support to the City's more than 600 community gardens.

And with personal injury claims at public playgrounds higher than they've been in a decade, the budget fails to add funds for additional playground associates - much-loved staff who improve safety for kids and reduce liability for the city.

These budget cuts will hit parks in low- and moderate-income neighborhoods particularly hard since they don't benefit from the private funding which supports parks in wealthier areas. Regional parks like St. Mary's in the Bronx or Astoria Park in Queens, which serve as anchors for their communities, will be left particularly wanting. We propose funding a master planning process for such mid-sized parks to make sure they get the investment they deserve.

These critical funding needs hardly constitute an exorbitant shopping list. In fact, all together they would take parks from a paltry 0.55 percent of the city's budget to 0.57 percent.

When you consider the profoundly positive impact parks have on city life, this is surely a bargain. Parks are essential to healthy communities. They give families ways to relax and connect, and to form ties that can unify the city. They promote exercise and environmental sustainability.

But to achieve these benefits, parks need resources. We need a budget that reflects this reality, with funding for the workforce that makes our parks thrive: gardeners, maintenance workers, safety officers, lifeguards, park rangers, playground staff, and more.

Yes, it is indeed possible for New York City to grow while becoming a more equitable and livable place. But, this can only happen if we invest in the public green spaces that are so critical to a healthy life. On Wednesday at 11 a.m., you can us, New Yorkers for Parks, fellow parks enthusiasts, and members of the City Council for a rally at City Hall, where we'll continue the call for more parks funding in the budget.