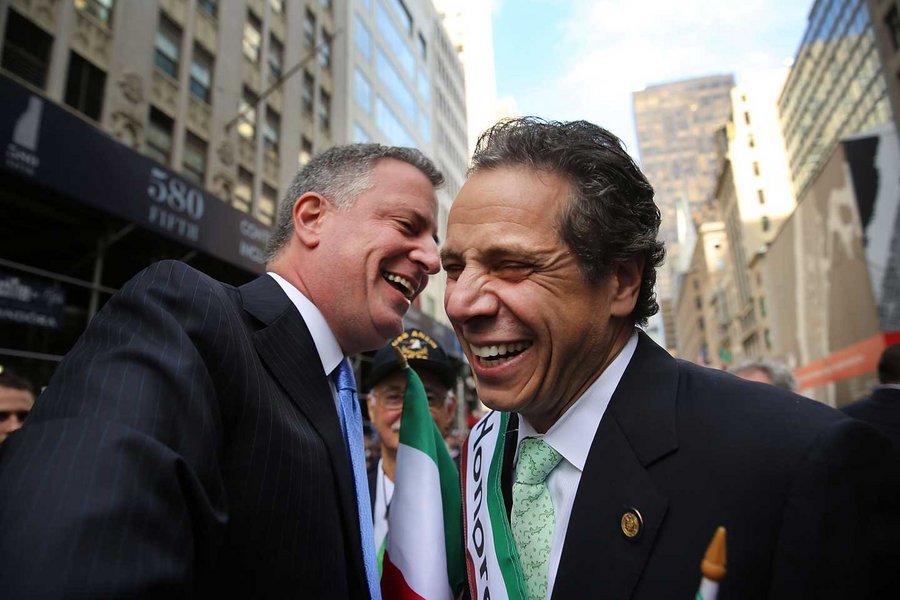 The Mayor & the Governor in happier times (photo: Spencer Platt/Getty)

Cuomo helped sidetrack de Blasio's proposals for affordable housing and multi-year extension of the mayor's authority over city schools. In the spring, an unnamed source in the Cuomo administration -- possibly the governor himself -- called de Blasio "bumbling and incompetent."

Late in June, in an interview on NY1, de Blasio unloaded his frustrations about the governor: "he engaged in his own sense of strategies, his own political machinations, and what we've often seen is, if someone disagrees with him openly, some kind of revenge or vendetta follows."

The heated rhetoric has raised concerns. As has a lack of coordination on key matters related to public health and transportation. New York's governor and the mayor of its largest state need to get along for the welfare of both entities.

But there is a built-in historical tension in the relationship. The mayor governs the city. Yet state aid is essential to city finances, the state's Metropolitan Transportation Authority operates city subways, rent control falls under the auspices of the state Division of Housing and Community Renewal, and the state has other oversight and control mechanisms.

Usually, the relationship between the governor and the mayor is marked by reluctant cooperation and pragmatic compromises. De Blasio and Cuomo can look toNew York history to find helpful models.

For instance, Robert F. Wagner, mayor 1954-1965, often traded barbs in the press with Republican governor Nelson Rockefeller. But that did not prevent them from making behind-the-scenes deals when it served both their interests. When Wagner needed more state aid or expanded taxing power to support city services, he was usually able to persuade Rockefeller and the legislature to come to his assistance. In 1960, Wagner orchestrated a newspaper campaign showing that the city was getting short changed on state aid. The stories included a coupon readers could clip out and mail to Rockefeller in protest. The governor chafed at the pressure, then gave in and at the last minute boosted state aid to the city by $81 million. Rockefeller and Wagner appeared together to announce the deal, and share the credit.

Early in 1950, work on the New York State Thruway, begun in 1946, was stalling due to lack of funds. Governor Thomas Dewey, a Republican, proposed a new state Thruway Authority empowered to issue up to $400 million in bonds to build the superhighway, to be repaid by tolls. Public skepticism mounted. That would amount to "little more than a shakedown of the motorist," fumed the Automobile Club of New York. Democrats in the legislature vowed to block what they called "Dewey's Upstate Boulevard."

The governor needed help. In March, after a number of meetings, a deal was brokered by New York City transportation chief Robert Moses. Dewey agreed to connect the Thruway to the Major Deegan expressway, giving it entree into New York City, and to speed construction of expressways in New York City, using state and federal funds. O'Dwyer endorsed Dewey's proposal, undercutting Democrats' plans to block Dewey since most of the Democrats in the Assembly came from New York City. Asked whether it would put him in conflict with Democrats who had opposed it, O'Dwyer deadpanned: "I wouldn't know anything about that. I'm a city manager." Dewey professed surprise at allegations of political maneuvering. The Thruway would mean safe travel and, he explained, "I can't see anything political in saving lives." The legislature approved Dewey's proposal. Dewey appointed David J. Martin, a New York City real estate developer and political ally of mayor O'Dwyer, to the newly-created Thruway Authority.

In other cases, the relationship has seemed like a political kabuki dance.

For instance, in 1910, the state developed plans to build the Mohansic State Hospital in Yorktown Heights, Westchester County. John P. Mitchell, who became New York City mayor on a "fusion" ticket in 1914, initially supported it because it would serve people from his city. But as construction was about to begin, the New York Times and other city papers began asserting that sewage from the facility could pollute the city's water supply at the Croton Reservoir, though it was several miles away. Mitchell suddenly reversed himself, saying that the city would oppose anything that would "permit its citizens to drink polluted water." Governor Charles Whitman, a Republican, publically rebuked the mayor, saying his views were "far from expressing the real facts" and explaining that the systems for treating sewage were more than adequate. Mitchell escalated his criticism and threatened to get a court order to stop the project. The controversy grew heated. New York City residents would resist "the privilege of drinking such sewage," said the Merchants' Association.

Whitman put the project on hold and asked for legislative guidance. In 1917, he reversed himself and came over to Mitchell's view, asserting that polluted water could become "a constant and dangerous menace" and should not "become commingled" with New York City water lest it lead to "an epidemic of disease." Both the mayor and the governor exaggerated the threat and pandered to unwarranted public fears. But the legislature killed the project, opting instead to expand Middletown state mental hospital, several miles north and on the opposite of the Hudson from the Croton watershed. Expansion of a small boys' school on the Mohansic location was authorized, but the rest of the site was transformed into a park and transferred to Westchester County. It was deeded back to the state in 1957 and renamed Franklin D. Roosevelt State Park in 1982.

In still other cases, the relationship has been mostly sour. For example, Governor Rockefeller disliked and distrusted Mayor John Lindsay, whom he regarded as incompetent and a loose financial manager. Lindsey thought Rockefeller was autocratic and tight-fisted on New York City aid. Elected as a Republican in 1965, Lindsay switched to being a Democrat in 1971, and the political rivalry with the governor escalated. "I wish Lindsay would become an actor and leave the governance to me," Rockefeller remarked to GOP state chairman Richard Blum. In 1971, after Lindsay exploded in the press about Albany's holding the city in a financial vicegrip, the governor responded, "He's not responsible for what he's saying...The poor man has been under a lot of pressure."

Cuomo's response to de Blasio's NY1 interview had an air of condescension. "I understand why he's frustrated. I get frustrated, but we have a situation in Albany where you don't always get everything you want. That's called life. It's clear that his style is to air his public frustration."

The confrontational tone of the governor's and mayor's comments does not bode well for the future of the relationship.

It's time for the governor and the mayor to turn away from the sort of bickering and impasse that have characterized the relationships between some of their successors. They need to return to the historical tradition of discussion, negotiation, and compromise, sometimes including political competition and public posturing, but in the end settling on policies that benefit both the city and the state.

Have an op-ed idea or submission for Gotham Gazette? E-mail editor Ben Max: This email address is being protected from spambots. You need JavaScript enabled to view it.