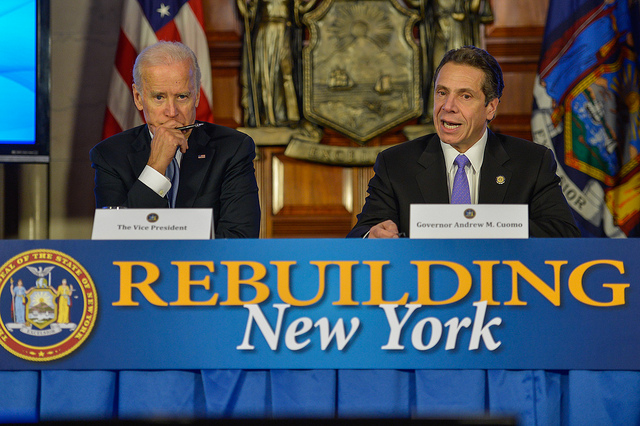 New Jersey officials met with U.S. Secretary of Transportation Anthony Foxx on August 18 to discuss strategies for building new rail tunnels under the Hudson River between New Jersey and New York. The existing tunnels, over a century old, were damaged by Superstorm Sandy in 2012 and recently experienced electrical failures and train delays.

Governor Andrew Cuomo has been pressuring the federal government to pay what he refers to as "the lion's share" of the costs for the new tunnels. It isn't clear whether Cuomo wasn't invited or chose not to attend the August 18 meeting. He had told reporters a week earlier that any meeting would be premature until Washington committed to a sizeable investment in the project. "There's no reason to meet now," he said snappishly. "They need to put their money where their mouth is."

After the meeting, the heated rhetoric cooled a bit. In a statement on August 19, Cuomo hailed the meeting as a step in the right direction but reiterated "I strongly support the construction of the new Hudson River tunnel – and a federal grant package that makes the project viable is an essential first step." A spokesman for Secretary Foxx responded that "As the governor knows, the federal government doesn't just issue grants without a fully defined scope, project, and applicant and at the present time there isn't a fully defined project or applicant we can even grant money to."

We can hope that the tone of the dialogue will continue to get more positive and New York, New Jersey, and federal officials will get down to concrete negotiations. The need is critical and, as Cuomo has pointed out, there have been many inconclusive meetings over the years to address it.
But looking back through history, federal aid to big New York projects has been an inconsistent story.

In the early 19th century, New York sought federal aid to build a cross-state canal. A delegation of New Yorkers lobbying Congress in 1812 found little support and noted resentment that "the envied state of New York" was "a supplicant for the favor and a dependent on the generosity of" the federal government rather than using its own resources. Five years later, partial funding was included in a bill that passed Congress, only to be vetoed by President James Madison. He found no authorization in the Constitution for federal support for "watercourses," the president said. Canal advocate DeWitt Clinton, the Mayor of New York City, described the veto message as "a miserable sophism...reprehensible conduct" motivated by sectional rivalry and "jealousy of the growing prosperity of New York."

A resentful New York stopped asking for U.S. assistance. Clinton was elected governor in 1817, and the state built the Erie Canal with its own resources.

In 1975, New York City was on the verge of bankruptcy due to overspending, financial mismanagement, and banks' unwillingness to provide additional loans to the city. Gov. Hugh Carey established the Municipal Assistance Corporation and an Emergency Financial Control Board to oversee the city's budget and provide investors with assurance that funds lent to the city would be repaid.

To obtain additional needed funding, the city sought a federal guarantee of its securities. President Gerald Ford, who was critical of the city's profligate spending, refused to consider what he termed a "bailout." That led to a now-famous New York Daily News headline on Oct. 30, 1975: "FORD TO CITY: DROP DEAD."

Ford did not actually utter those words but he believed his stern position would help force New York City to mend its fiscal management. An indignant Carey complained in a speech a few days later that "it isn't fair when the President of the United States hauls off and kicks the people of the City of New York in the groin." But the next year, as state oversight and city budget reductions began to improve the situation, Ford declared that New York had "bailed out itself." He agreed to federal loans to the city.

Carey learned from the process. In 1979, when the state was desperately seeking resources to aid in the cleanup of the Love Canal area in Niagara Falls, the governor persuaded president Carter to declare the area a federal disaster area, which freed up modest federal resources. The next year, a confidential study of the toxic site by the federal Environmental Protection Agency was leaked to the New York Times. It reported alarming evidence of cancer and chromosome damage. Hooker Chemical, which had dumped toxic chemicals in the abandoned canal, covered them over, and then sold the land to unsuspecting purchasers, was the main culprit. At about the same time as the EPA study, though, reports surfaced that the Army had dumped chemicals at the site during World War II. The Defense department denied it, but it provided just a whiff of federal culpability.

Carey saw an opportunity: use the report to renew pressure on the federal government to pay for relocation of residents who were panicked by the EPA report's alarmist message. "Permanent relocation away from the contaminated area is the only reasonable way to deal with the trauma being experienced by area residents," he told the press. It was a neat political pivot, directing attention away from the state's response to the crisis and toward President Jimmy Carter.
Politics played in New York's favor. Carter, running for reelection in 1980 and trailing challenger Ronald Reagan, needed the Empire State's votes. In October of that year, he flew to Niagara Falls to sign legislation authorizing massive federal aid to supplement state resources to relocate residents and contain the toxic chemicals. (Carter carried Niagara County in the election but lost New York and the election to Reagan.)

The projected price tag for the Hudson tunnel work -- $14 billion -- is itself evidence of the need for federal help. New York officials are on something of a roll, having secured federal aid for the cleanup after Sandy and assistance in the construction of the new Tappan Zee bridge. This time, New Jersey will be an ally and a partner, and it can be argued that the tunnels are critical corridors in the nation's transportation infrastructure.

History suggests, however, that politics and perception are always factors when it comes to federal assistance to New York. Arguably the nation's historically most significant state, and given to assertive self-confidence, New York is often regarded by outsiders as being able to take care of itself. Usually, it can. But other times -- and the Hudson River tunnel is a good example -- we can legitimately ask for federal assistance.