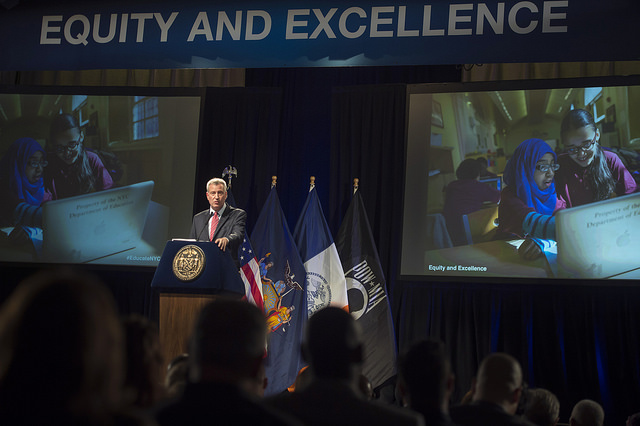 When Mayor Bill de Blasio announced Wednesday that the city will invest $81 million to ensure all New York City students have access to computer science classes, he took a major step towards preparing those students for the high-tech world of work they will eventually enter.

It is a long-needed commitment – enhanced by philanthropic support – to bring quality STEM (science, technology, engineering and math) coursework to every neighborhood and every student in the city. The mayor is right to be critical of our current education system where only five percent of public school students now get access to computer science. As the mayor said, "too many students are learning to type instead of learning to code."

At Brooklyn Tech High School, the commitment to creating the future leadership of computer science and programming was on display this month when four Brooklyn Tech students won one of the top prizes in the recent PennApps hackathon in Philadelphia. The students finished third in the world's largest such annual competition, which this year drew more than 2,000 participants on teams from 147 colleges and graduate schools from 11 countries and 24 states.

The success of the four Tech students – senior Mary Karroge and juniors Ben Spiegel, August Trollback and Kevin Zhang – underscores the commitment Brooklyn Tech has made to computer science. The students won for developing a coding system called SemQuery, which uses structure and semantics instead of conventional textual searches that enhances flexibility by enabling users to construct more efficient, accurate, and language agnostic queries than the current textual or regex-based searches.

If you ask me to explain in detail what the students presented, I would be stuck going beyond the buzzwords. I was a chemical engineering major at Tech, but that was in the 1960s, a time when we still used slide rules and carbon paper, and sometimes even counted on our fingers.

But their recent win at a worldwide college level hackathon shows how important and relevant Brooklyn Tech remains today to advancing the education of our city's students coming from working class, immigrant, and poor families. Most of Tech's students qualify for free or subsidized lunch, a measure of poverty.

As proud as we are of our Tech students – who benefit from the most rigorous and challenging STEM-based curriculum in the city and beyond – we know that there are talented students across the city in every neighborhood that will benefit from the program announced by Mayor de Blasio.

Many other elements in the program the mayor announced show that commitment, which is consistent with his earlier expansion of universal pre-kindergarten programs to make New York City kids the best prepared for the future. Insisting that every child be offered algebra – the precursor of all advanced mathematical, technical and scientific education – by the ninth grade is essential as well.

The city must go further, to insist that every district and neighborhood in the city include the kind of gifted-and-talented programs in elementary schools that allow students from every ethnic and racial background, and from every economic background, to succeed on the Specialized High School Admissions Test used for entrance to the city's eight most competitive high schools and to succeed in those schools' demanding curriculum.

But it is still the case that your chances of educational success are too closely correlated with the neighborhood you grow up in, an utterly unacceptable circumstance that hobbles chances to attack the persistent social and economic inequality the mayor has committed his administration to attacking.

(I would be remiss if I did not point out, though, that the city once again has provided only 87 percent of the funding Brooklyn Tech is entitled to under allocation formulas, continuing to shortchange talented working class students from all over the city who deserve the full support to which they are entitled.)

Still, the commitments announced by the mayor to ensure that all students get the opportunity to succeed in a quality STEM-based curriculum is a critical step in closing the digital divide. We all benefit if it succeeds.