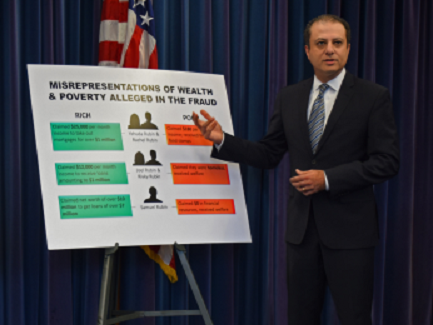 Ex-Queens Assemblymember William Scarborough is the latest New York State legislator to be convicted of corruption. Scarborough, a lawmaker for two decades, filed 174 phony travel vouchers between 2009 and 2012 to receive more than $54,000 in unwarranted per diems. He put in for travel reimbursements on some days when he was at home in his district, not in or in transit to Albany.

Scarborough resigned his Assembly seat after being indicted last spring. He was sentenced to 13 months in federal prison for his crimes. He also received a year on state charges for misuse of campaign funds, which will be served at the same time as his federal incarceration.

But at his sentencing, U.S. District Court Judge Thomas A. McAvoy was almost apologetic for imposing the prison term. "I think essentially you're a good, decent human being who just made a mistake...a good representative of the people," he told Scarborough.

Since 1999, more than 30 state lawmakers have been forced from office due to ethical misconduct or conviction for crimes. Earlier this year, the Speaker of the Assembly and the Majority Leader of the Senate were both indicted and forced from their leadership posts.

But Judge McAvoy's comments remind us of how complicated New York politics can be. Scarborough was both a good representative of the people in his district and also a crook. New York is a politically complicated place. Appearances can be deceiving. Sometimes, legislative corruption and progressive legislation exist side by side.

Albany politics from a century or so ago provides some useful comparisons and insights.

History books often focus on corruption in the legislature in the last years of the 19th century and the opening years of the 20th, including corporations influencing legislators to secure beneficial legislation and political "bosses" unresponsive to the people heading both parties.

Senate Majority Leader Jotham Allds resigned in disgrace in 1910 after it was revealed that he had taken a bribe to kill a legislative proposal when he had been in the Assembly years earlier.

Governor William Sulzer was impeached and removed from office in 1913 for misuse of campaign funds. Legislative investigations and newspaper revelations turned out other instances of influence peddling, misuse of state funds, or other misconduct.

But during the same time period, from the late 1890s to about 1914, under governors, legislative leaders, and political bosses from both parties, the state legislature passed progressive legislation that surpassed any other state.

On the Republican side, governor Charles Evans Hughes (1907-1910) was one of the most progressive governors in the nation. He set a high tone for ethical government, reminding his fellow New Yorkers in his inaugural address that "We subordinate individual caprice to defined duty."

On the Democratic side, as historian Terry Golway demonstrates in his book "Machine Made: Tammany Hall and the Creation of Modern American Politics," Tammany Hall, often pilloried as the embodiment of corruption, quietly backed reform measures that benefitted its urban constituency. Two Tammany Democrats destined for future greatness rose to leadership positions-- Senator Robert Wagner became Majority Leader and Assemblymember Alfred E. Smith became Assembly Majority Leader in 1911 and moved up to Speaker in 1913. Wagner later went on to a distinguished career as U.S. Senator, and Smith later became one of New York's most effective governors.

For instance, the legislature passed the state's first gun control legislation, in 1911, sponsored by a Tammany stalwart and sometime scoundrel, Assemblymember Timothy Sullivan.

It created the first state labor department in the nation.

Legislation placed severe restrictions on child labor in 1903. The legislation was quietly championed by one of New York's least remembered governors, Republican Benjamin B. Odell (1901-1905).

In the wake of the tragic Triangle Shirtwaist Factory fire in New York in 1911, the legislature passed a suite of industrial fire and safety regulations that made New York the model for the rest of the nation. Wagner and Smith headed the legislative commission that investigated factory working conditions after the fire, shaped the legislation, and shepherded it through the legislature.

In 1910, New York passed the nation's first workers' compensation law, guaranteeing partial wages and support for medical expenses to workers injured on the job in a range of occupations.

Another law unified state education oversight through creation of the State Education Department.

A law was passed establishing the Health Department with broad responsibilities for public health.

Legislation was enacted that set standards prohibiting the construction of overcrowded tenement buildings and requiring adequate ventilation and fire safeguards in housing construction.

A law was passed that established the Public Service Commission to regulate railroads and other public utilities.

Insurance and banking regulations were enacted or substantially strengthened.

Corrupt practices were rampant in the legislature in that era. Sometimes, there was political logrolling and occasionally do-over's. For instance, the worker's compensation law was declared unconstitutional in 1911 by the State Court of Appeals. Within two years, however, the legislature passed and voters ratified an amendment to the constitution which made it acceptable.

These accomplishments reflect the progressive spirit of the times: negotiation and pragmatic compromise between the two political parties, keep government responsive, reform it to meet real problems, use government to keep New York in the forefront of the nation on social and economic reforms. Looking back over New York State's long history, legislative accomplishments and unethical behavior sometimes seem to flourish almost side by side.