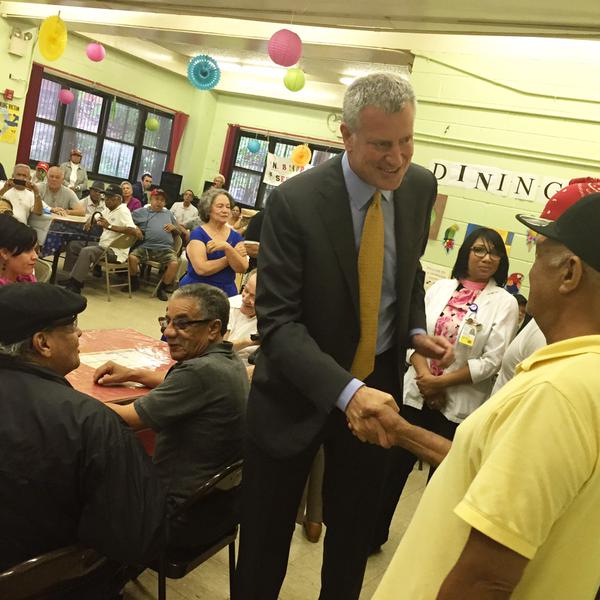 Today marks the 25th anniversary of the International Day of Older Persons, established by the United Nations General Assembly to both raise awareness of issues affecting older people and commemorate the contributions that they have made to society.

Here in New York City, there's a lot to appreciate.

Older people have helped make New York City the incredible place it is today. They built our infrastructure, led social justice movements, made major advances in health care and technology, and fueled our thriving economy.

Mayor Bill de Blasio's platform for social justice and equity, including plans for improving pedestrian safety, increasing the affordable housing stock, facilitating access to the Internet, and renovating the city's parks, has the potential to improve older people's quality of life if they are effectively consulted and considered.
The mayor's recent reconstitution and convening of the Age-friendly NYC Commission to identify and address areas where additional work is needed across the public and private sectors is another step in the right direction. Age-friendly NYC is a one-of-a-kind public-private partnership between the Mayor's Office, the New York City Council, and The New York Academy of Medicine, of which NYAM and AARP are commission members.

About 1.4 million of New York City's 8.4 million residents are 60 or older. That's one in six people. By 2030, this population will grow to one in every five, and older people will outnumber school-aged children. This will be one of the most diverse groups of older people in the world (over half of all older New Yorkers were born outside of the United States).

Healthy, active, and engaged older people are assets to city life. They work, loyally support local businesses, care for spouses and grandchildren, and give back through high rates of volunteerism. The city, in turn, has a great deal to offer older residents, as it does for people of all ages: vibrant neighborhoods, great public transportation, walkability, shopping and commerce, rich cultural institutions, and high-quality health care and social services.

Yet, New York City can be a challenging place for older people to live. Expenses are high, and the poverty rate among older people is nearly 20 percent — significantly higher than the national average. Finding affordable and accessible housing is difficult, with two in every three people over 70 paying more than 30 percent of their income in rent. In many neighborhoods, older people restrict their activities because of crime and safety concerns, as well as difficulty getting around. This can lead to social isolation which is associated with poor health.

In fact, a recent AARP survey of New York City voters shows even more concern about affording rent and mortgage payments among the up-and-coming older New Yorkers – Generation X (64%) – than among Baby Boomers (59%), with even higher numbers of African-American (74%) and Hispanic (70%) Gen Xers and Baby Boomers concerned. And a majority of both generations also worries about being able to pay utility bills, with African-Americans' and Hispanics' concerns again higher.

A separate AARP survey of New York City adults 50 and older found that 90 percent want to stay in their homes as they age and 73 percent say promoting age-friendly living should be a top or high priority for elected officials. Sometimes simple low- or no-cost solutions, such as the strategic placement of a bench or the use of school buses to transport older people to grocery stores during school hours, can make older people's lives easier, fuller, and more satisfying. Age-friendly NYC is dedicated to doing just that — creating a New York City where people of all ages can live, work, and thrive.

Since its inception in 2008, some of the improvements made by Age-friendly NYC include a reduction in senior pedestrian fatalities, increased walkability through the addition of public seating, new programming for older people at parks, educational and cultural institutions, and a better consumer experience offered by many local businesses. We've also worked closely with architects, urban planners, librarians, small business owners, and lawyers, just to name a few, to raise awareness of age-related issues within their respective fields.

We are making great progress, but there is still much work to be done to protect the rights and meet the needs of older people, who often report feeling left out or experiencing age discrimination where they live and work. If we are lucky, we will all be old one day, and we will want to continue enjoying everything we've always loved about our city — exercising in the park, shopping at favorite stores, going to concerts, museums, and theaters, and socializing with family and friends. Today, on the International Day of Older Persons, let's recognize the strength of older people and commit to making New York City a place where people of all ages feel included and valued.

***
by Lindsay Goldman and Beth Finkel

*note: this column has been updated from its original version to include more information from recent surveys