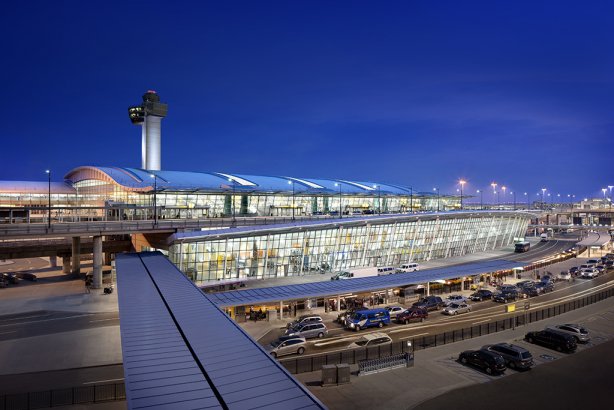 With the strong encouragement of Governor Andrew Cuomo, the Port Authority of New York and New Jersey is now hosting an international design competition to create a new master plan for JFK Airport. This plan will guide improvements for JFK runways, terminals, cargo needs, public transportation access, and other infrastructure. Rather than allowing the governor's office and airport officials to make decisions behind closed doors, the public needs to nudge the Port Authority to develop the airport's master plan via open discussions, increasing the likelihood that the planning will benefit the environment and the general public.

Based on how the Cuomo administration has been able to expedite the replacement of the Tappan Zee Bridge and the redesign of LaGuardia Airport, here is what to expect if there is no public process. First, Cuomo announces a project and a competition. Then, the designated government agency issues a Request for Proposals. The governor's office and the agency subsequently select a winner, promise financing, and closely manage any required public participation, political resistance, and permit reviews. The planning concludes with the agency selecting a single contractor to both design and build the project.

This top-down process might not be the best way, however, to create projects that resolve longstanding issues often at the base of the pressure for new infrastructure. The new Tappan Zee Bridge, for instance, is finally under construction, but it will not address long-term transportation or environmental issues in the region. Building quickly, often at great cost, isn't the only way to create first class infrastructure.

Here are five suggestions that may or may not be under consideration by the Port Authority, but would significantly upgrade the airport and New York's economy in the long term:

1. Subsidize the AirTrain. The AirTrain, which currently carries more than 45,000 people per day, can be even more successful. It really doesn't make much sense that travelers ride the AirTrain for free between terminals and park-and-ride lots, pay $5 for a short AirTrain ride to the Howard Beach or Jamaica subway stations, and then only pay $2.75 for a much longer subway ride (A, J, Z, or E) to Manhattan and other city destinations.

Since we are not likely to get a "one seat" ride to from the airport to Manhattan (or anywhere else in the city) in the foreseeable future, reducing the $5 fare would be a game changer for many travelers, especially for the airport's 37,000 employees, many of whom currently drive or take a slow bus. The Port Authority could add surcharges for taxis, Uber, and other ridesharing services that would generate revenue to lower the $5 fee and also help alleviate congestion and pollution on the Van Wyck Expressway, the main highway used to carry goods and people to and from JFK Airport.

2. JFK/Jamaica Bay Partnership. The Jamaica Bay portion of the Gateway National Recreation Area and JFK Airport have stood in tension for decades. The recreation area was created in large measure to protect Jamaica Bay from JFK expansion and pollution. Yet the plans to protect the recreation area were made in an era of robust government park budgets and without any sensitivity to climate change. As it is, Jamaica Bay has yet to achieve its promise as envisioned by either Robert Moses (who created the original parks there) or the National Park Service, which protects and operates Gateway.

The bay is still a prime habitat for migratory birds and other wildlife, but the bay's salt marshes are washing away. Of the 16,000 acres of marsh that existed in the 1800s, according to The New York Times, less than 1,000 acres exist today. Some of the loss is due to filling in of marshes for JFK and other surrounding urban activities, but more contemporary losses are usually blamed on water pollution, wave action, and rising sea levels. Loss of marshes not only reduces habitat space; the open waters make the surrounding neighborhoods and the airport more vulnerable to flooding.

The city has done its part to upgrade water quality and close landfills. The Port Authority, under regulatory pressure, has remediated underground oil pollution, prevented new leakage, and implemented procedures to reduce pollution from ongoing airport activities such as de-icing planes and runways. The same comprehensive approach to challenges is not found at the National Park Service, which has failed to respond to the tens of thousands of acres of wetland loss in any substantive matter. With higher priorities out west and elsewhere, and tight budgets, we can't expect much more from the federal government.

The Port Authority has resources for the massive action necessary to restore marshlands and further improve water quality. In exchange for Port Authority funds for marsh restoration, the authority should be able to study, and eventually build, moderate runway extensions along the edge of Jamaica Bay that would boost capacity and reduce delays.

3. Green the Airport. Air travel is one of the major global contributors to climate change. For many non-driving New Yorkers, flying is the largest part of their annual carbon footprint. The Port Authority's master plan for JFK Airport should include a program on site that will reduce the airport's energy footprint dramatically.

Solar panels could be installed over the parking fields that would reduce ground temperature and generate energy for operations. Solar panels or green roofs could also be installed on the roofs of the terminals, hangars, and other buildings. "Greenwalls" (plants mounted on vertical wall frames) could be attached to the large (and frankly, ugly) walls of parking garages, making for a more attractive landscape. These greenwalls also absorb sound, filter air, and reduce temperatures around them. An aggressive rainwater collection and landscaping program could further reduce pollutants draining into the bay.

Greening JFK airport not only provides local economic and environmental benefits, but as the metropolitan area's gateway to the world, a green airport would symbolize New York's commitment to protecting the planet.

4. Super Silent Planes and Noise Mitigation. JFK Airport will not be able to take full advantage of the Federal Aviation Administration's new air control system unless the Port Authority becomes a national leader in aircraft noise control. Thanks to new satellite technology, the new NEXTGEN air control system will allow planes to fly closer to each other both horizontally and vertically. But, neighborhoods near JFK Airport are already in revolt over the prospect of even more plane noise.

Decades past, the Port Authority was a major force behind quieter jets, controls on the supersonic Concorde plane, and retiring old aircraft. Indeed, thanks in part to the Port Authority, modern jets are much quieter than earlier versions. The third generation Boeing 747-8, for instance, is 30 percent quieter during takeoff and landing than the older Boeing 747-400; even though the new plane is longer, wider, and taller. But we only get those noise reduction benefits if airlines buy and use those planes, and not all airlines do. The Port Authority needs to encourage the airlines operating in New York to use only the quietest planes available.

The Port Authority needs to send a strong message to airlines and aircraft manufacturers that they need to accelerate the jump to even quieter planes. The authority has leverage since it operates three airports that rank in the top twenty of America's busiest airports. The planning for these new planes is happening now, but because of the long period between design and implementation, the realization of these super quiet planes will take years, and perhaps decades. New Yorkers can't wait that long, and neither can the Port Authority.

5. Parkway Cargo Vehicles of the Future. JFK suffers from having only one all-highway truck route to its air cargo areas—forcing all trucks onto either the Van Wyck Expressway or neighborhood streets. Congestion on the Van Wyck and the Long Island Expressway (the only other east-west highway on Long Island for trucks) has hurt JFK's once dominant cargo business. Trucks on neighborhood streets undermine quality of life in many surrounding neighborhoods.

Why does New York have such a strange system of roadways? Robert Moses created lovely green parkways such as the Grand Central, Belt Parkway, and Southern State that are still mostly truck free. And neighborhoods along those roads aren't likely to welcome any additional commercial traffic. The decision earlier this year to allow 53-foot trucks on city expressways, and the reconstruction of the interchange at Kew Gardens, will benefit business and overall traffic flow, but this change isn't enough to get shippers to rethink the extra cost of doing business at JFK or on Long Island.

As the City of New York did with its Taxi of Tomorrow, the Port Authority should sponsor a contest by truck manufacturers to design a vehicle that meets the height restrictions of parkway overpasses, has sufficient cargo storage capacity, runs quietly (perhaps a hybrid or natural gas) and is aesthetically pleasing. These distinctive, and perhaps futuristic, New York parkway cargo vehicles could help boost JFK's declining air cargo business—a key to the region's future.

Since there are many routes to creating a world class airport, the Port Authority should engage the public by describing possibilities, explaining the constraints, and helping to develop creative ideas.