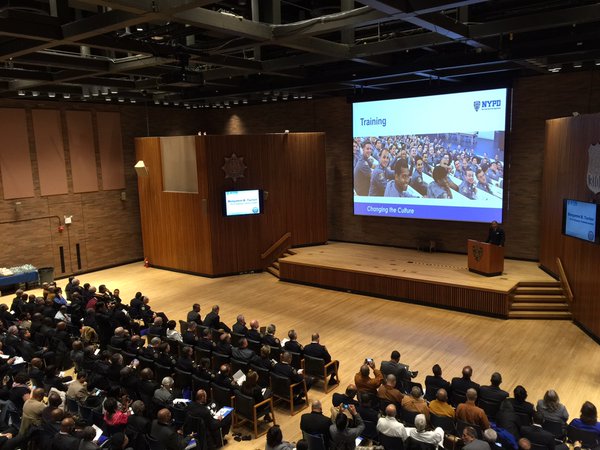 How do we respond to people in our society who might appear threatening, but who most urgently need medical help? Shortcomings in our community health and social services systems mean that many people who live in poverty, use drugs, and live with mental illness end up in our justice system.

In too many cases, a police officer’s response to someone experiencing a psychotic break or self-medicating with drugs involves an arrest, which can lead these medically-vulnerable people into a cycle of arrest and incarceration. Many of the issues that both public health and law enforcement agencies address in the communities they serve are rooted in health inequities, violence, trauma, racism, and poverty—problems that are often exacerbated by a stay in jail.

Of course, police officers should not be responsible for identifying social and medical needs in their communities, but they often serve as de facto street-corner psychiatrists and social workers for the people they encounter.

This is because they are called to respond to low level infractions that stem from people’s behavioral health needs. For instance, of all drug-related arrests in 2013, 83 percent were for possession of a controlled substance. Nearly 10 percent of all police interactions involve people with a mental health disorder—an interaction that too often leads to injuries and fatalities. In fact, it’s been estimated that more than 70 percent of people with mental health disorders in the justice system also have a substance use disorder. Currently, police lack alternatives to arrest for responding to these problems—officers report that they are more likely to arrest somebody displaying signs of a behavioral health disorder if they believe jail is the only option to provide basic medical services for that individual.

As gatekeepers between the community and the criminal justice system, police need to have the tools to appropriately respond to people who need treatment or services that do not require arrest, especially considering the long-term, steep collateral costs of justice involvement on individuals, communities, and taxpayers that include housing instability, underemployment, and reduced economic mobility.

Harm reduction and health promotion, two bedrock principles of the modern public health field, can serve as guiding approaches for police looking to minimize the negative impacts that too many low-level arrests have had on our communities—especially those of color. Though these burdens arise from the failures of current community health, justice, and social services, police officers can and should be an asset to public health work.

In contrast to abstinence-based interventions, harm reduction is a set of practical strategies that aim to minimize the negative impacts of drug use and other high-risk behaviors, even when people are not ready or able to give up these behaviors. And health promotion is designed to help people increase control over, and improve, their health.

Jurisdictions around the world have demonstrated that police who are able to incorporate a public health approach can not only reduce arrests of these medically-vulnerable groups, but also improve the health of communities.

Harm reduction-based interventions that deliver vital services to people engaged in drug use or sex work, such as condom distribution programs, overdose prevention training, or syringe exchange sites, can reduce the spread of infectious disease and prevent overdose deaths. And programs that incorporate health promotion principles, like Crisis Intervention Teams (CITs)—which consist of specially trained teams of officers who answer emergency calls where mental illness might be an issue—can leverage police training to equip officers to implement a safer response to people in psychiatric crises.

To ensure that vulnerable people are not driven underground and away from the services that benefit them and improve the health of communities, police should work with existing syringe exchange programs and local harm reduction advocates when possible to build trust and develop collaborative policies. Several harm reduction programs in New York City—like those of BOOM!Health, VOCAL-New York, and Washington Heights CORNER Project—have successfully worked with law enforcement agencies to develop policies and practices that don’t target people who utilize their services and that actively improve the safety of these clients as well as that of their communities.

Law enforcement agencies have also had success by reaching out to advocacy groups to increase their officers’ knowledge about harm reduction. The Harm Reduction Coalition has worked with police around New York State in a collaboration that resulted in the NYPD adopting their training manual. In the first year of this partnership, more than 5,000 officers were trained in using Naloxone, a life-saving antidote that prevents death when administered to somebody overdosing on opiates.

However, long-term impacts won’t be fully realized without an alignment of not only practices, but also metrics and incentives. Any review of police officers’ performance should include the number of their referrals to locally available community health and social services, metrics that reflect community perception and satisfaction with police encounters, and the number of lives saved through overdose prevention.

Arrests averted, rather than arrests made, should be a core guiding principle for police.

Additionally, health agencies, interventions, and professionals need to consider arrest and incarceration metrics of success for their programs in addition to more straightforward health outcomes.

Accessing public health services for people with substance use and mental health disorders should not require an interaction with law enforcement or a jail stay. Until alternatives are provided, police can draw on harm reduction and health promotion principles to most effectively ensure public safety for everyone, especially those who are most vulnerable.

***
Chelsea Davis is a Research Analyst in the Substance Use and Mental Health Program at the Vera Institute of Justice, and is co-author of its recent report, First Do No Harm: Advancing Public Health in Policing Practices.