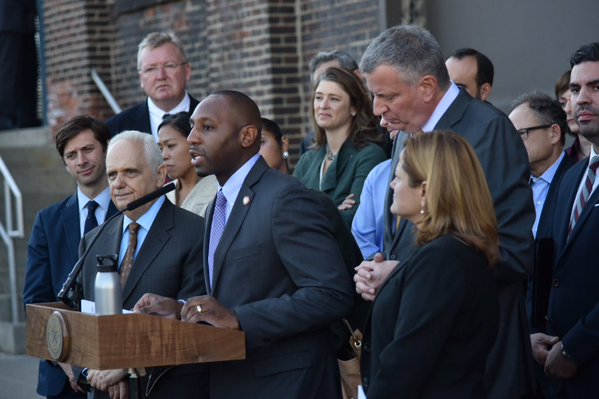 As the de Blasio administration pushes forward its Mandatory Inclusionary Housing (MIH) and Zoning for Quality and Affordability (ZQA) plans coupled together, the City Council plans to take the time to look at these two proposals separately. As chair of the Land Use Subcommittee on Zoning and Franchises, my committee has significant responsibility in this process. One thing is clear: a one-size-fits-all approach will not work.

Community Boards across the city have voiced their concerns about these two plans and we must let them know that we are listening. There are a variety of valid concerns.

As the proposals make their way to the City Council in early 2016, the administration needs to factor in community feedback and make appropriate changes to ensure that the voices of residents are not ignored. We must make sure we are not weakening existing zoning laws or the very process that allows residents to fight to protect the character of their neighborhoods.

After speaking with my colleagues, and as Speaker Melissa Mark-Viverito has said, the Zoning for Quality and Affordability plan will not pass muster in the City Council without changes.

One glaring issue of concern to me that should be removed is the as-of-right policy. We should not be eliminating the need for special permits to build nursing homes and healthcare facilities - doing so would push the city in the wrong direction. The construction of these buildings should have more oversight, not less, and the reason for the current process is to prevent the oversaturation of particular areas that are doing more than their fair share.

Currently, the permit process goes through the Department of City Planning. Developers should have to go through a Uniform Land Use Review Procedure (ULURP). Oversight is essential and communities need to be involved in any planning process that will affect their neighborhood.

While we share the goal of providing housing faster, we must not sacrifice the oversight process in doing so.

As-of-right would also give landowners the ability to remove already existing parking spaces without any due process, which is simply unacceptable to seniors who may come home to find out they are losing the parking spot they rely on.

The goal of reducing parking mandates in areas that the administration has deemed transit hubs is a serious concern, especially in my home borough of Queens, where transit options are limited. Many Queens residents are reliant on their cars and the ability to find parking.

These zones where people have somewhat better access to public transit and there is a focus on decreasing parking need a closer look - it is imperative that city agencies explain how they are going to invest in the infrastructure to account for denser populations. With the city's recent $2.5 billion investment in the MTA capital budget, plans to improve access in these areas need to be included. Simply living near mass transportation does not mean that the infrastructure is at the level it should be to make it a viable option.

We also need assurances that the allowance of a height increase on ground floors will be used for commercial purposes and developers will not be able to turn it into residential space. I would also like to see strategies from the city Economic Development Corporation and the Department of Small Business Services that will ensure the commercial space is used to stimulate economic development in our communities.

While these plans would have an effect on all New Yorkers, Zoning for Quality and Affordability (ZQA) will also have a major impact on seniors in neighborhoods across the city, whether in nursing homes or senior housing developments. The administration must show us that senior housing will contain quality apartments that are not unreasonably small. Seniors are the fabric of our communities and built the groundwork for everything we have today, so we should ensure that we are not limiting their ability to be active.

Due to the complexities of both MIH and ZQA, I am calling for two separate hearings since these plans each deserve their own time in front of the City Council before any final proposal is brought to chambers.

I commend the Department of City Planning for all its work to develop with these proposals and for traveling to communities across the city, and I give Mayor de Blasio and his administration credit for making the affordable housing crisis a priority. But, it is imperative that the final plan for zoning text amendments is the best it can be for all communities. In a city as large and diverse as New York, one size does not fit all.

[Related: Next Steps for The Mayor's Zoning Proposals]

***
City Council Member Donovan Richards, chair of the Land Use Subcommittee on Zoning and Franchises, represents District 31 in Queens, which includes Laurelton, Rosedale, Springfield Gardens and Far Rockaway. He is on Twitter @DRichards13.