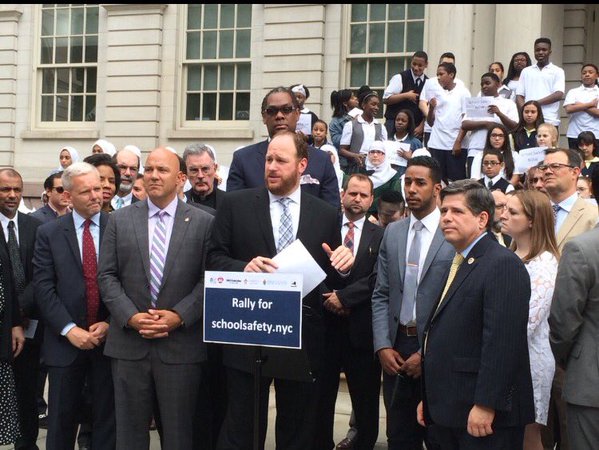 Earlier this week the City Council, with the blessing of the mayor, passed Intro 65, a bill that will give $19.8 million of public money to Yeshivas, Catholic, and private schools to pay for security guards. In defending the legislation and public money for private school security as an appropriate use of city funds, Council Member David Greenfield explained that the city is "flush with cash."

His statement about the city being flush with cash is insulting; especially when you look at the district he represents. Mr. Greenfield's district includes part of Borough Park, where the poverty rate is about 32 percent, the same as East New York. Does he think that his constituents feel "flush with cash"?

The City Council, including Mr. Greenfield, are ignoring the realities of the communities they serve and the City as a whole when they pour cash into private institutions and ignore the dire needs of public schools that depend on public funds. Schools throughout the city go without vital resources every day. Yet over and over again, they are told to do more and more with less.

What could nearly $20 million from the City Council do for our public schools? It could be used to add instructional time and expand the school day for dozens of schools struggling to raise student achievement. It could be used to provide social and emotional support services for students and families through community schools, of which there is only one in Greenfield's district, or to provide college counselors in high school, helping to ensure that students apply to and are accepted to schools that best fit them.

Those funds could also be used to spread research-based models of parent engagement throughout the city, to grow the skills and capacity of families to assist in the academic improvement of their children. The funds could be used for translation services for schools like IS 96 in Mr. Greenfield's district, where families speak dozens of languages and struggle to engage in their children's education.

How many students sit in front of outdated computers or go without a library in their schools? If the city is "flush with cash," why are students across New York sitting in schools that are under-resourced and understaffed? The $20 million in public money that will now go to private schools would have been much better spent on schools that are open to all children: public schools.