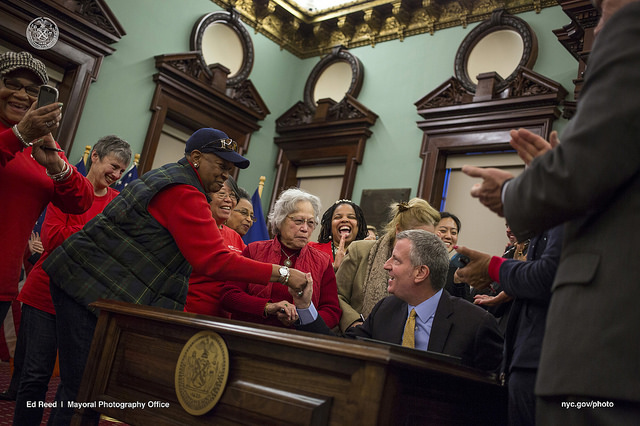 Paid parental leave is a hallmark of civilized societies that financially support family values. It is laudable that the City of New York wishes to be included in those ranks, starting by mandating paid parental leave for city managerial employees. But the de Blasio administration does so by having those employees pay for it themselves with a reduction in their next scheduled pay increase and the loss of two vacation days for some. That's hardly an act of a progressive employer.

Many of the managerial employees being covered by the mayor's executive order are not high-salaried executives. Some are managers whose pay starts at $57,210 annually, which translates to $27.50 per hour. City managers with 20, even 30 years of service have passed a series of civil service tests that they must pay to take. Still, some are barely making a living wage.

Most are not policy makers, this work is done by elected officials and agency commissioners. Instead, the managers make sure that the service goals set by the policy makers are met. They are the policy implementers who keep our city running 24/7 no matter who the elected officials and their top-level appointees, who largely most over $200,000 per year.

An adult with one child making $27.40 per hour barely qualifies as making living wage according to the Living Wage Calculator for New York County designed by the Massachusetts Institute of Technology. The MIT calculator was used in determining that the minimum wage should be a living wage of $15 per hour. A $15 hourly minimum wage is strongly supported by the de Blasio administration, as evidenced by the mayor's recently announced plan to move all city employees to that minimum over the next couple of years.

De Blasio believes that all those in the private sector, like entry-level fast food workers, should soon make a minimum of $15 per hour too.

Shouldn't the minimum be something more for managers who oversee the spending of millions of tax dollars for vital city services? After years of service, shouldn't those managers be well above $27.40 per hour? And, when we rightfully seek to expand family leave benefits to those managers, shouldn't they not have to sacrifice pay increases?

Cheating city managers out of a full pay increase to pay for a progressive policy like paid family leave challenges the credibility of the city's true commitment to the new parental leave policy. Back in Jamaica, Queens where I grew up it is called "putting your money where your mouth is," which is what I want to see the City do on paid family leave.

The current scheme forces managers to buy their own paid family leave and therefore reduces its impact. Paid family leave is a progressive policy - making employees pay for it is not.

***
Arthur Cheliotes is President of CWA Local 1180, a municipal union representing more than 8,500 workers and 6,200 retirees. Most work in one of dozens of New York City mayoral agencies; others at the Department of Education, Health and Hospitals Corporation, NYCHA, the Transit Authority, the School Construction Authority, and the state's Unified Court System.