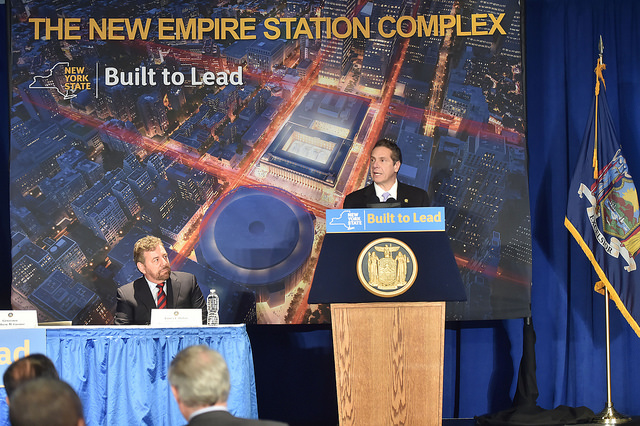 Governor Cuomo deserves credit for jumpstarting the Moynihan Station project this week, albeit under a different moniker. After decades of neglect, commuters and long-distance travelers deserve light, air, and dignity.

But Cuomo's plan neglects the deeper problems that have long plagued Penn Station.

And worst of all, three different railroads clogged the same number of tracks.

Crowds, delays, and frustration become the norm. And after Superstorm Sandy decimated Penn's tunnels, the three railroads bickered and dithered as riders suffered.

Even with a reinvented station complex overhead, the Long Island Rail Road, New Jersey Transit, and Amtrak will still share the mostly same tracks, cramped platforms, and underwater tunnels. It's unlikely that decades of dysfunction will disappear after the ribbons are cut.

And with ridership climbing and Sandy repairs looming, the trio can barely keep up with the status quo — let alone support the expansion that the economy demands.

Cooperation would help resolve these problems. Running commuter trains between Long Island and New Jersey — rather than terminating them at Penn — could double capacity while opening up jobs to those on both sides of Manhattan. Coordinated communications and ticketing could ease crowding and nerves. And other options, such as sharing services, would slow the rate of fare increases for riders of all stripes.

To truly fix Penn Station, Cuomo must look beyond the building. Cooperation among the railroads is the missing ingredient in the governor's plan.

***
Adrian Untermyer is Deputy Director of the Historic Districts Council and was named an Emerging Leader in Transportation by the NYU Rudin Center. On Twitter @untermyer.