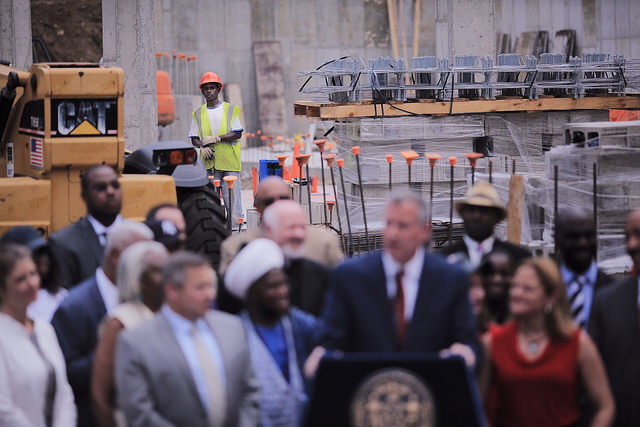 In November, New York City Mayor Bill de Blasio and City Council Speaker Melissa Mark-Viverito released a manufacturing policy that makes a strong commitment to the city’s Industrial Business Zones (IBZs). This is the culmination of a growing consensus among certain sectors of the city, from the Progressive Caucus of the City Council to the Hotel Trades Council the editorial board of Crain’s NY Business.

The ten-point plan includes investments in city-owned manufacturing facilities such as the Navy Yard, the creation of a shared advanced manufacturing incubation space, and, controversially, strengthening the prohibition of residential uses within IBZs. Naturally, however, some developers and real estate investors are skeptical, according to Politico New York:

"Several developers…were predictably troubled by the idea that they could not build apartments and condos in these zones … “There are areas of the city that manufacturing is never going to return to. With the housing crisis being what it is, it doesn’t make sense to preserve them for jobs that aren’t coming,” said one developer."

Steve Cuozzo at the Post goes farther, calling it “delusional:”

"What’s looney is the misallocated priority. While the city moves at a snail’s pace to rezone East Midtown, chief engine of the city’s tax base, and buries shopkeepers and small businesses under an avalanche of fines and regulations, it’s throwing the kitchen sink into massaging a sector that counts for peanuts in relation to a financial-, media- and service-driven economy."

As outlined by Saskia Sassen in The Global City, New York’s economy today, like most global cities, is built on producer services like finance, law, and marketing, which make New York into a command-and-control center for the global economy. When Cuozzo tells us to focus on rezoning East Midtown and the “financial- media- and service-driven economy” that operates there, he is arguing that New York should further specialize in producer services, on the assumption that they can sustain the city’s economy and finances indefinitely.

It’s natural to ask, why not? Why make space for manufacturing, when other sectors are contributing so much to the region’s economy, and with affordable housing in such short supply?

For one, cities need manufacturing. Urban production is a self-sustaining engine of prosperity. Not large-scale industrial monocultures like the Detroit auto industry in the “big three” era, but a large variety of small manufacturers buying and selling to one another, like New York’s economy was built on.

As Jane Jacobs argues in The Economy of Cities and Cities and the Wealth of Nations, with support from many economists, cities grow and thrive when small enterprises start producing things they previously imported from other cities, creating new markets for suppliers, maintenance, and distributors, while creating knowledge spillovers that lead to new innovation. The cycle continues as the new imports are replaced in turn. This cycle, she argues, is the very process of economic development.

Jacobs even went so far as to criticize Mayor Bloomberg’s rezoning of Greenpoint and Williamsburg in the last year of her long life, in part because it robbed the neighborhood of manufacturing land. Even Bloomberg recognized the importance of production, since his administration created the IBZs and, with great success, redeveloped the Brooklyn Navy Yard as a productive manufacturing space.

Producer services may result in high profits, but the majority of working-class jobs they create are precarious, low-wage service jobs. Without manufacturing jobs to fill the gap, workers can’t keep up with the rising rents and fares on the paltry wages they make mopping floors and mixing lattes. Fighting back against that inequality, whether through struggles for a $15 minimum wage, against racist police violence, and to preserve and expand affordable housing are crucial. So is building a stronger, more sustainable economic base for working-class New Yorkers.

To create that base, the city must reserve space for job-creating production to occur. Forget the market balancing supply and demand: in such a hot market, there is more demand for various land uses than the city will ever have the square footage to supply. Without public action, only the highest-margin uses will win out, so reserving space for manufacturing, just as it does for affordable housing, is exactly what the city should be doing. Affordable housing, public services, and manufacturing all contribute to the needs, prosperity and culture of the city, but if they are caught in a bidding war with finance and high-end real estate, they will lose. The city isn’t just a space to consume, it’s a place to produce.

***
Matthew Rigney is a Master of City and Regional Planning Candidate at Rutgers University.