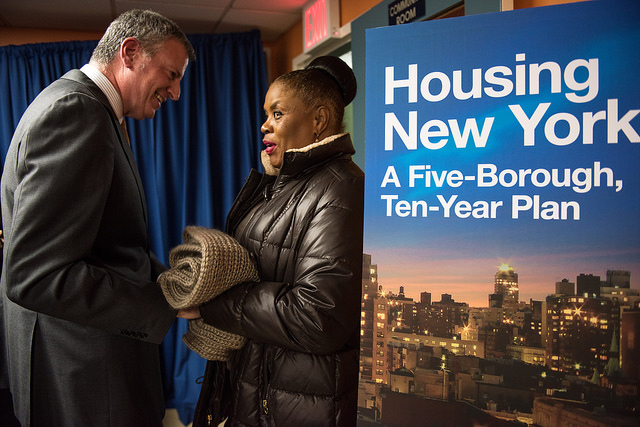 When I think about my family's future in New York City, I wonder: will there be an affordable, safe, and healthy apartment where I can raise my children and still be able to provide them with everything else that they need?

This is the question that our city government has to address if it wants to protect low-income and working class New Yorkers.

My husband and I live in Bushwick in a one-bedroom apartment with our three children—one of whom has special needs—and my sister. We pay more than $1,200 per month—more than half of our income, which comes from my husband's job in a fruit and vegetable store. For the last two years, we've been looking to find somewhere better—somewhere more affordable, with more space for our children. Our landlord wants us out, too, because he wants to renovate and charge new tenants more as Bushwick gentrifies.

But there's nowhere for us to go. Even studios near where we live are now renting for $1,400-$1,500—too much money, and too little space, for our family of six.

In recent weeks, the city has heard much debate on how to create and preserve affordable housing. The most talked-about item has been the Mayor's Mandatory Inclusionary Housing (MIH) plan, which would exchange zoning changes to allow more housing construction for, in most neighborhoods, the requirement that 25–30 percent of apartments be affordable to people earning 60 to 80 percent of Area Median Income (AMI).

The problem with the plan is that it won't solve the problem for working class New Yorkers like me.

Sixty percent of Area Median Income is almost $47,000 for a family of three, and many New Yorkers are far from earning that. My family of six earns about half that much.

As a recent Real Affordability for All (RAFA) report found, in many of the neighborhoods that are being rezoned—like East New York, the South Bronx, and East Harlem—the average income is far below 60 percent of Area Median Income. So, when I look at the MIH plan, I wonder: "affordable" housing for whom? Certainly not for local residents like me.

Mayor de Blasio stood on the right side with our communities in the Fight for $15, to raise the minimum wage to $15 per hour for the 3.2 million low-wage workers in our state who currently earn less. But the reality is that, even once our families win the $15 per hour that we so desperately need, the vast majority of the housing being proposed in the MIH plan will not be affordable to us.

We ask the Mayor to reconsider his plan and expand affordability to preserve and build genuinely affordable housing.

***
Susana Salas is a member of Make the Road New York, the largest grassroots community organization in New York offering services and organizing the immigrant community. On Twitter: @maketheroadny.