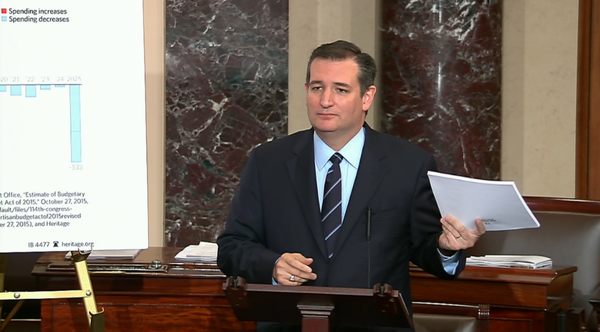 Stereotyping New York in political debate
In a Republican presidential debate in January, Senator Ted Cruz tried to score points, saying of Donald Trump, "Donald comes from New York and he represents New York values." Cruz went on to say that "everyone in the country knows exactly what New York values are and I've got to say they're not Iowa values or New Hampshire values." New Yorkers are "socially liberal and pro-abortion and pro-gay marriage and focus on money and the media," he said.

Cruz repeated the message, with variations, in his campaigns in Iowa and New Hampshire.

Senator Cruz was using an old political gambit, playing on stereotypes of New York (particularly New York City) as excessively liberal, corrupt, money-grubbing, and out of step with the rest of America.
New Yorkers get their backs up when their city or state is stigmatized or attacked.

After the January debate, Governor Andrew Cuomo retorted that Senator Cruz "doesn't know what New York values are because New York is in many ways the epitome of what formed this nation and what keeps it strong....We do believe in E Pluribus Unum, out of many come one, and his rhetoric is the exact opposite." Several other prominent New Yorkers weighed in, including Donald Trump, who suggested that New York's heroic response to 9/11 revealed its deepest values.

Cruz's comments provoked many other New Yorkers to express their opinions (mostly positive) about their city. The New York Times asked a cross-section of city residents their opinion on what constituted "New York values" a few days after Cruz's attack. Their responses: New Yorkers are diverse, friendly, ambitious, curious, tolerant, competitive, impatient, hustling and determined -- "we keep our heads high, no matter what."

A New York Daily News front page on January 15 put it more directly with a headline of "DROP DEAD, TED."

New Yorkers have seen it before
Cruz is certainly not the first politician to try to cast New York as a place of wanton ways with values at odds with those of the rest of the nation.

Republican attacks on New York Governor Al Smith when he ran unsuccessfully for president in 1928 focused on his Catholic religion, opposition to prohibition, and subservience to the New York City Democratic organization Tammany Hall, all allegedly emblematic of his hometown, New York City. Smith's campaign theme song, "The Sidewalks of New York," and his "New York accent" in campaign speeches confirmed how ingrained New York City's culture and folkways were.

In 1960, conservative Republican Senator Barry Goldwater expressed a wish that "we could tell New York to kiss our [expletive] and we could really start a conservative party." In 1963, he suggested the nation would be better off if the east coast could be sawed off and floated out to sea. But everyone understood that New York, with its liberal politics, cultural influence and economic power, was his main bugaboo.

The next year, Goldwater won the Republican presidential nomination over New York Governor Nelson Rockefeller, whom Goldwater labeled a liberal New York spendthrift. His supporters sniped that Rockefeller was immoral for having divorced his first wife and remarried, something they vaguely insinuated had to do with loose New York morals.

Historical views of "New York values"
Fending off attacks is easier than defining precisely what New York's values are. That's no surprise, given New York's long history, complexity, and our proclivity for vigorous debate among ourselves.

In 1939, Mayor Fiorello LaGuardia assailed critics who asserted that his city was "a money mart...a synonym for Wall Street...New Yorkers are impolite." New York is "a warm-hearted and generous community," he insisted. But with a touch of that New York pride bordering on arrogance that can irritate outsiders, the mayor added that his city was so far superior to others that "we could afford to stop for the next twenty years and we would still be slightly ahead of the procession."

Historian Milton Klein wrote in 1978 that New Yorkers could be thought of as "cosmopolitan Americans: energetic...materialistic and brash but also convivial, humane, tolerant and idealistic. That one state alone should be able to encompass in itself so many of the virtues and limitations of the American people is a measure of New York's unique role in the nation's history."

Mayor Michael Bloomberg, in a statement to the 9/11 Commission in 2003, eloquently described his city's cosmopolitan pre-eminence:

To people around the world, New York City embodies what makes this nation great. That's a function of our status as the world's financial capital, driven not only by Wall Street but [also] our international prominence in such fields as broadcasting, the arts, entertainment and medicine. Such is New York's importance that to a great extent, as goes its economy, so goes the country's. If Wall Street is destroyed, Main Street will suffer. Beyond that, New York embraces the intellectual and religious freedom and cultural diversity that makes us truly the world's second home. We are a magnet for the talented and ambitious from every corner of the globe. In short, we embody the strengths of America's freedom.

Governor Mario Cuomo (1983-1995) saw enlightened, progressive public policies as New York's defining trait. He defined "the New York Idea" as "government using its resources to help create private sector growth, then requiring those who benefit from that growth to share some part of it so that hope and opportunity are extended to those who have not been as fortunate."

Andrew Cuomo, the current governor, emphasizes that New Yorkers are exceptionally energetic, innovative, determined, and resilient. "At every difficult moment in our nation's history, New York has emerged as...the progressive leader in the nation," he explained in his inaugural address in 2011. "In New York, we may have big problems, but we confront them with big solutions," he said in his State-of-the State message the next year. He often includes in his speeches a quotation from essayist E.B. White: "New York is to the nation what the white church spire is to the village, the visible symbol of aspiration and faith, the white plume saying the way is up."

One is openness, inclusion, and tolerance. Since colonial times when the Dutch controlled the city, the emphasis has been on diversity, valuing individual differences, letting people alone, and providing opportunity for work, advancement, and getting ahead.

New York has been open, welcoming, accommodating, and supportive of newcomers. Over time, more immigrants have come in through New York than any other city. Our city and state have been at the forefront of social justice campaigns and civil rights reforms. For instance, the NAACP was founded in New York City in 1909 and New York passed the nation's first state civil rights law, in 1945. New York City probably has the most diverse population of any major city in the world.

A second is optimism and resilience. New Yorkers are undeterred by setbacks, springing back from adversity and continuing forward progress. It dates back at least to the origins of the state. The Revolutionary New York provincial congress were rebels-on the run, moving from New York City to White Plains to Fishkill to Kingston ahead of advancing British troops. They finished hastily drafting New York's first state constitution in April 1777.

When the British threatened Kingston, the new government became a government-on-the run, simply dispersing, reassembling later at Poughkeepsie, and keeping the fledgling state intact. The first governor, George Clinton, calmly took the oath of office in August 1777 and then hurried off to lead a battle against the enemy where he barely escaped capture.

New Yorkers keep going and are known for against-the-odds triumphs. For instance, mockery and stonewalling by the power structure inspired New York's great women's rights advocate Elizabeth Cady Stanton on to more tenacious campaigning. Denied the right to vote, she defiantly ran for Congress from New York City in 1868, losing but making a point about women's political stature. Jackie Robinson was undeterred by racist taunts and threats and became the first black man to play professional baseball, with the Brooklyn Dodgers in 1947, and later an inspirational civil rights leader.

The New York City Fire Department mourned its dead after 9/11 and then got right back to work, creatively revising its mission, policies, and training to meet the new threat of terrorism.

New York City not only survived the attacks but came back more resilient and stronger than ever.

The debate over "New York values" is likely to continue
New York mirrors the nation in its complexity and resists tidy categorization. Its values are hard to pin down but its history is rightly a source of inspiration and pride, with tolerance and resilience at the core.

Activist, writer, and New York City First Lady, Chirlane McCray, refuted Ted Cruz by citing the city's steadfastness in challenging times."That fighting spirit, that gut instinct to join together in times of hardship, that refusal to leave behind the most vulnerable among us -- these are the values that have defined New Yorkers from the very beginning."

As the presidential campaign moves along, we can expect to hear more about "New York values." When we do, we need to keep historical insights and perspectives in mind.

***
Dr. Bruce W. Dearstyne lives in Guilderland, New York. He is the author of The Spirit of New York: Defining Events in the Empire State's History, published in 2015 by SUNY Press.