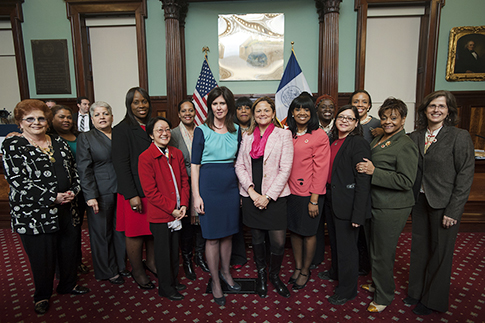 Significant progress has been made, but substantial discrepancies exist between women and men – most notably, a sizable wage gap. As of 2013, women still earned only 78 cents for every dollar earned by men, with a median income over 27 percent lower than that of men. For women of color, the pay gap widens: black and Hispanic women earn 64 and 56 cents on the dollar, respectively. Stretched over a lifetime of work, this leaves women with much less money than the average man.

At S&P Fortune 500 companies, women hold less than 5 percent of CEO positions and only 16 percent of board seats. When women are top earners, the pay gap tends to close at a faster pace. But disappointingly, the numbers show that women are vastly underrepresented in these higher-level positions, resulting in a persistent pay gap and lack of diversity in board rooms big and small.

Yet, women are more educated and prepared for the workforce than ever before. Women now account for nearly 60 percent of annual four-year university graduates, 60 percent of master’s degrees, and 52 percent of doctorates being awarded in the United States.

Though the longstanding pay gap is an undeniable social injustice; it amounts to much more, and is actually hurting corporate bottom lines.

Study after study, particularly those from Catalyst, the global expert on accelerating progress for women through workplace inclusion, has stated that when women hold leadership or board positions, it improves company financial performance, economic growth, productivity, and profitability. This makes it crystal clear that business is better and companies perform most effectively when they bring equal opportunity, allowing everyone a seat at the table.

The City of New York, as the global center of business and commerce, and proprietor of billions in private contracts, can play an important role in promoting the levels of diversity we need in the 21st century. Let’s make sure we get the best value for our own tax dollars, and promote businesses that promote equal opportunity.

Last week, the City Council voted and passed Introduction 704-A, a bill we sponsored to gather more information on the gender and racial makeup of the individuals who make up executive-level staff and boards of companies that do business with the City. Once signed into law, it will require the Department of Small Business Services to survey companies that do business with the City and obtain the demographics of companies’ executive-level staff and board members.

In 2015, the City procured $13.8 billion worth of goods and services through more than 60,000 transactions, yet we do not know who is running the companies that are conducting this business. Our new law will provide the City with the data it needs to ensure that city-contracted companies are promoting the diversity that makes this City so great, and could ultimately boost the economy.

It’s a small step that we believe will go a long way to help our City recognize inequities in our own front yard and create incentives for businesses throughout New York to promote diversity in their top ranks.

We hope you will all join us today in the fight for equal opportunity, equal pay, and a New York City where everyone can succeed.