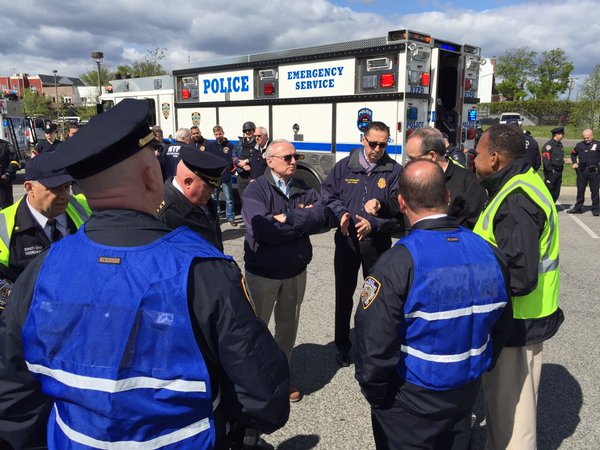 Commissioner Bratton and others (photo via @NYPDnews)

Last May, NYPD Commissioner Bill Bratton issued a 41-page report extolling the virtues of Broken Windows and quality-of-life policing, and promoted what he termed a “peace dividend” of “nearly a million fewer enforcement contacts like arrests, summonses, and reasonable-suspicion stops when compared to their respective highs.” He explained further in a letter to City Council Speaker Mark-Viverito: “there has been a drastic reduction in enforcement contacts between police and citizens, a benefit of lower crime that I call the Peace Dividend.” He clarified that the “dividend” is the “diminished need to use enforcement tools for every problem."

The use of the phrase “peace dividend” is telling and alarming. The term was frequently used at the end of the Cold War when many nations cut their military spending and money originally intended for the military became available for other purposes. No doubt while the Commissioner was fighting his war on crime, the police felt like an occupying army to black and Hispanic people living in neighborhoods that bore the brunt of a policy of massive arrests for trivial things.

While the commissioner’s notion of a dividend does not seem to correspond to additional government funds allotted to badly needed social programs in the affected communities, it does at least mean that more people in those same communities might be left in peace. On the other hand, Bratton’s pronouncement is redolent of an omnipotent overlord magnanimously bestowing a gift upon the residents of neighborhoods like South Jamaica, Brownsville, Mott Haven, and East Harlem, where rampant arrests and summonses have created immeasurable alienation, damage, and suffering.

Recently, in the course of another round-up of crime statistics, Commissioner Bratton noted that arrests were down by about 10 percent in April. In an effort to explain the drop, he said that the police were making fewer arrests for minor offenses and that “[w]e are trying to reduce the number of contacts we have with the public that [are] not necessary.”

On its face, continued evidence of the so-called peace dividend is laudable. Decreasing unnecessary police-citizen interactions is obviously a worthy goal. But upon closer inspection, the commissioner’s explanation is troubling and revealing.

Shouldn’t he try to eliminate, rather than reduce, unnecessary police-citizen contact? While the commissioner’s acknowledgement that some number of police-citizen contacts is unnecessary is notable for its candor, it is also disturbing for its veracity – it begs the questions of just how many unwarranted interactions there are and upon whom are they inflicted. Answering these questions is not easy, but is essential.

Former Mayor Michael Bloomberg and his police commissioner, Ray Kelly, repeatedly and defiantly argued that the ever-rising number of stops-and-frisks – that peaked at almost 700,000 in one year (2011) – were necessary for public safety. When a federal judge ruled that the stops were unconstitutional, Bloomberg excoriated the judge saying, "[T]his is a very dangerous decision made by a judge who I believe does not understand what good policing is."

To drive his point home, he observed that he was glad that the implementation would likely take place after the end of his term, saying, "I wouldn’t want to be responsible for a lot of people dying." Well, crime continues to decline even as the number of recorded stop-and-frisks has plummeted to a current estimate of 25,000-35,000 for 2016 (a drop of around 95 percent from the high), providing powerful evidence that hundreds of thousands of stops were unnecessary, as well as illegal.

In similar fashion, the 10 percent reduction in misdemeanor arrests has not corresponded to an uptick in crime, suggesting that perhaps the ‘peace dividend’ is being miserly applied. Why not 15 or even 25 percent? Why not try a pilot program in some precincts to see how far the dividend could go? The NYPD issues about 1,000 summonses each year for riding a bike on the sidewalk in East New York. What if the officers in that precinct were instructed not to issue any summonses for unlawful bike-riding for some period of time? If crime did not correspondingly increase, the same approach could be taken with similar low-level offenses in that and other precincts, and the number of unnecessary police contacts with the public could be further reduced.

The awareness of necessary versus unnecessary contacts even runs through the NYPD rank and file. Back in December 2014 and into early 2015, police officers engaged in a slowdown to express unhappiness with Mayor de Blasio’s handling of Eric Garner’s death at the hands of Police Officer Daniel Pantaleo and the killings of Police Officers Wenjian Liu and Rafael Ramos. An email, widely believed to be from the Patrolmen’s Benevolent Association, was circulated instructing officers to make arrests only when it was “absolutely necessary.” Arrest numbers dropped precipitously over the next few weeks leading to the recognition that the NYPD’s standard operating procedure included an awful lot of unnecessary arrests. Consider as well that the crime rate continued to drop even in the face of drastically reduced arrests, tickets and stops.

Hyper-aggressive policing tactics like stop-and-frisk and Broken Windows enforcement drove the number of unnecessary police contacts with the public into the millions. More specifically, it did indeed amount to a war waged in and upon communities of color. Commissioner Bratton’s peace dividend has a long way to go to rectify that reality.