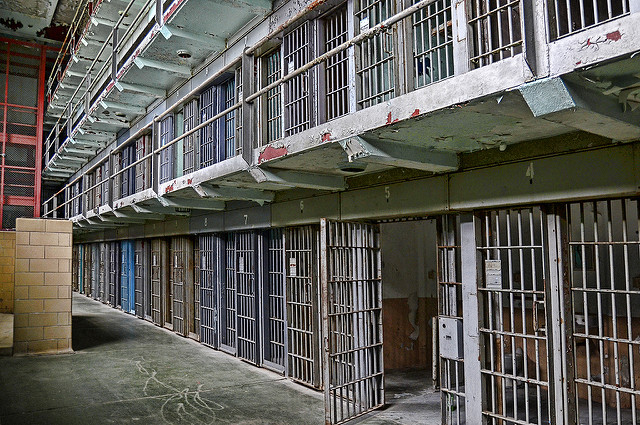 Earlier this month, I saw Mariposa & the Saint: From Solitary Confinement, A Play Through Letters. Actress and activist Julia Steele Allen plays Sara Foneseca, or Mariposa, as she is referred to in the play, and uses Mariposa’s own words to express her experiences in the Security Housing Unit (SHU) at a women’s prison in California. For the past ten years the two women have been corresponding through letters; the play is a collaboration that grew from this communication.

In one of the most disturbing parts of the play, Mariposa shares in a letter to Allen that a woman in the prison has committed suicide. Mariposa seems frantic and in shock at the calm response from the prison personnel. She exclaims there was no sense of urgency. It seems, she says, as if they were saying, “nothing to see here folks, just your average, run of the mill, scheduled suicide.” Mariposa tries to keep her spirits up although it is evident that she is slowly fading. At one point in the play she explains she refused to leave her cell -- even to shower -- for eight months.

The performance was followed by a workshop discussion on the issue of solitary confinement during which Regina, who was incarcerated in Albion Correctional Facility near Buffalo, New York, shared horror stories of her own experiences in “the box.” She noted that many of her peers were not even allowed to send or receive letters, practices considered privilege and meted out by the guards, despite being one of the only forms of human communication they had left.

There are 2.5 million people incarcerated today in the United States, and while it’s rare for the experiences of these people to be given a public viewing such as Mariposa provides, public demands to reform prison conditions and to end mass incarceration are growing. As are calls to end the torturous practice of solitary confinement.

Allen has brought “Mariposa & the Saint” on a national tour of eight states, including New York, which all have active campaigns and pending legislation to end or reform the conditions of solitary confinement. Humane Alternatives to Long Term (HALT) Solitary Confinement Act (A. 4401/S. 2659) is a piece of legislation that has yet to pass through the New York State Legislature, despite being introduced for years. This bill would create substantive alternatives to solitary confinement, place strict limitations on the use and permitted durations of confinement, and improve due process protections for people facing disciplinary infractions.

Last month, “Mariposa & the Saint” was performed for members of the state Legislature, hosted by the Women of Color Sub-Committee of the Black, Puerto Rican, Hispanic, & Asian Legislative caucus including Assemblymembers Maritza Davila and Latoya Joyner, along with Assemblymember Jeffrion L. Aubry, and state Senator Bill Perkins. Additionally, in early May, CAIC organized a lobby day which resulted in HALT now boasting more than 60 sponsors in the Assembly. Despite this support, the bill did not pass this year and remained in the Assembly’s Crime Victims, Crime and Correction committee until the end of the session. What was left out of the final Albany deals earlier this month was prison reform for thousands in solitary confinement, which has been denounced by Pope Francis, the United Nations Special Rapporteur, and President Obama.

The play was performed on Friday, June 10 at The New Settlement Community Campus in the Bronx, located in Assembly Speaker Carl Heastie’s home district in hopes of adding pressure to the Speaker so that he would use his authority to bring HALT to a vote before the session ended.

Solitary confinement is torture and can lead to devastating, lasting psychological consequences such as depression, alienation, suicide, and withdrawal. Solitary Watch estimates 80,000 to 100,000 incarcerated people are held in some form of isolated confinement at any time in the United States, most spending 23 or more hours a day in their cells. Dr. Terry Kupers told The New York Times, “many [formerly incarcerated individuals] still carried the psychological legacy of their confinement.”

New York State legislators did not act to reform the torture happening in their state prisons. Governor Cuomo, state legislators, and all New Yorkers must see and say that solitary is torture. It is time that we all demand reforms to end, or at least significantly limit, the use of solitary here in New York.

***
Jennie Encalada is a Brooklyn-based social worker and activist. On Twitter: @jenjeno07. Mariposa & the Saint completed it's 2015-2016 national tour this June, but has further plans. Learn more about the Campaign for Alternatives to Isolated Confinement (CAIC).