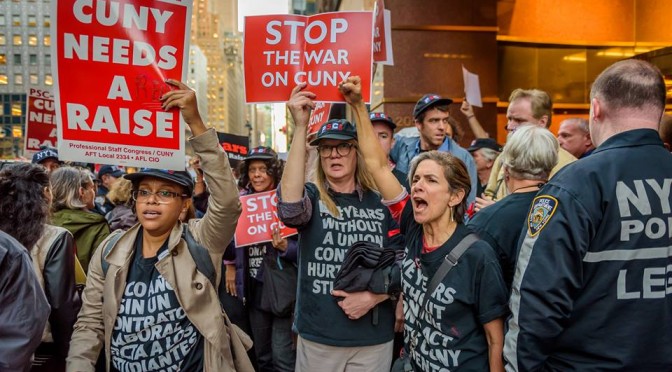 When is a “raise” not a raise? When the salary “increase,” adjusted for inflation, is below the base-year salary.

On June 17, after five years of working without a contract and six years without even a nominal raise, the Professional Staff Congress, the City University of New York’s faculty union, announced the main terms of a tentative contract with the CUNY Board of Trustees. Let’s examine how the salary increases in this agreement measure up against erosion from inflation.

In March I wrote a Gotham Gazette op-ed called “CUNY Faculty’s Lost Decade and the Risk Ahead,” pointing out that “In 2015, assistant and associate professors at the top salary step earned 92% in real terms of what they earned in 2006. Full professors at the top step did slightly better, taking home just under 96% of their 2006 salaries.”

These figures derived from my analysis of Bureau of Labor Statistics cost-of-living data and from information on contractual salary increases that PSC-CUNY provided.

The “raises” in the proposed new contract don’t really constitute a raise, even for those of us at the top full professor salary step, who received a special increment in 2009 under the old contract. Most CUNY faculty will again earn in real terms what they took home in 2007. We full professors at the top step will receive slightly less inflation-adjusted salary than we did in 2010 (see table below).

So will I vote to ratify the proposed deal? Yes, but only while holding my nose. I won’t delude myself that I’m getting a real raise, but I would rather be earning almost what I earned in 2010 than 96% of my 2006 salary.

The agreement also contains other extremely important provisions. Adjuncts, for example, the most exploited sector of CUNY’s faculty, will now have the right to multi-year appointments. CUNY management has agreed to negotiate a plan to reduce the onerous teaching load (seven courses per year for full-time faculty at senior colleges) by one course per year. Graduate Assistants who become Adjuncts will receive health insurance. These are all important gains and, in the current context of permanent austerity and bloodletting in public higher education, it would be foolish to vote against them.

The proposed seven-year contract covers a period that has already mostly elapsed. It expires in little more than a year, on November 30, 2017. Wouldn’t it be great if next time CUNY management and the PSC-CUNY could negotiate an actual “new” contract before that date, one which provides raises instead of “raises”? Then, instead of having to spend years lobbying in Albany for a new contract, walking picket lines and testifying before the CUNY Board of Trustees, we could devote ourselves to advancing knowledge and serving the hundreds of thousands of students who attend the largest public urban university in the United States. 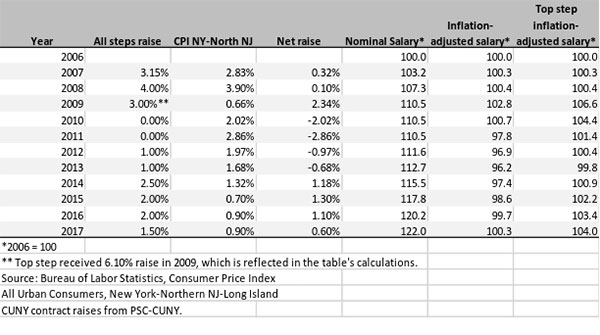 ***
NOTES: Three factors understate the salary erosion estimates in the table: (1) Future inflation is unknowable; the Bureau of Labor Statistics estimates 2016 annual inflation at 0.9% for the period through May; I use this figure for 2016 and 2017 even though inflation for key areas (housing, healthcare, food) and overall inflation in 2016-2017 could be higher (because of pending interest rate hikes by the Fed, rising energy prices, financial instability in the European Union and other reasons); (2) The raises in the new contract kick in on April 20 of the respective years; for simplicity I have them covering the whole calendar year; and (3) the lump sum retroactive pay and signing bonus will be taxed in one calendar year.