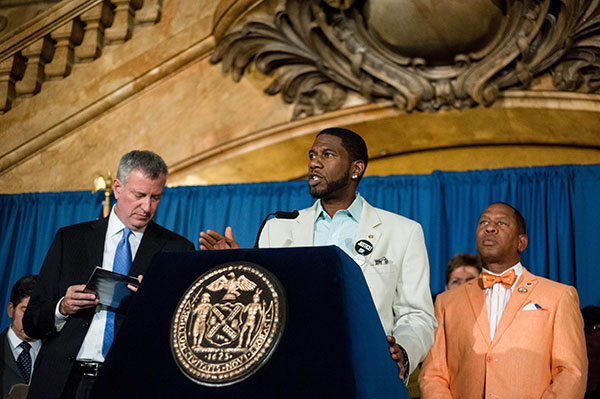 Given where we are in the policing discussion in this city and country, and the acknowledgement of how deeply systemic the problems lie, focusing on the departure or hiring of any one Commissioner has always simplified a complex problem. I have never known a time when people were not calling for the removal of an NYPD Commissioner as the solution to policing issues in our city.

It was right for many of us to express concerns when Commissioner Bill Bratton was chosen, given troublesome incidents in Boston, Los Angeles, and right here in New York City. It was also our duty to point out clearly and boldly when we thought he was not helping us steer the conversation in the right direction. Indeed, there were times when Commissioner Bratton showed contempt for the City Council's role in government. The Police Department is not an agency unto itself, free of the city’s legislative body. The Commissioner has also, at times, used language that ranged from insensitive to incendiary and dangerous.

Still, we would be wrong to say that no change has occurred during his tenure.

We can argue about what the changes that have occurred mean, how effective they are and will eventually be, but we cannot ignore them. While there are still issues with the percentage breakdown by race of who is getting stopped and arrested, there have been significant drops in stop-question-and-frisks and marijuana arrests. The Neighborhood Coordination Officers Program, while not true community policing, is a good attempt to move away from focusing on arrests and summonses. There have been legislative victories, collaborations, and of course, the retraining of the entire force -- all while pushing crime to historic lows.

It takes many partners to deal with public safety and NYPD has a crucial role.

With all that said, we are not where many of us thought we would be in 2016, particularly in the areas of trust and accountability. In these areas improvement has been slow, even stagnant. This is where the new Commissioner, James O'Neill, whom I've grown to view as an honest broker, can really focus on moving the ball forward. I congratulate him on his appointment and look forward to working with him.

Long-lasting change cannot happen until we tackle all of the socioeconomic and structural obstacles that poor, black, and brown communities face. Unemployment, inadequate housing, and an unsatisfactory education system are all problems that need interagency solutions. Police have a tough job, and we owe it to them and the community not to ask them to do jobs that they shouldn't be doing.

In addition, the City Council has a legislative responsibility to do its part. To that end I am disappointed to hear Chief O’Neill say he will support the current agreement around the Right to Know Act (RTKA) without creating law. The RTKA goes hand-in-hand with the new neighborhood policing model, as well as the Right to Record Act, which helps protect both police and community. Together, they are responsible, common sense laws that will promote transparency and accountability in the police department, with the RTKA proposals mirroring recommendations from the President's Task Force on 21st Century Policing. These pieces of legislation will also help repair the relationship between the department and black and brown communities.

While improved policing practices and common sense legislation are steps in the right direction, we cannot expect the troubles of the community to be fixed solely by police and lawmakers. If we are honest, the biggest improvement would be the complete acceptance that the responsibility for public safety cannot be left to police alone. This acknowledgement must be combined with concentrated funding for other resources that complement, match, or exceed investment in law enforcement.

I look forward to working with the new Commissioner on these ideas and others.

When asked about the future of policing in this city when Commissioner Bratton was appointed I said then that I was “cautiously optimistic.” As an elected leader, I make no apologies for remaining optimistic in the worst and best of times while fighting to do right. If asked again as Commissioner O’Neill is set to take over, my answer would be the same.

***
Jumaane D. Williams is a City Council member from Brooklyn and co-chair of the Council's Task Force to Combat Gun Violence. On Twitter @JumaaneWilliams.