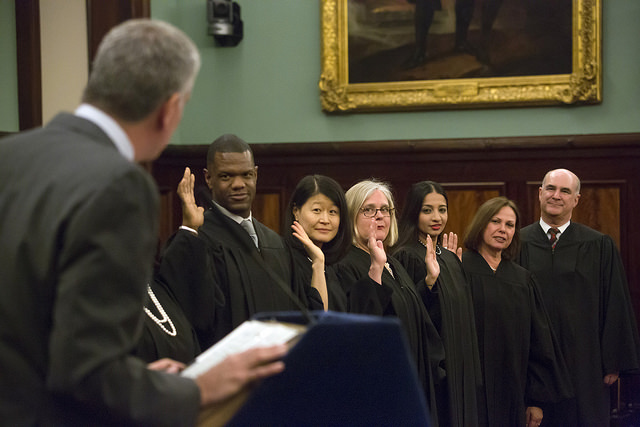 We need to change the New York State Constitution to curb corruption in our government, we simply cannot wait for our elected officials to make those changes for us.

Finding examples of corruption and self-serving behavior among our politicians in New York City and State is not difficult. It is part of all three branches of government - the legislative, executive, and judicial. In fact, New York has a judicial nominating process that has been condemned by Supreme Court justices. There is too much secrecy and politics in the process by which our judges are chosen, threatening to delegitimize our courtrooms.

Of the moment, this Summer New Yorkers are again witnessing the results of a judicial nomination process controlled by the political parties in Manhattan and Brooklyn. In Manhattan, Supreme Court Justice Doris Ling-Cohan was not recommended for reappointment by the Manhattan Democrats, and the party only allowed her to proceed to the nominating floor after party members and lawyers expressed their outrage. In Brooklyn, the Brooklyn Democratic Party declined the reappointment of Justice Laura Jacobson earlier this summer. Although there is much speculation regarding the political machinations that led to both of these experienced, well-regarded judges losing the Democratic Party’s support, we don’t know the actual reasons in large part because the process is shrouded by the private political organizations which make these decisions.

In his opinion, Justice Scalia described the New York judicial nomination process and its criticisms. “In 1911, the New York Legislature enacted a law requiring political parties to select Supreme Court nominees (and most other nominees who did not run statewide) through direct primary elections. The primary system came to be criticized as a ‘device capable of astute and successful manipulation by professionals,’ Editorial, N. Y. Times, May 1, 1917, and the Republican candidate for Governor in 1920 campaigned against it as “a fraud” that ‘offered the opportunity for two things, for the demagogue and the man with money,’ N. Y. Times, Oct. 23, 1920.”

Justice John Paul Stevens, in a concurring opinion, went further and quoted Justice Thurgood Marshall, saying "The Constitution does not prohibit legislatures from enacting stupid laws." In spite of the 2008 decision’s emphatic condemnation, this is still the system we have today.
To be sure, we cannot completely eliminate the politics from choosing judges. However, we live in a democracy that values the impartiality and strength of its judiciary. We should do all we can to instill people with confidence that when they go into the courtroom, they are being heard by the most impartial decider possible. Nobody going through a messy divorce wants a political hack making a decision over which parent gets custody on an appeal. And no judge should have to worry about whether their decision on an election matter will risk their reappointment years down the line.

Let’s remove the judicial nomination process from the total control of the political parties. In most of the city’s boroughs, Democrats decide who gets on the ballot and those candidates win without any actual opposition due to their majority voting bloc. Our elected officials will never have the will to change this system because they have zero incentive to do so. The best way to achieve this reform is by voting “Yes” in November, 2017 to a Constitutional Convention and working out a better, less partisan, less tightly controlled process for nominating, voting on, and appointing judges in New York State.