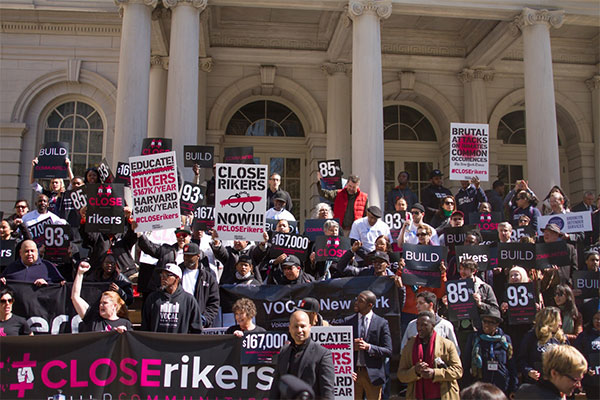 Glenn Martin & others rally to #CLOSErikers (via JustLeadershipUSA)

For years, New Yorkers have been barraged by stories of violence and corruption on Rikers Island. On Saturday, September 24, hundreds of New Yorkers -- including people who have spent time on Rikers Island and their families; criminal justice reform activists; faith leaders; and elected officials -- will march together and demand that Mayor de Blasio #CLOSErikers.

Led by JustLeadershipUSA, in partnership with the Katal Center for Health, Equity, and Justice, the growing campaign has been endorsed by nearly 100 organizations representing a broad swath of New Yorkers. Saturday’s march and rally mark a turning point in the effort to shut down what City Comptroller Scott Stringer has called “an urban shame.” This is a movement with momentum that cannot be ignored.

By now, the reasons to shutter this jail once and for all are painfully obvious. The “systematic culture of violence” identified by U.S. Attorney Preet Bharara in his scathing 2014 report continues unabated, contrary to the Mayor’s blandishments that conditions are improving.

On Aug. 28, the Daily News reported that its review of internal documents showed that Rikers Island higher-ups were routinely “purging” unfavorable violence statistics to create an “illusion of reform.” Every week the media reports new atrocities: rapes, beatings, knifings, suicides. This cannot go on. Rikers Island is a human grist mill and an ugly stain on our city’s reputation for being progressive and compassionate. Rikers cannot be fixed; violence and corruption are embedded in its DNA.

With all of these problems, who can oppose closing Rikers? Mayor de Blasio has contended that closing the facility is “unrealistic” and too costly. On Saturday speakers will point out that our current system is too costly: We are spending $208,500 a year to detain one person on Rikers Island. That is money that can be better spent on programs to help individuals and communities. Furthermore, 80 percent of the people detained on Rikers are pre-trial, and should be waiting at home until they have their day in court.

Equally essential to closing Rikers is our demand to build communities. For decades, Rikers Island has meant tremendous suffering to our city’s most vulnerable communities. Most detainees come from the city’s poorest neighborhoods and 89 percent are black or Latino. More than 40 percent of the detainees have a diagnosed mental illness. Many others suffer from drug addiction. Confinement at Rikers only exacerbates these conditions. Spending months and even years in detention before trial because of the inability to raise bail money leads to the further impoverishment of families, including children. Claiming that ending a human rights disaster in our midst is “unrealistic” dishonors this great city.

The only thing preventing us from figuring out how to do the right thing is a lack of political will. And the right thing includes investing in those neighborhoods that have been most seriously damaged.

There have been efforts to close Rikers in the past – once during the Koch administration in the late 1970s and again under Mayor Bloomberg. Both efforts suffered from a lack of community involvement and support. Today, the #CLOSErikers campaign is building momentum with community support from across our city.

For many of the people who are part of this campaign, who will be on the streets Saturday, this issue is deeply personal. We’ve both been directly affected by experiencing the terrors of Rikers -- Glenn spent time on Rikers twice during the 1990s; Anna’s son Jairo recently spent more than five years there waiting for trial. Most striking is that the horrors of Rikers Glenn experienced in the 1990s remain largely unchanged today.

We are marching because we have had enough of the human carnage and want to spare future generations of New Yorkers from it. It is time to close Rikers and build communities.

The march will begin in Astoria at Steinway Street and 30th Avenue at 1 p.m. on Saturday, September 24.  New Yorkers will march to a rally at the foot of the Rikers Island bridge at 19th Avenue and Hazen Street, where we’ll call on Mayor de Blasio to take action and close Rikers. Speakers include Emily Althaus, actress in Orange Is The New Black, elected officials from the City Council and the state Legislature, and numerous community leaders who have been impacted by Rikers. Join us.

***
Glenn E. Martin is the Founder of JustLeadershipUSA (JLUSA), an organization dedicated to cutting the US correctional population in half by 2030, and a national criminal justice reform advocate who spent six years in New York prisons. On Twitter @glennEmartin.

Anna Pastoressa’s son Jairo spent nearly six years at Rikers awaiting trial, suffering physical and emotional torment. She endured the indignities of visitation and the outrageous delays in the criminal justice system and is now a prison reform advocate.