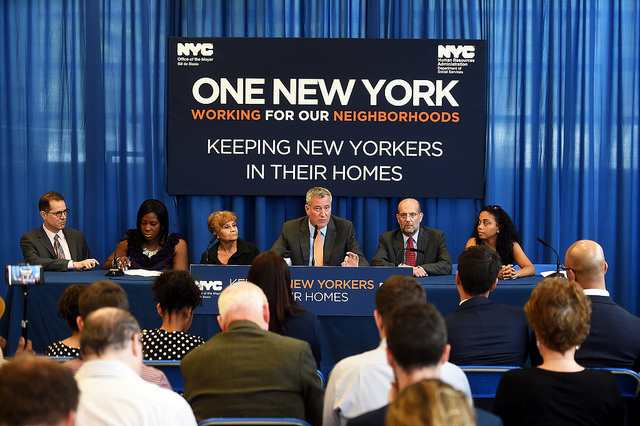 I’m a tenant lawyer: I work for a nonprofit that receives funding from the City to defend low income people in their eviction proceedings and keep them in their homes. I can do a lot for tenants and I know Right to Counsel for indigent folks facing eviction is good policy, everyone should have a lawyer in housing court. While I can help people facing unlawful eviction, I cannot make housing more affordable in New York City. But the real reason most people face evictions in housing court is not just because they cannot afford housing -- it is a policy called vacancy decontrol.

Housing has been a challenge in New York City for more than a century, but we actually have had some form of rent regulation meant to mitigate that problem for nearly the same amount of time. It has appeared in different forms and shapes. Currently we have around one million apartments under rent stabilization. It has kept people with a roof over their head for nearly 50 years.

But rent stabilization is much less effective now than when it started. From 1974 until 1993, most rent stabilized apartments were more or less guaranteed to remain that way because of automatic lease renewals. But in 1993, the law changed and gave landlords a way to get an individual apartment out of rent stabilization once it became vacant. Vacancy decontrol became law with the support of Democrats and Republicans in the State Senate (many of whom are still around today). The law became much worse in 1997, again with wide bipartisan support. And now, the more neighborhoods gentrify, the more landlords get very hungry to push their tenants out.

Imagine what our city would look like today if vacancy decontrol had not come into effect? I am experienced enough to know that most of my clients facing eviction would be better off if vacancy decontrol was not driving their landlords toward eviction. Half my clients face evictions with dubious claims, and everybody in court - the lawyers, the judges, and certainly the tenants, know that beneath the legal pretext, the real desire to evict them is to get the apartment up to market rate rent. The other half of my clients face nonpayment cases in increasingly expensive apartments with no option of more affordable housing to find, because more and more of their neighborhood apartments have been decontrolled.

To be sure, a tenant with a lawyer will discourage some landlords from weak claims due to the potential cost of a lengthy trial. But money incentive to get that apartment to market rate is very high -- an extra $10,000 to $20,000 to evict a stabilized tenant in a complicated trial might be worth the hundreds of thousands a landlord can make in the long run.

While I’m happy to engage a hard fight in a case to keep people in their home, I will not win every time. And more importantly, the Right to Counsel bill before the New York City Council only covers people under 200% of the federal poverty level. There are a lot of people who will never be able to afford a quality housing lawyer but do not fit into the bill’s criteria, which would provide publicly funded attorneys to any qualifying tenant facing eviction. Unless the state Legislature changes the rent laws, we are never getting that affordable apartment back -- this discussion cannot ignore the vacancy decontrol elephant in the room.

And that is the important point - we could hire 50,000 more lawyers, but we could also just eliminate vacancy decontrol and fix housing policy in New York City. Taking that step, or any step in that direction, would secure housing for thousands and thousands of New Yorkers. We can fix the rent laws, and if we did that we might not need so many lawyers.