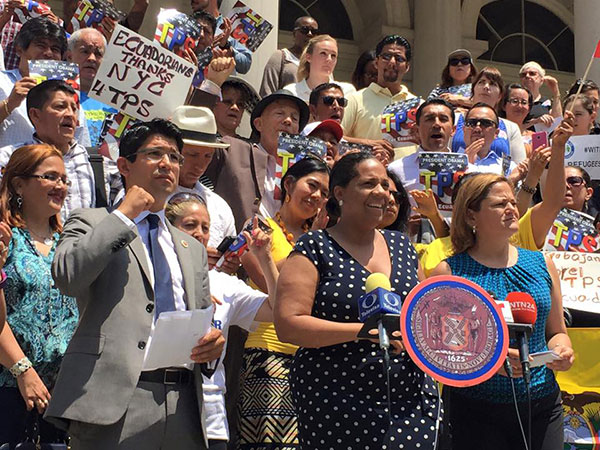 New York’s immigrant families are waking up terrified as President-elect Trump, his supporters and growing administration spew hate. In spite of his new stance to “work something out” for Dreamers, Trump’s words are met with lack of trust. As the children of immigrants, we take attacks from Trump and his supporters personally and are filled with the courage needed to fight harder and smarter than ever to protect the rights and freedoms of diverse immigrant communities throughout New York City.

To this end, the New York City Council passed a resolution this week affirming our commitment to remain a sanctuary city for immigrants, and we personally delivered it hours later to Trump Tower. Our resolution codifies past commitments to sanctuary while signaling to everyone that we will invest the time, energy, and resources required to make good on our promises.
Our resolve is clear: we are here to stay.

Our City Council, like those in municipalities across the country, will play a lead role in this fight by redoubling our efforts to keep New York City a true sanctuary city. With the support of our Council colleagues, Speaker Melissa Mark-Viverito, Mayor Bill de Blasio, fierce advocates, and brave New York families, we commit to immigrants that this city will remain a safe home.

This week’s sanctuary city resolution memorialized our commitment, and we will ensure it through, in part, the following:

First, we will defend our victories by preserving existing policies, initiatives, and programs that protect immigrants.

Detainer Law: The Council’s 2014 detainer discretion law has protected between 3,000 and 4,000 New Yorkers per year from deportation. The law draws a bright line between municipal law enforcement and overly aggressive federal immigration enforcement. All New Yorkers are safer when there is trust between immigrants and the NYPD because crimes are more likely to be reported and witnesses feel safer. Under the Trump Administration, we commit to gear up for legal challenges to this law, and we expect to prevail.

The New York Immigrant Family Unity Program (NYIFUP): NYIFUP provides legal services for New Yorkers who are detained and facing deportation. It has been highly successful and serves as a blueprint for other progressive municipalities. Continued funding for NYIFUP is not guaranteed by the city. The de Blasio administration must increase NYIFUP funding and make it permanent.

CUNY Citizenship Now!: Since 1996, the City University of New York lawyers, paralegals, and volunteers have assisted hundreds of thousands of immigrants with legal advice, representation, and referrals. Programs like this are worthy of celebration and require our continuing support.

IDNYC: IDNYC is the largest municipal ID program in the country with over 900,000 subscribers. It promotes civic participation, the economy, and public safety. We will ensure it continues to thrive. We call on the de Blasio administration to do everything in its power to protect the personal data of IDNYC cardholders. Entities like the NYPD, banks, and cultural institutions must continue to honor this government-issued ID. We will do our part in the Council, and in conversations with the mayor, to protect and defend the privacy of current and future IDNYC cardholders.

Second, we must expand protections and investment for New York City immigrants.

We are committed to building upon our victories, expanding existing initiatives, and creating new services, through efforts such as:

Expanding Funding for Immigration Legal Services: Today, NYIFUP is limited to individuals who are detained and do not have a prior order of removal. In anticipation of the Trump administration, the program should be expanded to provide representation to other classes of immigrants facing deportation. The City Council and the de Blasio administration have also recently invested in legal representation in complex immigration cases. The demand for this type of representation will likely expand under a Trump presidency, requiring increased funding for these services, as well. We commit to fighting for these increases in funding for immigration legal services in the fiscal year 2018 budget negotiation process.

Right to Immigration Counsel Law: A right to immigration counsel enshrined in law would help ensure that all individuals going through immigration court proceedings are represented by competent lawyers. While this might be expensive, we cannot let that deter us from doing what is right. We commit to working with our colleagues in the Council and the mayor to further assess the feasibility of a Right to Immigration Counsel Law.

Protection from Notario and Immigration Attorney Fraud: One of the clearest ways to protect immigrant families is to ensure they are not victimized by unethical “notarios” (notaries who present themselves as immigration legal service providers) and incompetent or sham attorneys. Notario and attorney fraud harms vulnerable New Yorkers seeking immigration assistance. Our constituents encounter fake lawyers, scams, inflated fees, and predatory providers daily. Often, in addition to bilking families out of thousands of dollars, these bad actors cause serious harm to their legitimate immigration cases. We commit to working with the Department of Consumer Affairs, the Mayor’s Office of Immigrant Affairs, and advocates on continuing to protect immigrants from notario and immigration attorney fraud.

Expanding Participatory Budgeting: Each year, through Participatory Budgeting (PB), Council members voluntarily cede capital budget allocation decisions to residents of their districts who collaborate to decide which projects best serve their communities. We have repeatedly seen an overwhelming number of PB ballots in languages other than English, which demonstrates the engagement of immigrants in this process. This also indicates to us that while many immigrants cannot vote in other types of elections due to their immigration status, many are eager to participate in our city’s democratic process. The city all immigrants and other residents love, contribute to, and call home should welcome civic participation. We commit to strengthening PB in our districts and supporting its growth across the city.

We are prepared for a Trump era during which immigrant communities will likely be under attack. New York City will stand as a beacon of welcome, hope, and protection for immigrants.

In the New York City Council, we commit to defending our history of hard-won victories, while also expanding protections for immigrants. We know cities will need to hold the line against Trump administration attacks. As New Yorkers, we embrace that challenge together.