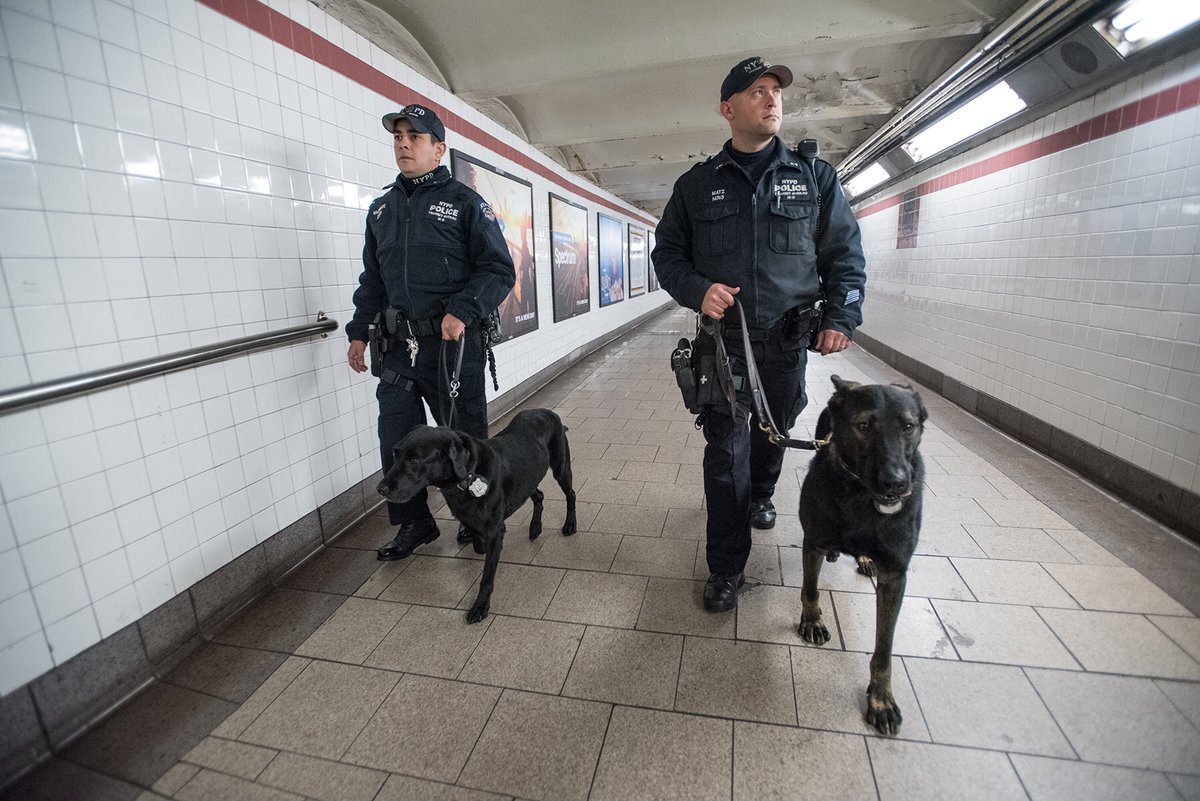 NYPD officers and dogs in the subway (photo: @NYPDnews)

Over the past five years, in the course of our research and advocacy efforts, we at PROP have become convinced that the NYPD's unjust policies not only violate our country's central founding principle of providing equal justice for all, but also that the department's racist practices are so entrenched, so long-standing, that only fundamental and far-reaching changes can end -- really end -- abusive and discriminatory policing in our great city.

Relevant facts and PROP findings show the dire need for real reform:
-In 2015 the NYPD made over 20,000 arrests for the possession or sale of small amounts of marijuana; and 92.5% of these arrests involved New Yorkers of color. This, despite the research showing that white people use and sell the drug in equal or greater proportions than African-Americans and Latinos.

-The largest category of NYPD arrests in 2015 was fare evasion, with over 29,000 arrests, 92% involving New Yorkers of color. During 2015, NYPD officers also issued nearly 124,000 summonses for fare evasion, bringing the total number of punitive interactions between officers and New Yorkers for this offense to over 153,000 for the year, or an average of nearly 420 per day.

-Of the NYPD's juvenile arrests in 2015, 94.9% involved African-American or Latino young people.

-Of the New Yorkers locked up on Rikers Island and in other city jails, about 88% are African-American or Latino.

-Over the past two years, PROP's Court Monitoring Project, where volunteers observe proceedings in arraignment parts of the city's four major boroughs, found that over 90% of the observed cases involved New Yorkers of color. Virtually none of the defendants was even charged with a predatory or dangerous offense.

These and similar undeniable facts, among other things, have shown us that NYPD daily practices are marked by a stark racial bias. We know, too, that political leaders, whatever their motivations, have at worst lied to the public about this ugly truth or at best misrepresented the harsh reality of NYPD practices.

Given our well-founded skepticism about mainstream leaders' willingness to address the problem of discriminatory and abusive policing and our understanding of how deeply embedded the problem is in the NYPD's institutional policies and culture, we at PROP have chosen as a principal strategy for 2017, a year of city-wide municipal elections, to focus our determined efforts on injecting sweeping reform proposals into the public debate.

Our recommended changes will aim to advance substantive remedies that no mainstream politician will currently support. Not because they don't make sense or are not the right things to do, but because they are too politically charged.

PROP's proposed reforms for fundamental change will include:
-Abolishing "broken windows" policing that targets low-income New Yorkers of color for engaging in petty infractions that have been virtually decriminalized in well-off white communities.

-Eliminating the quota system for evaluating officers' performance that emphasizes only their punitive interactions with New Yorkers and that, in effect, incentivizes bad policing.

-Having mental health professionals, not police officers, be the first responders to emergencies involving persons in psychiatric crisis.

Our goal for 2017 is grandiose and, admittedly, quixotic: to, starting with New York City, call America home, to create an America, starting with the Big Apple, that adheres to the founding principles of which she is so justifiably proud. And it's only by agreeing to and instituting fundamental and far-reaching changes, starting with her policing and criminal justice systems, that America can fulfill its stated vision of a just, livable, and inclusive society for all its people.

***
Bob Gangi is the executive director of PROP, the Police Reform Organizing Project. On Twitter @PROPNYC.