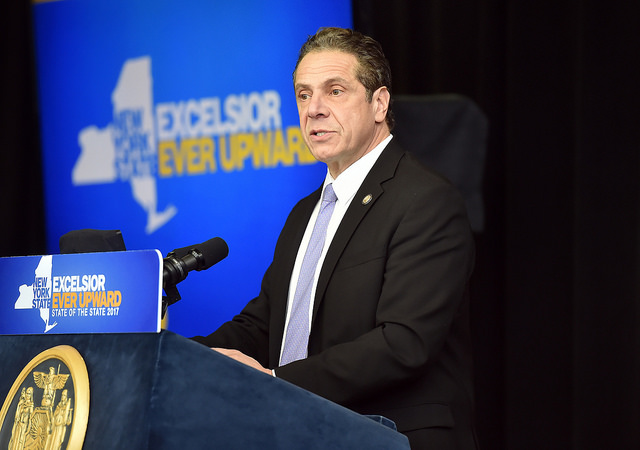 New York Governor Andrew Cuomo has joined the chorus of criticism against President Trump’s ban on refugees and other immigrants from seven predominantly Muslim nations. “I never thought I’d see the day when refugees who have fled war-torn countries in search of a better life would be turned away at our doorstep," the governor said in a statement following the president’s executive order. "We are a nation of bridges, not walls, and a great many of us still believe in the words 'give me your tired, your poor, your huddled masses...' This is not who we are, and not who we should be.”

Mario Cuomo strikes a resounding chord
Andrew Cuomo's support for immigration and diversity echoes the sentiments of his father, former Governor Mario Cuomo, who served from 1983 to 1995. The elder Cuomo was the first Italian American elected as governor of New York State. He had no tolerance for prejudice and worked tirelessly for human equality and dignity. A champion of recognizing merit regardless of sex or race, he appointed the first Black, the first Latino, and the first two women judges to the state's Court of Appeals.

In talking about immigration issues, Mario Cuomo often recalled the story of his parents, Andrea and Immaculata Cuomo. Penniless and unable to speak English, they had come to the United States from the Italian province of Salerno, south of Naples -- Andrea in 1926 and his wife a year later in 1927. After spending three years in Jersey City, they moved to the Queens neighborhood of South Jamaica, where they opened a grocery store and raised their family.

By that time, there were thousands of Italian Americans in New York. But across the nation, there was lots of prejudice against Italians for their religion (mostly Catholic), speech (most learned English, but often it was not perfect) and culture (they retained some old country ways but assimilated into their new land and were proud to be Americans). Congress enacted laws in 1921 and 1924 to cap total annual immigration and impose numerical quotas based on immigrant nationality that favored northern and western European countries. The laws were directed against Italians and others from southern Europe. “The old belief in America as a promised land for all who yearn for freedom had lost its operative significance," with the passage of these laws, wrote historian John Higham in his book “Strangers in the Land: Patterns of American Nativism, 1860-1925.” It had been replaced by a "new equation between national loyalty and a large measure of political and social conformity." By the time Mario Cuomo's parents arrived, a few years after the restrictive legislation, the flow of southern and eastern European immigrants had been greatly reduced.

National immigration policy continued to change and became more open in later years. But Mario Cuomo, born in 1932, remembered the sort of prejudice his parents faced and fought it his entire career. For him, it was a personal matter as well as a matter of public policy.
In a 1992 speech at New York University, Cuomo decried "nativist sloganeering and parochial fear-mongering that's been aimed at every group of new immigrants throughout our history." He recalled his parents' lives. "I thank God the country didn't say to them 'we can't afford you right now; you might take someone else's jobs, or cost us too much,'”, he said. “I'm glad they didn't ask my father if he could speak English, because he couldn't. I'm glad they didn't ask my mother if she could count, because she couldn't...I'm glad they didn't ask my father what special skills he brought to this great and dynamic nation because there was no special expertise to the way he handled a shovel when he dug trenches for a sewer pipe. I'm glad they let him in anyway."

Cuomo worked to rally the Democratic party for the cause of immigrants. "We speak for the minorities who have not yet entered the mainstream," he said in his address to the 1984 Democratic convention. "We speak for ethnics who want to add their culture to the magnificent mosaic that is America."

Andrew Cuomo continues a New York tradition
Speaking at the 2016 Democratic National Convention last July, Andrew Cuomo sounded a similar note. "The Trump campaign is marketing a great distraction, using people’s fear and anxiety to drive his ratings," he told the delegates. "Their message comes down to this: be afraid of people who are different — be afraid of different religions and different colors and different languages. Stop immigration and they believe the nation will automatically rise. It’s not right, it’s divisive, it’s delusional, and we must expose the truth to the people of this nation. Unless Republicans are all Native Americans, then they are immigrants too."

In a speech this past November, Andrew Cuomo asserted that he and New York will fight against the spread of anti-immigrant fear. Like his father, he put it in personal terms. "If there is a move to deport immigrants then I say start with me,” he said. “I am a son of immigrants. Son of Mario Cuomo, who is the son of Andrea Cuomo, a poor, Italian immigrant who came to this country without a job, without money, or resources and he was here only for the promise of America."

Cuomo intends to make good on his promise to protect immigrant rights. He has ordered his counsel's office to explore legal options to help anyone detained at New York airports to ensure their rights are protected. Promising more action, on January 29 he said, “As New Yorkers who live in the shadow of the Statue of Liberty, we welcome new immigrants as a source of energy and celebrate them as a source of revitalization for our state. We will ensure New York remains a beacon of hope and opportunity and will work to protect the rights of those seeking refuge in our state."

New York -- Land of promise
The fight over refugees and immigrants is likely to be a spirited one. The Trump administration promises to strengthen restrictions and ramp up stringent vetting of foreigners who want to enter the country. New York State seems likely to insist on continuing its historical tradition of welcoming newcomers. New York has led before and will again this time. It is a natural role for our state, particularly since New York City is where more immigrants have entered the nation over the years than at any other place.

Immigration policies varied over the years, but many of the immigrants have had one thing in common - aspirations for a better life. "More than anything else, the immigrants come with dreams -- dreams that hunger might become a thing of the past, dreams that restrictions and discrimination might be replaced by rights, and dreams that poverty might be traded for security and opportunity, if not for oneself, then at least for one's children or grandchildren," writes Andrew Anbinder in his new book “City of Dreams: The 400-Year Epic History of Immigrant New York.” He continues, "These dreams characterized the New York immigrant story from the arrival of the first Dutch settlers through the heyday of Five Points, the Lower East Side, and Little Italy. Those same dreams dominate the lives of New York's newest immigrants, whether they are Chinese or Guyanese, Jamaican or Dominican, Mexican or Ghanaian. The story of immigrant New York is truly a story of dreams."