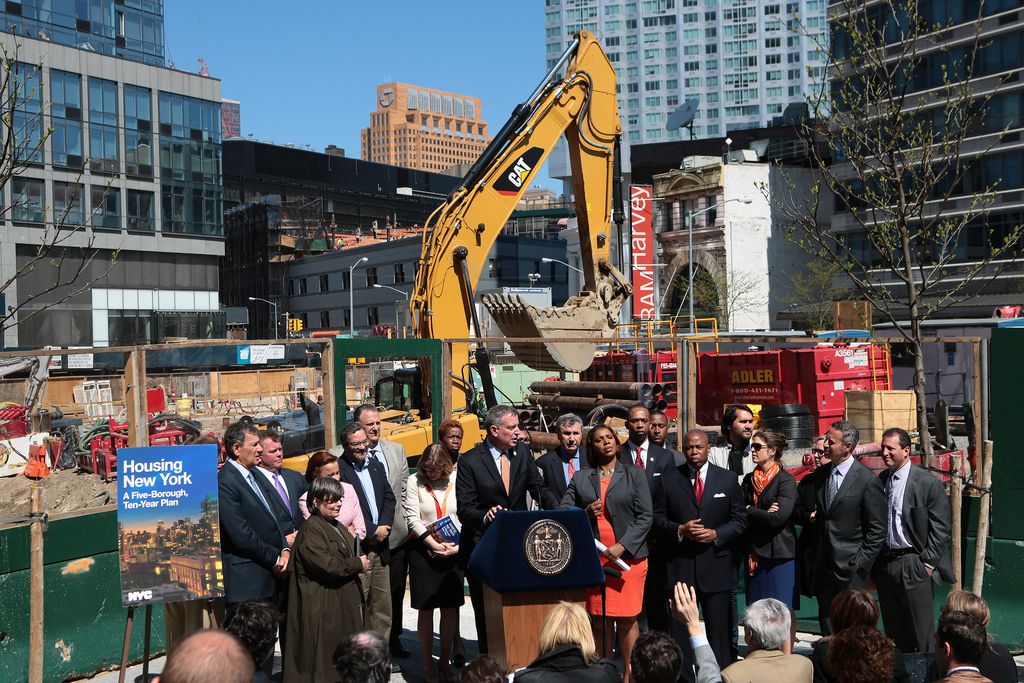 Mayor de Blasio at a ground-breaking (photo: The Mayor's Office on Flickr)

Now it is time to put those resources to work by moving past anti-development attitudes that have distorted the conversation around affordable housing for too long.

Affordable housing builders have – with limited resources – already made important strides to house low-income New Yorkers under Mayor de Blasio’s leadership, with more than 13,000 homes built and preserved for households at or below 50 percent of area median income (AMI).

NYSAFAH and its members have long made it clear that we are prepared to do more for New York’s lowest income families and so have continually advocated for the additional resources necessary to build this housing. Every New Yorker deserves access to safe, quality affordable housing and we will not stop until that mission is accomplished.

To understand the real value of this announcement, we must recognize the previous lack of financial assistance available to build housing for very-low and low-income New Yorkers.

The efforts of affordable housing developers have been hindered by federal, state, and local program provisions under which NYSAFAH’s members can build. Additionally, due to the rising cost of land and construction in New York, it has been nearly impossible to build new housing for the lowest income families without the offset of units for higher-earning households in the low- and middle-income brackets. The mayor’s new subsidy will allow developers to specifically address the needs of those making less than $40,000 per year.

Too often critics of smart development have distorted reality by falsely claiming that developers have purposely not paid enough attention to low-income housing. These critics, backed by politically motivated construction unions, have tried to convince New Yorkers and elected officials that the problem lies with developers rather than to acknowledge the obvious lack of resources required to build much-needed homes. The attacks on affordable housing builders have for a long time ignored the fiscal reality of what is required to support low-income families and maintain their homes with a fixed rental income stream.

Another lesser known fact is that affordable housing developments remain under long-term affordability agreements for 25 years or more, despite the reality of costly changes to market conditions and utilities. With the recognition by Mayor de Blasio that there is need for more subsidy, we can continue to take steps to unlock the full potential of low-income housing development.

We must move beyond the political posturing and rhetoric, and every single stakeholder must work in partnership to positively transform the lives of low-income families across the five boroughs. NYSAFAH members are ready to do just that – and we hope that others will join us in building a better future for every New Yorker.

***
Jolie Milstein is president and CEO of the New York State Association for Affordable Housing (NYSAFAH).