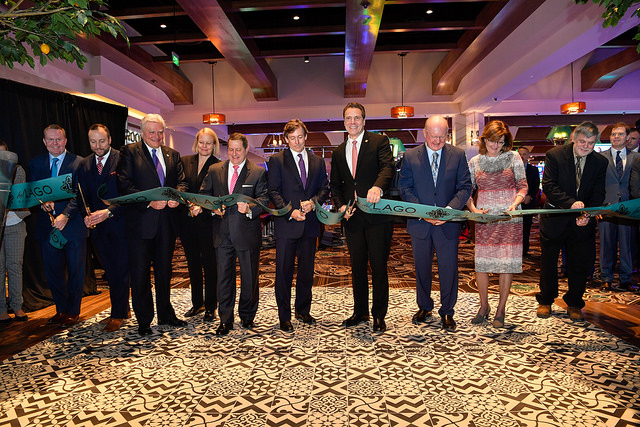 Business money and New York politics
The New York Joint Commission on Public Ethics, an oversight panel, recently proposed legislation to increase the requirements for lobbyists to disclose their political fundraising. The recommendation would help show the ways in those seeking to influence policy by day are raising money for policy-makers by night.

Blair Horner, legislative director for the New York Public Interest Group, one of several groups critical of New York's loose campaign finance laws, said recently that during this time in the legislative session in Albany, "It's pretty much pedal-to-the-metal when it comes to [legislators] hitting up lobbyists for campaign contributions."

The New York State League of Women Voters called for "a significant reduction of all contribution limits, special 'pay-to-play' limits on contributions by lobbyists and those who do business with the state and eliminating the LLC loophole." The Citizens Union, another reform group, has also called for campaign finance reform in New York.

In his annual message to the Legislature, the governor denounced "political contributions by business corporations" as "morally wrong....Their contributions are influenced by business and not by patriotism and, like other investments, are made in the hope and expectation of financial return or to avert threatened pecuniary injury." The governor recommended making political payments by corporations a criminal offense.

It almost sounds like Governor Andrew Cuomo last year and this year. But actually, it was Governor Frank W. Higgins, in 1906.

Concern with the influence of campaign contributions has deep historical roots here in New York.

In the 1904 presidential campaign, the New York World alleged that business interests were funding the campaign of President Theodore Roosevelt, hoping to curry favor with his administration. His Democratic challenger, former New York Chief Judge Alton Parker, charged that TR was receiving large contributions from New York railroad magnate Edwin H. Harriman and Wall Street banker J.P. Morgan. "Would the public interest be safe in the hands of a party the greater part of whose campaign funds had been contributed by corporations and trusts?" Parker asked. Roosevelt denounced the charges as "unqualifiably and atrociously false."

Historians now know Parker was right but at the time he could not produce concrete proof. Roosevelt was dissembling. For instance, he had secretly asked Harriman to contribute to the Republican Party in New York State with the plea that its gubernatorial candidate, then-Lieutenant Governor Frank Higgins, needed help getting elected. Harriman complied, raising about $250,000.

But, as TR fully realized, supporting the party and Higgins in New York also meant indirectly supporting Roosevelt himself -- he was running for president on the same ticket. TR had directed that some business contributions be returned to their donors but campaign aides had not followed through and the president had not really checked.

On the other hand, Parker, too, received large contributions from business interests, mostly in New York City, though not as much as Roosevelt. There were rumors in the press, but nothing specific came out in public.

TR won in a landslide. But public concern about campaign finance was sharpened.

The next year, the Legislature investigated the management of insurance companies, uncovering a corrupt pattern of insider trading, fraudulent accounting, and deceptive sales practices. But the committee's counsel, Charles Evans Hughes (who would later himself be a reformist governor), dug deeper and got company officials to admit to providing large campaign contributions for state and federal offices.  Hughes pressed U.S. Senator Thomas C. Platt, the long-time boss of the state Republican Party, about the real purpose of the contributions:

"Hughes: To see that the legislature, for example, did not enact legislation which they thought hostile to their policyholders?

"Platt: That is what it would amount to.

"Hughes: Is not that the way it really comes about, Senator, that they use of these contributions in the election of candidates to office puts the candidates in more or less of a moral obligation not to attack the interests supporting [them]?

"Platt: That is what would naturally be involved."

The contributions were not really bribes. They were more in the vein of what we now call building influence or access.

But the 1904 and 1905 scandals stirred public opinion. Higgins, whose 1904 campaign had benefitted from business campaign contributions as indicated above, did not mention that fact when he made his strong appeal to the Legislature for action in 1906.

After Governor Higgins' speech, the Legislature passed three pieces of legislation. One prohibited corporate campaign contributions. Another required candidates and political committees to make public a record of their campaign receipts and expenditures. A third redefined corrupt practices by defining what campaign expenditures were acceptable.

Closing one door, opening another
The campaign finance law was changed and updated in 1949 and 1976. It currently provides that corporations are limited to political donations of $5,000 a year, according to the New York State Board of Elections.

But there is a large loophole or exception, through Limited Liability Companies (LLCs). The New York State Department of State offers this definition of an LLC:

LLCs are flexible, versatile entities. But in 1976, the State Board of Elections decided that, when it came to campaign contribution, LLCs were more like individuals than corporations or partnerships. That meant they were subject to much higher limits on contributions, and much less stringent reporting requirements. The Board's decision was based on a since-changed federal definition.

This opened the way for huge contributions. The names of individuals behind LLCs are not disclosed. LLCs now routinely make large contributions to candidates for governor, other statewide offices, and the Legislature. It has become a way for monied interests to influence elections and gain access and influence.

Good government groups have called for the "LLC loophole" to be closed for several years. In 2015, the Board considered eliminating it but deadlocked, two to two, and issued a decision that it was up to the Legislature to change it. Governor Cuomo, a Democrat, and the Democratic Majority in the Assembly support the change but the Senate, which is controlled by Republicans, so far has balked. Cuomo and many legislators benefit from the contributions, so their efforts toward repeal look half-hearted.

In 2015, the Brennan Center for Justice at the New York University School of Law went to court to force the Board to change its ruling. Last year, State Supreme Court Justice Lisa Fisher dismissed the case, finding that the statute of limitations for challenging the Board's 1996 action has passed. She also characterized the issue as a “political question best suited for resolution through legislative action.”

Money and politics: what can citizens do?
One hundred and eleven years after New York's first campaign finance regulation, the state is once again searching for a solution to the issue. Good government groups and the Joint Commission on Public Ethics have set forth proposals, including closing the LLC loophole and increasing disclosure requirements. Governor Cuomo mostly seems to have given up. He has remarked that it is now up to the people to get the loophole closed.

As it turns out, the people may have a chance to do that this fall, when New Yorkers vote on whether to hold a state constitutional convention. A convention could alter the way we conduct and finance campaigns, including even proposing public funding of political campaigns.

Actually, an amendment to the constitution prohibiting corporate campaign contributions was proposed before in a constitutional convention:

"The idea of this section...is to prevent the great moneyed corporations of the country from furnishing the money with which to elect members of the legislature of this State in order that these members of the legislature may vote to protect the corporations," said its sponsor. "It strikes...at a constantly growing evil in our political affairs, which has, in my judgment, done more to shake the confidence of the plan people of small means in this country in our political institutions than any other practice which has ever obtained since the foundations of our government."

The amendment's sponsor acknowledged that the contributions were not akin to bribes. He said companies regarded them as "investments" made to get an "inexpressible sympathy between the candidate and the contributor."

Like the quotation from Governor Higgins in 1906, these words sound applicable to our situation today. But these were the words of New York attorney and statesman Elihu Root, a Republican, and the constitutional convention was in 1894.

Political insiders who were delegates to the convention opposed the amendment. It would cut off their campaign contributions. Democratic delegates derided it as a political charade. One Democrat said that "the whole business was buncombe, pure and simple, and [proposed] only for the sake of allowing Republicans to deliver patriot speeches for the record and their constituents." The proposed amendment was tabled and did not find its way into the constitution.

This year, New Yorkers have an opportunity to try again to get at the issue of money in politics. If the state's three branches of government -- governor, the Legislature, and the courts -- can't resolve the issue, then the voters may decide that is one strong reason to vote for a constitutional convention in November.

Of course, political insiders could bottle up reform amendments as they did with Root's proposal in 1894. On the other hand, with so much public interest and concern about the issue, publicity by good government groups and the media, and given the recent bouts of corruption in Albany, the prospects for changing the constitution to deal with the issue seem very good.