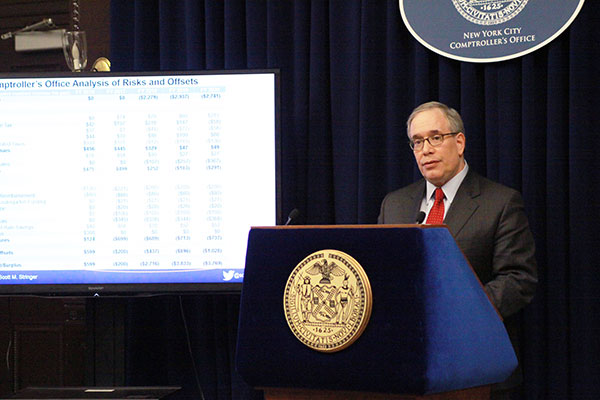 Discoveries of "Super Earths." Contact lenses with data displays and video cameras. Earpieces that translate different languages in real-time. We are truly in the great age of technology and innovation. Knowledge, access, and new tools are helping us break barriers like never before in human history.

So why, then, does it seem so hard to deliver basic transparency to the city budget? If we're realizing incredible new terrain, why is it so difficult to lay out local government spending in a way that everyday people can understand?

Public budget presentations help us live within our means, control spending, and limit the potential for misuse of taxpayer funds. Every year, the City Council does rigorous review and thorough negotiation, and as a result, in New York we’ve had 35 straight years of balanced city spending plans, enjoy a double-A rating on our municipal bonds, and routinely win awards for our budget.

But let's say, for instance, an advocate for a particular issue or an ordinary taxpayer wants to know whether $4.9 million in funding has been cut for food pantries and other nutrition services. It would be virtually impossible to know by going online. And if that’s the case for a relatively small line item, it means the $84.7 billion in proposed spending for fiscal year 2018 in the preliminary budget is utterly incomprehensible to the public.

Budgets are about priorities. They’re statements not just on how we spend, but on how we present that spending.

When it comes to clarity and accessibility, we’re failing miserably.

There is, without question, plenty of information about the budget available. The Office of Management and Budget has 18 separate documents on its website about the fiscal 2018 preliminary spending plan, and one of them – the “Departmental Estimates” – is 4,180 pages long.

Consider the original, exceptionally basic question: Is there, or is there not, a $4.9 million reduction in funding for food pantries and nutrition services in the fiscal 2018 preliminary budget?

Shockingly, not one of those 18 budget documents provides an answer. That’s because our budget isn’t laid out in terms of the programs and services that agencies deliver. Instead, it’s organized into broad “units of appropriation” and then – in voluminous departmental estimates – converted into budget codes, which are more often used to track funding sources than to describe recognizable programs.

That means unless you’re a seasoned budget expert, you’d have no idea what, if any, spending was proposed for fiscal 2018 for food pantries and nutrition services.

What’s more, it’s logical to wonder what that $4.9 million would buy exactly. How many meals does that fund? How many pounds of food can that purchase? You can’t find that information either in the budget or the Mayor’s Management Report. These simple, public-minded questions are devoid of straightforward government answers.

When it comes to budgetary transparency, even though New York is the financial capital of the world, we’re falling behind. Cities across the country have increasingly made spending information user-friendly and informative. While our budget is huge and complex, it doesn’t mean we can’t make it easier to understand.

We can start by categorizing the budget in terms of the programs and services that agencies provide, instead of presenting obscure budget codes that aren’t recognizable to anyone other than an agency budget official.

We should also show – and describe, narratively – changes from one year to the next. The public should be able to know exactly why and how proposed spending in the future differs, in programmatic terms, from spending now and prior.

If we’re spending less on a particular program, is it because we figured out how to do it more efficiently? Because demand went down? Or was the program cut as a policy choice? These are simple questions to which we know – and should present – the answers.

Efficiency matters. But by themselves, budget figures don’t tell us much. Taxpayers want to know what we’re buying and whether it’s money well spent. That means adding some basic information to the budget document to show what’s being produced, at what cost, and whether we’re achieving our goals. ​

We’ve proven we can manage our city’s finances well. But right now, unless you’re a professional budget expert, a seasoned journalist, or an aficionado, our lack of transparency discourages public participation.

We should be giving residents the open government they deserve, because the budget affects every single New Yorker. That means we must take the next step and open the discussion up to everyone, so that communities across the city can help decide the kind of city we want to be down the road.

As for that $4.9 million...it is currently not in next year’s budget. The funds were added this year by the City Council to provide emergency food to 180 pantries and soup kitchens citywide, and to help expand access to healthy foods at farmer’s markets and elsewhere. The Council and the Mayor will decide whether to add the funds again for next year’s budget.

Because, after all, budgets are about priorities.