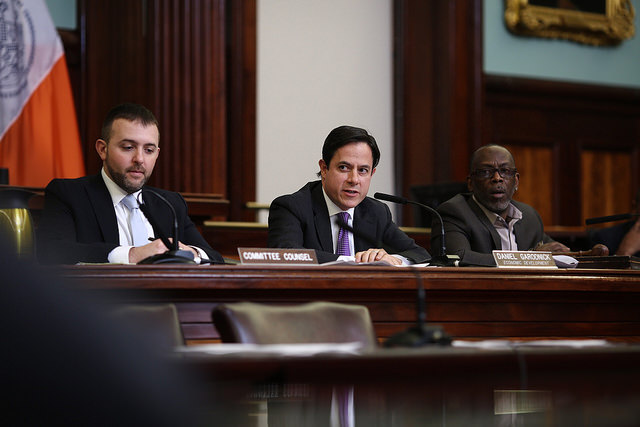 For decades, the New York City Police Department has had an early intervention system to identify officers prone to violence, based on their discipline and complaint history. Yet through leaks last month, we learned that the officers who killed Eric Garner and Ramarley Graham had extensive records of complaints against them. Despite so many documented problems, the officers remained in a position to harm the very people they were sworn to protect. In these cases, the early intervention system did not do its job.

We must do better and hold the NYPD more accountable for ensuring that its officers and the public are receiving all the benefits of a robust early intervention system. Several city agencies, from the Law Department to the Civilian Complaint Review Board (CCRB), oversee the NYPD to some extent. Each of them should have complete access to the information that exists on police misconduct -- but today they do not. Officers with unusually high rates of alleged misconduct should be well known not only to the police department but also to all the entities that do oversight.

To accomplish this, I have written a bill that would require the Police Department, the Law Department, the Comptroller, the CCRB, and the Inspector General for the NYPD to share with each other information regarding civil actions, complaints, and other data points relating to allegations of police misconduct by officers.

Such information-sharing is key. In the absence of reliable and consistent access to this information, these oversight entities cannot properly discharge their responsibilities. Ultimately, an early intervention system that fails to intervene is not much of a system at all.

And we desperately need that system to work. Studies have found that a very small percentage of officers are responsible for the overwhelming majority of problematic interactions with civilians. Identifying those officers, and correcting their behavior or removing them from interaction with the public, would go a long way to rooting out the problem of excessive use of force by the police.

More eyes on police misconduct will mean greater accountability for the NYPD’s early intervention system. With a better system, we could ensure that the NYPD acts faster to address festering issues, and to protect the public. We would also ensure that our many talented and capable police officers do not have to be partnered with people who are going to put anyone’s life in danger.

We could also save the city a lot of money. In Fiscal Year 2016, New York City paid out $228 million in settling and paying out police misconduct judgments. Effective interventions to remove or retrain the few officers who are responsible for the most problems would reduce the city’s exposure to litigation and consequently reduce the costs associated with police misconduct.

Most importantly, this legislation could prevent tragedy. If a better information sharing system is in place, the NYPD will have to be more responsive to addressing misconduct of officers with histories of complaints. In the tragic case of Eric Garner, the NYPD knew Officer Daniel Pantaleo’s history, but did not take sufficient steps to address the underlying issues. In Pantaleo's previous disciplinary proceedings, the NYPD failed to follow the CCRB's recommendations for punishment. Further, they allowed him to continue to work on the street. If other oversight agencies also knew of the complaints and the recommended consequences, there might have been more pressure on the NYPD to heed these warning signs and work to prevent future incidents.

Mayor de Blasio and Commissioner O’Neill have made significant progress in bridging divides between communities and police. They have an opportunity to continue this progress by supporting this bill, which will be the subject of a public hearing in front of the City Council’s Public Safety Committee on Thursday, a hearing chaired by bill co-sponsor Vanessa Gibson. If we want to better protect civil liberties and to better identify officers that have a history of violence, let’s give all the oversight bodies the tools they need to conduct real analysis. It very well may save lives.

***
Daniel Garodnick has represented the fourth district in the New York City Council since 2006, and chairs the Economic Development Committee. On Twitter @DanGarodnick.