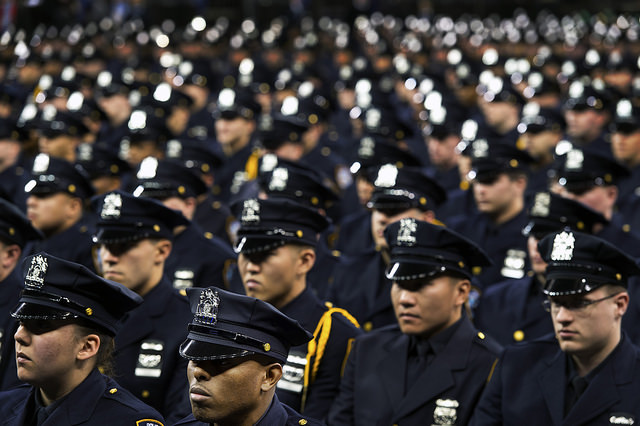 The NYPD released its new body-worn camera policy last week. For the first time ever, the department relied on public opinion to help guide that policy. With help from the Policing Project, a New York-based organization dedicated to bringing the public voice to policing policy, more than 25,000 New Yorkers and 50 community-based organizations gave their input.

Unfortunately, many of those New Yorkers were disappointed to see that their top recommendations were not accepted by the NYPD. But while we sympathize with the desire to see the NYPD adopt more of the public’s views – and while some of our own preferences diverged from the policy adopted by the NYPD – it’s important to recognize that the NYPD’s policy process was an important step in the right direction and offers significant lessons moving forward.

The public was clear in its views on how the cameras should be used.

The NYPD policy did not accept the public’s recommendations on those key issues.

However, it is important to separate out two issues here: the process and the results. Many New Yorkers may not like the results, but the process offers many guideposts for how to do public input correctly.

In general, we don’t really have a system for public input in policing policy. The only place where we have any form of public accountability in policing today is after something has already gone wrong. There, we have inspectors general and grand juries and civilian review boards. Even body cameras themselves are a form of back-end accountability. This system can help ensure that rules are followed, but it says nothing about what the rules should be in the first place.

The NYPD’s process on body camera protocols proves that democratic engagement on the front end of writing policing rules is both possible and desirable. The NYPD made a number of changes to its policy in response to public opinion, including requiring officers to notify members of the public when they are being recorded, and increasing how long it will retain video, from six months to one year.

Even where it did not follow public opinion, the NYPD responded thoughtfully and in great detail.

The Department should be commended for engaging in this effort. It shows that democratic process around policing is possible, and should become the norm.

But what about the fact that the NYPD ultimately did not follow public opinion on some critical issues? That raises hard questions about what form the public voice in policing should take. Here, there are no easy answers. The very idea of the public having any voice in policing rules is so new that we have no clear models for how to proceed.

Elsewhere in government, we have two very different models for obtaining public input into government decisions. Each gives us something in the way of outcomes.

On the other hand, administrative agencies are not required to follow public input, even though they are required to obtain it. Their obligation is to make rational decisions, which includes offering reasons—that later, if necessary, can be evaluated by courts—to support the conclusions they come to. Agencies have to open themselves up to public opinion, and respond to it, but they don’t have to follow it. Agencies just have to have a basis for their decisions in fact, even if the public disagrees. Here, the NYPD acted more like an administrative body.

So, which way of incorporating public voice into policing is appropriate? Each system has its advantages and disadvantages. Neither will make everyone happy. For policing we may need a combination.

This process makes clear that it is better to get public input into policing than to have police departments simply do as they choose without consultation.

This process did not make everyone happy. But it was certainly much better than no process at all.

***
Barry Friedman is the Director and Founder of the Policing Project at NYU Law School. Maria Ponomarenko is the Deputy Director. They recently led the writing of Report to the NYPD Summarizing Public Feedback on its Proposed Body-Worn Camera Policy.