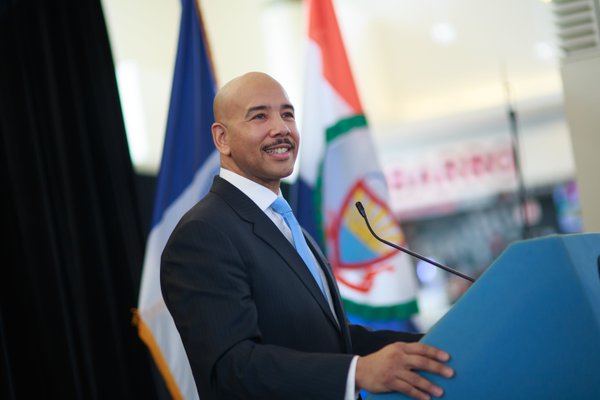 Just last month the annual Somos El Futuro legislative conference took place in Albany. Over 30 years ago a group of Latino elected officials and community leaders initiated the conference as a means to highlight issues important to Latinos and to shine a light on the plight of Latinos in New York. The visionary leadership of these early pioneers was to capitalize on and give consciousness to the ever-growing presence of Latinos in the state. Perhaps the name itself, Somos El Futuro -- We are the Future -- was not only a testament of the current influence of the Latino presence in New York at the time but also an apt moniker of the eventual significance of this surging community.

In a recent column, I highlighted the growing Latino electoral presence in New York City. Latinos now make up almost a quarter of the entire city electorate. Based on sheer numbers Latinos can now claim that they are not just the future but that estamos aqui ahora -- we are here now.

With this increasing presence has come a steady growth in Latino political representation, even though gentrification poses a real threat to some Latino-majority districts. The rise of the Latino presence citywide produced some noteworthy political leaders that in fact became pioneers and leading figures in our community. Among them we can note the work of Tony Mendez, Oscar Garcia Rivera, Herman Badillo, Olga Mendez, Angelo Del Toro, and Jose Rivera (who continues to serve in office).

Without a doubt, these pioneers have paved the way for a newer crop of Latino political leaders, many of whom are doing excellent work in their respective communities. Many are not only providing pivotal leadership in their districts, some have the potential to be serious and credible candidates for citywide office in the near future. It’s important to also note that the extremely important work of providing leadership in Latino areas—communities often riddled with rampant poverty, decrepit housing, and overcrowded schools—is not only being provided by elected officials. In fact, there are a number of Latino community activists, many of them young, fighting ardently for the justice that Latinos demand and deserve.

The last time a Latino gained a top spot on a citywide ballot was Fernando Ferrer in 2005. Prior to that it was Badillo, whose 1977 mayoral candidacy gained the affection of Latinos in New York (he also ran two more times for mayor). It is my belief that for the 2021 elections, Latinos can once again have a Latino (possibly more than one) launching a credible campaign for citywide office. The question is, who might these candidates be that can gain the attention of not only Latinos but also a wider electorate and public? Who will be the next Ferrer or Badillo?

The first that has to be highlighted is Ruben Diaz, Jr., the current Bronx Borough President. Very recently, Diaz, Jr. was a constant name in the ever-present rumor mill regarding a potential challenge to Mayor de Blasio. Diaz, Jr. instead has decided to seek re-election. Over the years, he has taken credit for a boon in Bronx development projects (something which in fact began occurring during Ferrer’s tenure in the borough presidency) and has been a fierce advocate for the people in his borough. While lacking the intellectual heft of a Badillo and Ferrer, Diaz, Jr. has a magnetic personality that is sure to attract many as his final term as borough president nears an end.

There is also Melissa Mark-Viverito, the current speaker of the City Council. Her position has given her the most Latino clout in recent years to influence citywide policy, some of which she has used. This platform has provided Mark-Viverito an ample opportunity to garner broad attention and to push for policy issues pertinent to a wider public and also to Latinos in particular. However, since she is term-limited and likely will be out of the public eye on a consistent basis, her chances for a successful citywide race in four years will be virtually impossible.

One person to keep an eye on is Ritchie Torres, a Bronx City Council member. Elected in 2013, at the youthful age of 25, Torres has proven to be a solid legislator, championing important causes, and also fighting ardently for better housing conditions for public housing residents. Torres is charismatic, well liked by his peers, and whip-smart. He has the uncanny ability to probe and articulate complex policy matters. At 29 years of age, Torres will surely be one to watch for years to come and could be a formidable candidate for either Bronx borough president or the city’s public advocate if he chooses to aspire to either position.

When looking at the horizon of Latino political leaders, the future seems bright -- the three aforementioned names are not the only ones on the list. With the continuing rise of Latinos in the overall population and increased voting participation, it may be quite possible that New York City will soon have its first Latino mayor.

***
Eli Valentin is a Democratic consultant and pastor of the Iglesia Evangelica Bautista in New York City. He is a frequent political analyst on Univision, and has appeared on NY1’s “Inside City Hall.” On Twitter @EliValentinNY.