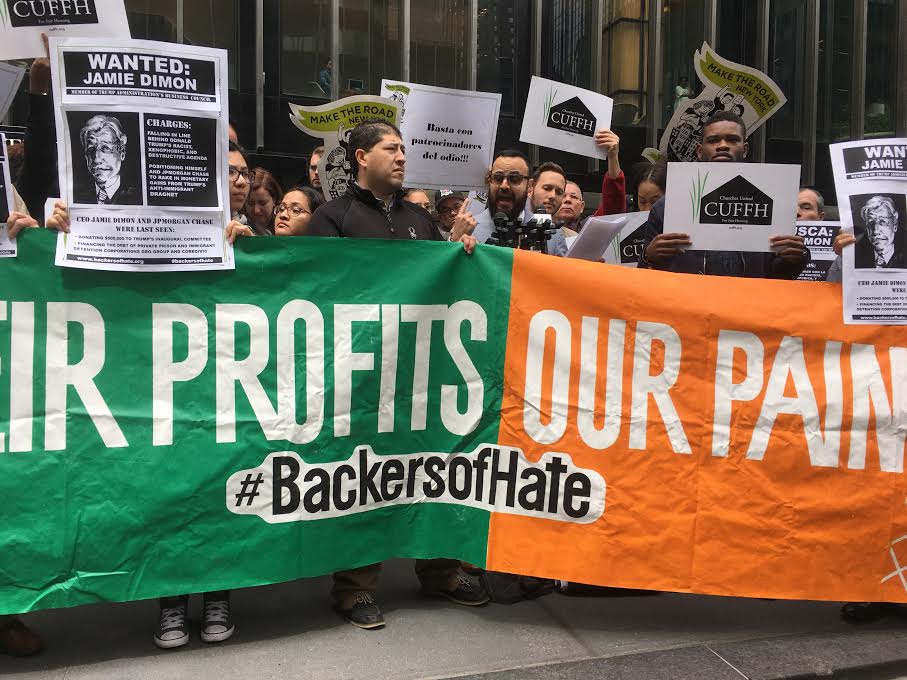 Make the Road New York and the Center for Popular Democracy recently exposed President Trump’s corporate “backers of hate,” companies that stand to profit off an agenda so steeped in hate, prejudice, and greed, you would have to be willfully blind not to see it.

Nothing is more dangerous than business as usual when it is conducted in a moral vacuum, and these companies have been more than happy to go along for the ride: Goldman Sachs, Blackstone, JPMorgan Chase, Wells Fargo, Blackrock, Boeing, IBM, Uber, and Disney all seem eager to cash in on the Trump agenda.

Whether it's financing or investing in the detention centers necessary for Trump’s immigration crackdown, bidding on contracts with Immigrations and Customs Enforcement or Customs and Border Protection, supporting Trump’s campaign and inauguration, or spearheading an anti-worker agenda, the corporations share one commonality: they enable the most destructive and hateful policies of this White House.

Because Trump is great for business when that business is locking up people of color behind bars for petty crimes, and standing to gain from their imprisonment - as it is for JPMorgan Chase. A Trump White House is great for business when you stand to profit from breaking up unions, rolling back workers’ rights, and squeezing more from the middle-class. As for the overwhelming majority of Americans, those living paycheck to paycheck, struggling to afford their kid’s college education, or bracing for the sharp cuts to their health care, they are on the opposite side of that transaction; their pain is another’s profits.

The Backers of Hate campaign urges these corporations to reverse course, until they are no longer accessory to the crimes against the disappearing middle class, against the Muslims targeted by Trump’s travel ban, and to the immigrants living in constant anxiety that today will be the last day they’ll see their family.

And although these companies may not be swayed by the moral argument, they will listen when it comes to their almighty dollar. The Trump resistance must expand to include resisting his enablers. Consumers will need to apply the pressure where they can until condoning the Trump agenda is no longer a profitable business model.

But they don’t need to fight goliath alone.

As the finance capital of the world, New York not only has an obligation to pressure these companies, it has leverage. Our state pension fund is the third largest in the United States, with assets totaling $178.6 billion. In the weeks to come, I will introduce legislation in the state Assembly to divest that pension fund from companies guilty of the most egregious corporate complicity.

New York needs to lead the effort and draw a line in the sand. If you choose to benefit from the broad net Trump has given immigration enforcement agencies, from the deregulation and right-to-work campaigns that will bleed the middle class, or from the environmental degradation that endangers all of our futures, you’ve chosen to build upon a morally dubious house of cards. If New York is to truly stand in resistance to the Trump agenda, it’s time to put its money where its mouth is and disassociate itself from the backers of hate.

***
Francisco P. Moya is a New York State Assemblymember representing the 39th District in Queens and is the prime sponsor of the NYS Liberty Act and the NY DREAM Act. On Twitter @FranciscoPMoya.