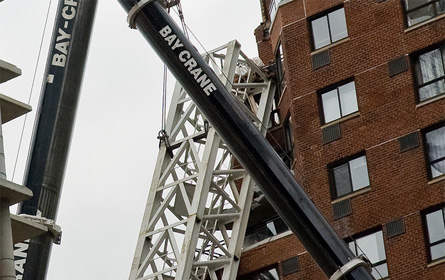 Photo by Jason Kuffer
The Department of Buildings had issued 13 violations for this Manhattan site where a 2008 crane collapse killed seven people.

The tragic deaths this month of two veteran ironworkers at a West 83rd Street construction site were a shocking reminder of how perilous construction work can be in our city. What was not so shocking, unfortunately, was the trail of workplace violations that were issued by the city Department of Buildings at the site after the fatalities -- 11 in all, including eight, Class 1 violations, which are defined by the city as posing a "threat that severely affects life, health, [and] safety." In this case, that included failures to install vertical netting, guard rails and toe boards, all safety features intended to prevent serious falls.

No system of inspections is ever going to prevent every accident. But for too long the city's Department of Buildings has been plagued by bureaucratic inefficiency, allegations of corruption and missed warning signs at fatal construction sites. A big part of this problem, I believe, can be traced to the department's conflicting mission to both promote and police development. On the one hand, its agents are charged with issuing permits to allow new developments; on the other, its inspectors are called upon to issue violations at those same developments when problems arise.

There is a better way. The city should create an independent office of inspections, one that streamlines the inspection process but also removes any tension within the buildings department over its dual role.

This is an idea with broad and deep support. Both the city's business and labor communities have endorsed the concept of an independent inspection office, as did a task force set up by former Mayor Rudolph Giuliani as far back as 2000. And yet the issue remains unresolved, despite a well-documented history of lax -- and sometimes dangerous -- oversight problems.

City Hall's announcement this week that building permits would now include bar codes -- allowing residents to use smart phones to access information already available online-- is a welcome advance. But it falls well short of the major reform that is needed at the buildings department.

A History of Deadly Problems

The untimely deaths of veteran steelworkers Brett McEnroe, 49, and Roy Powell, 51, at the West 83rd Street site last week are only the latest examples. On March 15, 2008, a crane collapsed at a construction site in East Midtown, killing seven people; the Department of Buildings had issued 13 violations for this site. Two months later, a crane toppled over on the Upper East Side, killing two people at a site with 14 violations.

The common denominator in all these accidents was a lengthy backlog of open buildings department and Environmental Control Board violations, as well as a flurry of new ones issued in the wake of disaster.

A later report by my office found tens of thousands of Manhattan buildings to have serious safety or structural violations, including many schools and hospitals. The report also examined long-standing complaints about the erratic training of building department inspectors, as well as the antiquated system of hand-written violation records the agency still uses.

Taking Advantage of the Slump

It is time to reform the buildings department, and the time to do it is now, while the issuance of new building permits is down some 80 percent since 2006 as a result of the still-stalled economy. We must act now so that when good times do return -- as they always do in New York -- we will be ready with a modernized, streamlined Department of Buildings.

We need to establish an independent inspection office. We need to properly train our inspectors. And we need to arm them with handheld computers -- already used by other agencies -- so that information about violations can be swiftly relayed to other inspectors and property owners.

We know the next building boom is coming -- the New York Building Congress counted 692 "stalled" building sites in the five boroughs last October, many of them just waiting for the economy to turn the corner. Together, these projects represent hundreds of millions of dollars of unrealized investment -- and thousands of good paying construction jobs.

New York's building stock is the backbone of our urban infrastructure and is no less important than the roads and railways that keep us all connected. Failing to properly regulate its growth and safety is a risk we can no longer afford.