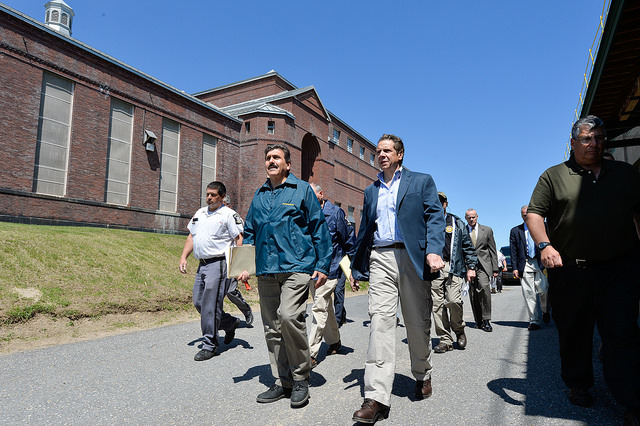 In much the same way that the movement to end stop-and-frisk policing eventually became a rallying cry for political hopefuls, so, too, has the appeal to close the Rikers Island jail complex now become de rigueur among New York City elected officials. Where though is the corresponding clarion call to close Attica, Sing Sing, or any number of New York State’s brutal and obsolete prisons?

The #CLOSErikers campaign highlighted some ugly and undeniable truths about Rikers Island: intractable violence and corruption, heavy financial cost to the taxpayer, an antiquated and dangerous physical plant, and an overwhelming and disproportionate percentage of black and brown prisoners. The movement also emphasized the impact of money; nearly three-quarters of Rikers inmates are there because they can’t afford bail, often in amounts of $2,000 or less. All told, the 2017 New York City Department of Corrections budget was $1.4 billion.

Most of those same truths apply with even greater force to New York’s patchwork of state prisons that hold five times the number of people at Rikers.

There is abundant evidence of violence and corruption in New York’s prisons. In just the past few years, there has been documented abuse, including homicides at the hands of prison guards, at numerous prisons across the state. The prevalence of brutality compelled the United States Attorney’s office last year to charge five former corrections officers with federal civil rights violations, with then US Attorney Preet Bharara stating that “[E]xcessive use of force in prisons . . . has reached crisis proportions in New York State.”

The state prison budget is astronomical. From 1999-2015, the budget expanded to almost $3 billion even as the number of incarcerated people dropped. For fiscal year 2017-18, the Department of Corrections budget request was $3,276,000,000, a figure that does not include the nearly $10 million in settlements doled out by the state for excessive force and abuse lawsuits in the past few years.

And while Rikers Island is an aging facility, it is almost luxurious in comparison to some New York state prisons that date back to the 19th century. These archaic institutions struggle to provide adequate heat in the winter and to cool down in the summer. One can only guess about the layers of asbestos and other environmental hazards that afflict prisoners, guards and civilian employees alike.

The racial disparities so evident at Rikers Island are reflected as well in the state prisons as blacks and Latinos make up 73 percent of the prison population, nearly double their numbers in the state general population. And with 84 percent of the guards being white and from upstate communities, state prisons readily conjure up images of the plantation with white overseers. In contrast, blacks and Latinos comprise 84 percent of the uniformed corrections officers at Rikers Island.

Visits to Rikers Island in the East River across from LaGuardia airport are notoriously hard, time-consuming and humiliating, but visits to state prisons add another layer of torment -- New York’s state prisons house about 52,000 people in a labyrinth of 54 prisons ensconced primarily in remote corners of the state. The majority of state prisoners are New York City residents and yet they are scattered in prisons as far away as the Canadian border. The impact on the individual prisoner is devastating as visits are almost necessarily infrequent and families and communities are destroyed in the process.

Unlike so many at Rikers, state prisoners are not incarcerated because they are too poor to post bail. Nevertheless, a countless number also need not be incarcerated. Although the prison population has decreased from 72,000 almost twenty years ago to 52,000 today, the question still remains whether all those many people should be behind bars. It certainly bears noting that New York State, with such progressive social policies in many areas, remains out of step with regard to national trends in incarceration. According to The Sentencing Project, New York is one of only eight states where the proportion of prisoners serving life or “virtual life” (fifty years or more) sentences is at least one in five. Almost 10,000 people in New York prisons are serving life sentences or its functional equivalent, a number topped only in Texas, Louisiana, Florida and California. This vast number of potential death-in-prison sentences is astonishing, unjustifiable and unnecessary.

Thousands of New York prisoners have served their time, often several decades, remarkably. Many are elderly and in failing health. There are countless stories of transformation, redemption, and profound change. Yet these men and women languish in prison for no reason other than to satisfy a seemingly unquenchable thirst for interminable punishment.

New York City Mayor Bill de Blasio maintains that the population at Rikers must be reduced before it can be closed within ten years. Should New York Governor Andrew Cuomo feel a corresponding need to shrink the prison population before shuttering some of New York’s most notorious penitentiaries, he already has at his disposal the means to do so – reform the parole process and meaningfully administer clemency.

Last December, the New York Times exposed a dysfunctional and punitive New York State Parole Board: “Commissioners — as board members are called — often read through files to prepare for the next interview as the inmate speaks. The whole process is run like an assembly line. They hear cases just two days a week and see as many as 80 inmates in that time.” Governor Cuomo recently appointed six new commissioners to the Board but vacancies remain. The governor should fill those seats expeditiously with people who more closely reflect the identities and experiences of those in prison and who bring diverse professional backgrounds to bear. These new board members can transform the board by taking a forward looking approach that examines evidence-based risk assessment scores and the individual’s institutional record, as opposed to looking backward and focusing exclusively on the crime of conviction, the one factor the individual can never change.

The discretionary power of the executive to grant clemency is longstanding and deep-rooted. The Constitution expressly vests the President with the “power to grant reprieves and pardons” and most states grant similar power to the governor. In October 2015, Governor Cuomo announced a bold and unprecedented pro bono clemency project in an apparent response to criticism about the few clemency applications he had granted in all his years in office. While the creation of the project is laudable, to date, the number of people granted clemency remains infinitesimal even as there are many prime candidates by every measure.

The Independent Commission on New York City Criminal Justice and Incarceration Reform referred to Rikers Island as a “stain on our great city.” Attica, Southport, Mid-State, Clinton, Fishkill and other state prisons are similar blights on New York State. Perhaps former Governor Mario Cuomo’s ugliest legacy is the growth of New York’s prison industrial complex, as more prisons were built during his tenure than that of all other New York governors combined. His son, Andrew, pledged to church congregants in Harlem to “go down in the history books as the Governor who closed the most prisons in the history of the State of New York.” Godspeed.