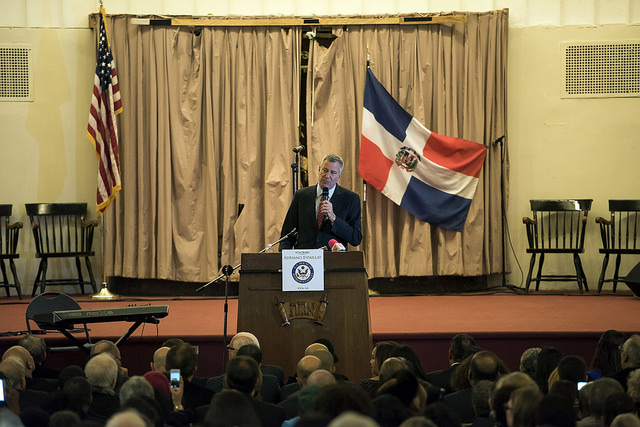 In 2013 I met then-Mayoral candidate Bill de Blasio at a campaign event in midtown. I talked with him about my housing situation, that I had been laid off at work and the rent for my apartment had become too expensive. He said if he was elected, he would do what he could to help people like me. I voted for him.

Soon after our conversation, I lost my apartment. Three years later, I am still homeless. The promises de Blasio made to me seem far away, and now, I’m not sure he is still on our side.  Recently he openly criticized panhandlers and questioned whether we are poor enough to ask for money. He’s even said that panhandling “contributes to a decline in quality of life of New Yorkers.” I am a New Yorker - what about my quality of life?

While some things have changed since Mayor de Blasio took office, many others have remained largely the same.  Just last week the Mayor published an op-ed about his affordable housing plan. He announced that under his leadership, city government has constructed or preserved nearly 78,000 units of affordable housing, but our homeless population is still hovering around record highs of 60,000-plus.

New buildings are popping up in neighborhoods all over the city and our mayor is celebrating a successful affordable housing plan. So my question for him is, affordable for whom? Most of the units in his plan are for people whose income is much higher than mine, and not enough of it is set aside for homeless people. For me — and the tens of thousands of people like me — the numbers just don’t add up.

Clearly there is not enough housing being prioritized for homeless New Yorkers. And, even the systems that are supposed to help us get housed are full of problems. For the last six months I’ve had the Living in Communities (LINC) rental assistance program – a de Blasio program. If I found a place to live, I could potentially pay the rent with this voucher.

So why am I still homeless? Because landlords across the city are discriminating based on source of income. Landlords and brokers blatantly respond with “no programs,” or “no LINC,” when asked about potential apartments. This is flat-out illegal! While homeless people are getting arrested for jumping turnstiles, landlords are getting away with discrimination against poor people and they’re leaving us out on the street. What good is my LINC voucher if no landlord accepts it?

Everyone -- from city officials to service providers to homeless people -- knows that the subsidies are not keeping up with skyrocketing rents around the city, and the few places that are affordable are often found far away from people’s communities and support networks.

On top of broken rental assistance programs, the city continues to give away public resources that could house more homeless people. Over and over again, we hear about vacant lots, parking lots, or armories being given away to for-profit developers who get city subsidies to build luxury condos and market rate apartments that are often too expensive for the very community members who live there. Public land should be used for public good.

Mayor de Blasio may call me a “skeptic” or a “naysayer,” but before I applaud his housing plan that he says is for everyone, I need to see that homeless New Yorkers are truly included in it.

For the homeless, the solutions are simple: we need the city to make more housing available to us, we need systems in place to help us easily access this housing, we need the city to target bad actors who refuse to rent to homeless people, and we need the city to stop giving away valuable resources to developers who are more concerned about their profits than they are about our communities.

I am homeless not because it is “fun,” but because real estate profits have been put before my needs over and over again.

***
Ruby Carrasquillo is a member of VOCAL-NY, a grassroots organization that builds power among low-income people impacted by homelessness, HIV/AIDS, drug use, and mass incarceration. On Twitter @VOCALNewYork.