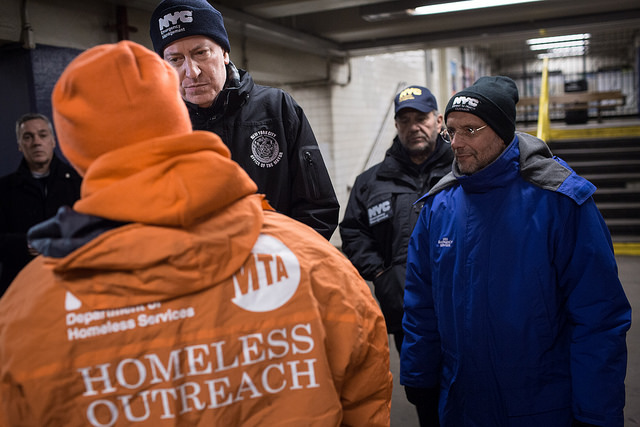 According to data from the Mayor’s Management Report, single homeless adults are increasingly bottlenecking in city shelters, and when they are housed, they too often return to shelter within a year. Since fiscal year 1999 (FY99), a single homeless adult’s shelter stay has more than tripled from 108 days to 355 days in fiscal year 2016. Also, since fiscal year 2001, nearly one in five adults -- 17.2 percent in FY01 to 18.9 percent in FY16 - return to shelter within a year of permanent housing placement.

This indicates a lack of permanent housing exit options as well as homeless adults struggling to maintain tenancy once housed. To some extent, better exit options and sustained tenancies are on the horizon. Over the next 15 years, New York State and City will create 35,000 units of much needed supportive housing. This alone will not address these persistent issues though. Not all homeless adults will need supportive housing or be eligible.

One place to look for guidance is the United Kingdom. They share similarities regarding causes of homelessness including inadequate welfare housing benefits, rent increases outpacing wage growth, and a diminishing supply of public or social housing. Individuals in both countries also encounter similar barriers to renting. These include unstable rental histories, unaffordable rent and a lack of affordable housing as well as landlord imposed barriers -- refusal to rent to those enrolled in a government program, charging increased access costs to rent, and biases about renting to the homeless.

Based on my learning, I have four recommendations for City homelessness regarding exit options and tenancy sustainment.

1) Offer Tenancy Support to Those in Shelters, Alternatives to Shelters and Supportive Housing
Crisis addresses landlord barriers to renting by working directly with the homeless on landlord concerns before and during tenancy. This helps prepare individuals to live on their own and maintain a tenancy. As Crisis’ Private Renting Program Manager Bridget Young stated, “What’s good for the tenant is good for the landlord.”

At Crisis, potential members attend a housing induction to acquaint them with housing services. This two-hour group session covers topics such as an individual’s housing priorities and compromises. For example, one man came into the group set on living in a certain London borough but left understanding he would need to be flexible in his housing search. I was impressed with the early candid conversations such as these to acquaint individuals with the realities of the tight London rental market and the need to adjust housing expectations. After induction, members attend a Mini Renting Ready workshop. This addresses how to search for housing, the type of housing to search for and the rent one can afford. After that, members work with a housing coach and attend a property searching club. Crisis staff also support tenants during tenancy. This can include offering an accredited “Renting Ready” course with topics such as housing rights, money management and communicating with roommates and landlords, or it may involve aftercare from housing coaches for up to 12 months after moving in.

Tenancy training enhances exit options and tenancy sustainment. It facilitates an individual’s transition to housing, helping address barriers that prevent them from moving into a home and maintaining it. According to staff at Crisis and other UK housing and support agencies, landlords appreciate tenancy training and are more inclined to offer tenancies to someone who has engaged in it. Tenancy training also addresses the informational inequities among those unstably housed, equipping them with information they lack such as their housing rights. A more informed tenant would know about grounds for eviction and about their right to counsel in housing court, and thus contest an eviction instead of entering shelter.

New York City should offer tenancy training to those in the homeless services system and supportive housing. Similar to Crisis’ work, it could include early conversations with those individuals about housing as well as housing education. It may be particularly useful for those most estranged from housing - chronically homeless adults and those exiting the criminal justice system - as well as those lacking housing experience such as homeless youth and those exiting foster care. The city could pilot a program involving these groups, assessing its impact by tracking tenancy length and return to permanent housing.

2) Match Individuals in Transitional Housing as Roommates Prior to Moving into Shared Permanent Housing, and Provide Shared Housing Support
Another type of tenancy support is roommate matching. This consists of matching individuals in transitional housing with their shared permanent housing roommate prior to moving, and supporting sharers before and during shared housing. An example is Scottish provider Trust in Fife’s Tenancy Share, a transitional housing program helping those under the age of 35 to move into shared housing. Before sharers move, they’re matched with their roommates via a matching assessment, discussions and meetings. Fife transitional housing staff also support sharers before, during and after they move.

Matching attempts to improve shared rental housing, which is a byproduct of the unaffordable housing market for homeless single adults. It prepares individuals so they are not blindly moving into living with strangers. It also gives tenants a support system during and after their transition. This enhances tenancy sustainment. From 2013-16, Tenancy Share created 45 shared tenancies with a six-month tenancy sustainment rate of 90 percent.

New York City should implement a pilot akin to Tenancy Share in which drop-in centers, Safe Haven or shelter providers would match shared housing roommates as well as provide support during the transition to and tenancy in shared housing. Those ripe for a pilot are youth aging out of foster care and homeless youth in drop-in centers or shelters. Matching would provide these individuals with support, particularly valuable given their diminished support systems. The housing itself would equip them with independent living skills and build rental histories.

3) Develop a Housing Pilot Program for Single Adults Exiting Transitional Housing in Need of Tenancy Support
Crisis also works to strengthen the private rental sector as a viable housing option for the homeless by funding and advising Help-to-Rent projects. Help-to-Rents support tenants and landlords during tenancy. An example is Trust in Fife’s Fife Keyfund. Fife negotiates a one-month written guarantee, instead of a cash deposit, with the landlord, who may claim it in case of property damage. Their staff maintain regular contact with tenants, visiting them and working with them to save towards the deposit. They also serve as a point of contact for landlords to resolve tenancy issues.

Tenants in Help-to-Rents sustain their tenancies. From 2014-15, Fife Keyfund created 318 tenancies with an 85 percent tenancy sustainment rate. Help-to-Rents also entice landlords to rent to those homeless, even at lower rents. Fife staff stated that landlords buy into their housing program because they know Fife provides support. According to Stephen Green, the Board Chair of the UK housing and support provider Nomad Opening Doors , even when landlords leave for the commercial market, they return as they find it easier to rent to Help-to-Rents.

New York City should develop a housing pilot for single adults in transitional housing exiting to permanent housing in need of tenancy support. It could be modeled after Fife Keyfund and the city’s scattered-site housing program. The pilot for adults with more stable rental histories would mirror Fife Keyfund where the temporary housing provider negotiates a lease for the client. The pilot for those with unstable rental histories would mirror the city’s scattered-site housing with the transitional housing provider renting units from private rental sector landlords and subletting them to clients. Ideally, after the first year, the individual would enter into a lease with the landlord instead of subletting. For each pilot, the transitional housing provider would be the named contact for the landlord to address tenancy issues. Keeping the housing provider as the service contact provides continuity for the tenant and ensures the landlord has contact with staff most familiar with the individual’s housing.

4) Advocates and Electeds Should Engage Landlords in Homeless Advocacy
Crisis recognizes its common interest with landlords in resolving homelessness issues and engages them in policy recommendations and campaigns to address issues. An example is its work to improve homelessness prevention for single adults. Prior to the UK Parliament’s passage of the Homeless Reduction Act earlier this year, local authorities often reneged on their duty to advise and assist adults coming to them with an eviction notice. Crisis recommended statutorily obligating authorities to assist individuals earlier in the process. This would prevent evictions and address landlord concerns about authorities returning tenants to their property without assistance until bailiffs evict them. Crisis then engaged landlords in advocacy to adopt the recommendations. It reached out to landlord associations and membership groups. It also invited landlords to lobby Parliament by signing an online petition and directly speaking with Members of Parliament.

Encouragingly, New York City’s largest landlord group, the Rent Stabilization Association, has endorsed the Home Stability Support bill proposed by Assemblymember Andrew Hevesi to create a state subsidy to supplement the shelter allowance. Advocates and elected officials should capitalize on this and use the opportunity to bring other landlords and State legislators on board. Ending homelessness requires various sectors working together.