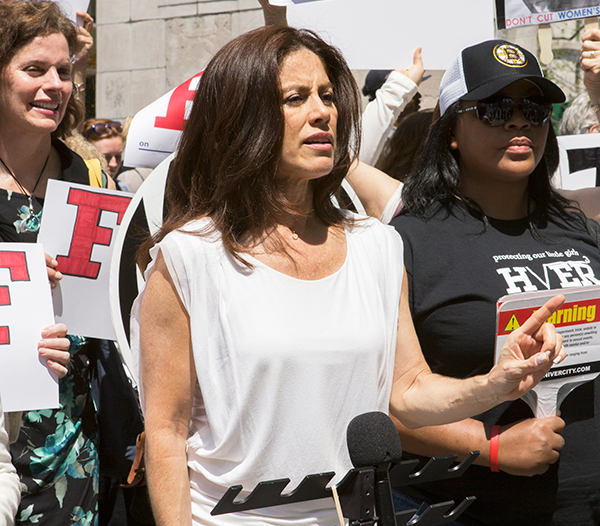 Sonia Ossorio, the author, is president of National Organization of Women – New York

Across the country, women are working to reclaim their power on the front lines of the resistance against the misogyny and xenophobia of the Trump administration. Yet when women decide to run for office themselves, they continue to face significant barriers — and in one local City Council race — those barriers have become starkly clear.

In the Bronx, Amanda Farias is running to represent District 18, which includes the neighborhoods of Soundview, Castle Hill, Parkchester, Clason Point and Harding Park. Born and raised in the Bronx, Amanda has made a career of serving her community. She brings extensive political experience running the City Council’s Women’s Caucus, working for Council Member Elizabeth Crowley, and leading participatory budgeting efforts for Council District 30. Amanda is exactly the kind of qualified, experienced and committed candidate we should be working to elevate and support.

But the Bronx County Democrats decided instead to back a candidate—Ruben Diaz Sr.— who fails to support the basic tenets of the Democratic Party and human rights, who seeks to put a woman’s decisions about her body into the hands of government, and who has demonstrated contempt for the LGBTQ community.

To add insult to injury, the Bronx County Democrats are trying to build roadblocks to prevent Amanda Farias from even getting on the ballot, leaving Bronx voters with fewer options. There’s nothing democratic about that.

Amanda gathered over six times the number of signatures required to be placed on the ballot, a testament to the desire of residents of the Bronx to see more qualified candidates run for office. Instead of embracing the opportunity for new voices, the Bronx County Democrats challenged the validity of her petitions. This cynical move makes their intentions all too clear: the Bronx County Democrats don’t just want their candidate to win. They want to prevent Amanda from even running. They don’t care if you have choices.

As the nation faces an onslaught of hate and bigotry across the country, the Bronx County Democrats’ petition challenge is especially chilling. In a time when the leader of our country dismissed bragging about sexual assault as “locker room talk,” when leaders of the current administration have threatened to defund the Violence Against Women Act (VAWA), and access to women’s healthcare is diminished, it is more important than ever to support strong, progressive leaders like Amanda Farias at the local level. And before we can even elect women, we need to make sure they get on the ballot.

There are currently only 13 women serving in the 51-seat City Council. Five are set to leave at the end of the year (four due to term limits)—all of whom are women of color. Unless we empower and support women to run and fill these seats, women’s representation in the Council will drop to an abysmal 16 percent.

No matter who is elected this fall to replace the departing Council members, one thing is clear. If we want to elect women, then we must be more proactive about giving women a platform. This isn’t just a Bronx problem—it’s a systemic issue for women who aspire to leadership positions from the corporate boardroom to national political office. But to change this culture and give women a path to the top, we must start locally.

This means cultivating women leaders from the start, organizing activist nights and holding events to create a network that amplifies women’s voices, similar to the work we do at the National Organization for Women – New York. This means being deliberate in recruiting women and diverse voices on community boards, by investing in campaigns early on, by not making women the last token choice when an opening comes up, and at the very least by not purposefully blocking the democratic process when women do pursue opportunities.

At the end of the day, voters should have more choices, not fewer, if we are going to move this country and this city forward. And it can and should start here in the Bronx.

***
Sonia Ossorio is President of the National Organization for Women – New York. On Twitter @NOW_NYC.