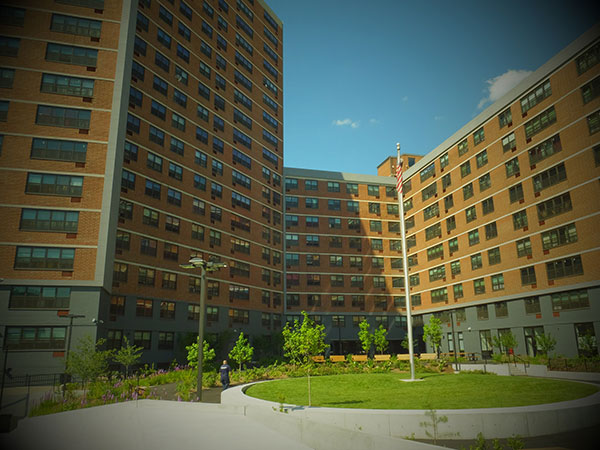 Why on earth would private companies be interested in renovating and running public housing in New York? From the headlines about conditions and crime, and deferred maintenance in the billions, it is hard to imagine why private interests would want to touch a NYCHA housing project. Yet the conversion to private management is well underway and NYCHA has proposed the conversion of thousands of additional units to Section 8/private management. Two articles consider strategies underway for both small and large projects visited during 2016-2017. The following is the first of the two, with the second to be published on Friday, September 29.

In the heart of the Bronx’s Melrose district, known for its successful program of affordable housing, an experiment crucial to the future of New York City is underway. The New York City Housing Authority (NYCHA), private developers, and designers have remodeled a public housing tower block, Bronxchester Houses, for another generation of deeply subsidized living. By embracing high-rises, rather than demolishing towers, the city is swimming against the national tide of public housing destruction. With so many New York City residents in NYCHA housing developments (at least 400,000 people), and so much of that high-rise housing decaying, the outcome of the experiment matters more than ever.

Bronxchester Houses in the South Bronx, with 208 apartments, is representative of the design strategy for six small sites, with 875 apartments total, recently transitioned into a public-private partnership. At Campos I, another of the six, a similar strategy is in the process of implementation.

Bronxchester, Campos I, and the other sites had been managed by NYCHA for decades, even though they were always Section 8 funded projects that normally would have been managed by the private sector. Following a 2013 request for proposals, NYCHA entered into a long-term agreement with Triborough Partners, the development team of L&M Development Partners (a well-known affordable housing developer and manager in the city) with Preservation Development Partners, that put the private developers in charge of rehabilitating and maintaining buildings on the six NYCHA sites in Manhattan, Brooklyn, and the Bronx. The renovation was financed through a combination of public and private financing including tax-exempt city bonds.

Armed with a relatively robust budget for a small project, and freed from many NYCHA and federal public housing guidelines and rules, the development team and the designers rethought the Bronxchester project from the ground up.

The architecture and branding firm GDS led a design intervention big enough that Bronxchester now looks more like private affordable or even market-rate housing than it does a typical NYCHA tower. GDS designed giant gray frames, made of Ecotone-panels, that were applied around the edges of the buildings’ façades. Intended to bring down the scale of buildings, the frames stop two floors above ground level, with bases of the buildings painted gray. The renovation also provided larger windows for ground-floor community spaces.

GDS principal Michael Kirschmann told us that while “people dismiss affordable housing as not cool...there are a lot of opportunities to be thoughtful.” Indeed, the Bronxchester building looks different, and better, both close-up and far away. The building’s new contemporary look complements its neighbor, the well-known below-market housing development Via Verde, designed by Dattner Architects and Grimshaw Architects and built in 2012. Bronxchester’s exterior renovations, it should be noted, are subject to much more strict fire codes than London had in place before the tragic Grenfell fire.

At Bronxchester, the rebranding strategy continues inside. OCV, the architect of record for the projects, designed straightforward interior renovations that aim to generate a pride of place and “market” feeling for buildings typically outfitted with standard-issue NYCHA furnishings, long in need of repair. New kitchens and bathrooms, along with integrated heating-cooling window units, were installed in all apartments. New flooring, paint, tile, and lighting brightened up hallways.

The tenants are also benefitting from bright, ground floor laundry rooms, glass-enclosed lobbies, and spruced up community spaces for meetings and parties. New elevators and roofs were installed to address essential quality of life issues.

The strategies make the most of good looking off-the-shelf products (light fixtures, vinyl tile, ceramic tile) typical in hotels and market apartment buildings that NYCHA has usually avoided because of their lack of durability. The private managers simply intend to replace these elements as they are damaged, factoring these replacement costs into operating expenses. The strategy opens up a much wider range of possible design solutions.

The most striking aspect of the renovation is the transformed courtyard. Landscape architect Joanna Pertz wanted the site’s open spaces to feel “safe but free.” Her first instinct at Bronxchester was to make the site as open as possible to the adjacent neighborhood. After residents told her they wanted a defined semi-private space, she created a final design that “hardens the edge, and opens up the center.”

Her landscapes, most of which are for residents and their guests only, are designed with zones for different age groups. She imagines, for instance, preteens sitting and drawing on the amphitheater steps, teenagers playing basketball at the new full-sized court, and seniors watching the action from afar, in an area protected by trees. Where there was once 7,000 square feet of play space at Bronxchester, there is now a 24,000 square foot courtyard.

Many of the architectural decisions address security rather than looks. At Bronxchester, for instance, management gated the interior spaces described above, which were previously open to the street, and increased exterior lighting, particularly at entry and gathering spaces. Tenants now use key fobs to access the buildings and private outdoor areas. Increased funding for operations allows private security staff to be on site at the entrance for nearly all hours of the day, including most of the night. Cameras also keep an eye on interior and exterior spaces. Gating reduced community access, but the enhanced tenants’ sense of safety and new renovations make the ground plan more intensively used by residents and their guests.

Tenant leaders have seen a difference since security was increased. Patricia Lamonda, Tenant Association President at Bronxchester Houses, said, “Seniors are sitting outside and getting fresh air. Now that we have security, tenants don’t have to watch drug dealers coming into their building and trying to sell. The problem is the people who are not on the leases.”

There is still some ground-level space accessible to the general public, but it is better designed than before. Neighbors and residents now mingle in the unsecured areas in front of the building. These public areas, in fact, were also redesigned with better seating, lighting, and landscaping. They are also observable from security, making them more attractive to most tenants. Bronxchester, and other sites like Campos Plaza I, have also benefitted from surrounding neighborhood investments, both public and private, that have contributed to public safety and neighborhood livability. 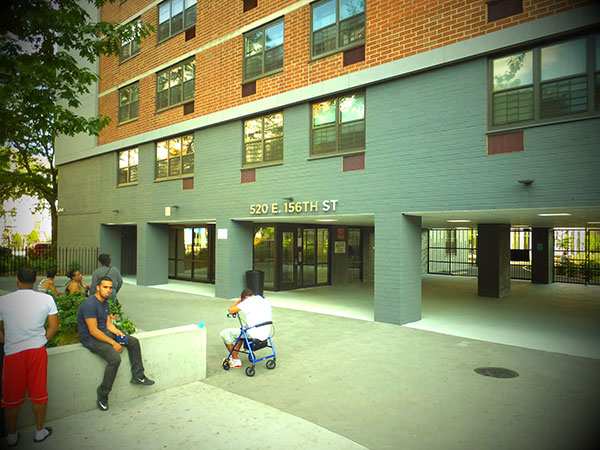 Bronxchester is now managed by C+C Apartment Management, L+M Development Partner’s management subsidiary, which has increased on-site maintenance and management staff at all sites. The small NYCHA staff that was on site before the renovations was relocated to other sites. New, responsive management contrasts with what tenant leaders characterize as NYCHA’s “band-aid approach.”

With C+C now in charge of operations, tenant leaders describe living with the same regulations as they did under NYCHA, but with greater enforcement. While manager and tenants alike feel the new management has improved tenants’ lives, C+C has also helped to restore tenant faith so that rent can be regularly collected.

Triborough and C+C must still comply with applicable Section 8 and LIHTC rental management regulations under the terms of their 25-year contract. Tenant rents, as a result, have not increased and will remain at their current (low) levels. L+M also gave payment plans to tenants who owed back rent payments. In interviews, the private managers made clear that rent collection is a priority.

While the improvements at Bronxchester are encouraging, the long-term impacts of the public-private agreement are unknown for resident families, especially given the current federal administration. The same type of vigilance housing advocates apply to NYCHA will probably need to be applied to the private managers in the long term.

Early successes at renovated NYCHA sites like Bronxchester come not from one strategy, but from a combination of architectural upgrades, improved management, and expanded security, all made possible by the increased subsidies opened up through the Triborough public-private agreement.

The tenants we spoke with were all thrilled finally to have well-maintained apartments and common spaces, responsive management, and safe, well-designed outdoor spaces, all without having their rents increased. Bronxchester shows what is possible with increased investment for housing rehabs and room for design experimentation. It also gives the chance to evaluate existing regulations. With NYCHA’s 334 developments, holding 2,602 buildings, many of them in disrepair, hundreds of thousands of residents across NYCHA properties could benefit from improved conditions and better designs, as Bronxchester residents have.

Read part two of this series: With Federal Help, A Big Project Reset Shows the Way at NYCHA

***
Nicholas Dagen Bloom is an associate professor at the New York Institute of Technology and author of "Public Housing That Worked." Karen Kubey is an Architectural and Housing Consultant at karenkubey.net.