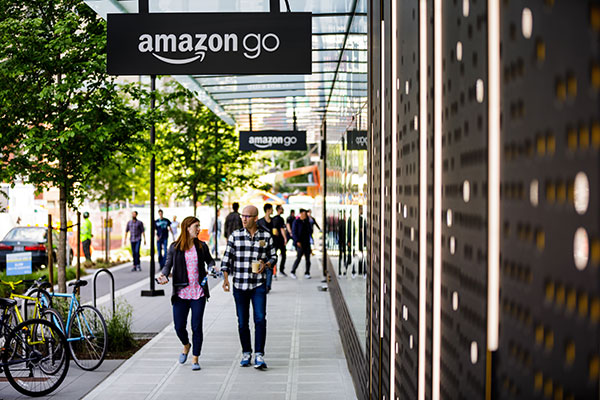 Bids are due today for Amazon’s new headquarters and it seems cities across North America have joined the fray. The suitors are lining up with billion-dollar bouquets, and with good reason. What mayor could resist the promise of 50,000 well-paying jobs and all the economic energy that comes with the headquarters—a massive boost to the tax base, new cafes and food trucks, spin-off companies, and a legion of happy vendors? New York City alone has nearly two dozen neighborhoods vying for Bezos’ bounty.

Pundits have frequently written off the five boroughs as Amazon’s second home because of the exorbitant cost of living. Some are pointing to the subway meltdown. Yet an even greater obstacle may be the city’s underprepared workforce.

While New York has always been a beacon for titans of industry, striving immigrants, and the creative cognoscenti, for too long, the city has failed to develop enough local talent into the kind of smart, savvy employment base a modern company like Amazon demands. Just 36 percent of New York City residents have a bachelor’s degree or higher, according to the latest Census data, compared to 45 percent in Denver, 46 percent in Austin, and 55 percent in Washington, D.C. In Amazon’s current home base of Seattle, it is a whopping 59 percent.

New York’s ability to lure the world’s fourth largest corporation, or even its 40th or 400th, will hinge on whether its workforce is primed and ready. By that measure, the city has a long way to go.

More than 3.3 million city residents over age 25 lack an associate’s degree or higher level of college attainment. Residents with a bachelor’s degree or higher are largely concentrated in Manhattan, where the attainment rate stands at 62 percent, followed by just over 30 percent in Brooklyn, Queens, and Staten Island. In the Bronx, it is a distressing 18 percent.

Amazon should still see boundless potential on the Hudson. New York boasts a booming and entrepreneurial tech sector with more than 115,000 jobs today, an unparalleled smorgasbord of arts and culture, and the brand new Cornell Tech campus, alongside other world-renowned educational institutions.

But if New York succeeds in attracting Amazon, or any large company for that matter, whether GE, Aetna, or Tesla, it will be in spite of the city’s education and training systems, not because of them. New York can do so much more to ensure that its residents can access the opportunities that an Amazon would bring, while offering employers a much larger pool of homegrown talent.

Yes, New York is full of tech talent today. This is true, in part, because the city has become increasingly successful at attracting engineering and computer science graduates from Stanford, Carnegie Mellon, and other top universities around the world. But in an economy where technically skilled workers are prized—not just on Silicon Alley but in nearly every large and mid-sized company—demand is through the roof. New York needs a much bigger pipeline, not just for Amazon, but for blue chip companies and local start-ups alike.

Even if the vast majority of Amazon’s 50,000 new hires were imported from other places, New York would still be better off with them here than in Denver or Chicago or Atlanta. But no company—and certainly not a company with so many hiring needs—is going to make locational decisions that are completely dependent on bringing in outside talent. It is simply not realistic, or sustainable. Meanwhile, if half those workers or more were born, raised, and educated in New York, the benefits would be far broader—allaying the fears of those who see Amazon as more of an economic development trophy than an opportunity generator.

Such an achievement today would be almost impossible.

While New York City has done an increasingly impressive job of getting students through high school, it continues to struggle with college success, leaving students without the credentials an employer like Amazon demands. Today, fewer than half of all four-year college students at the City University of New York (CUNY) graduate with a degree in six years. Just 22 percent of CUNY’s community college students earn a degree in three years.

CUNY’s highly successful ASAP initiative, which provides supports to full-time community college students, and the CUNY Start program, which provides intensive preparation for students with remedial needs, are important steps in the right direction. But New York has a long way to go to achieve true college success for all.

Beyond the classroom, the city’s workforce development system still functions too much like a cumbersome placement agency. The de Blasio administration has laid out an impressive new vision with its Career Pathways initiative, aimed at developing career trajectories through skills building and education. But after more than three years, there is too little to show for it. The city needs to double down on proposed investments in bridge programs, career exploration, and on-the-job training, while strengthening and expanding partnerships with nonprofit providers, employers, and the public education system.

There’s no doubt that New York City is a formidable competitor in the quest for Amazon’s HQ2. No other city offers so expansive a world of culture and commerce in a single place, a paragon of urbanism and urbanity animated by an astonishingly diverse population. But if Amazon heads elsewhere, policymakers should not just blame cost and congestion. They should look to the serious shortcomings in the city’s human capital development system, which remains far from meeting its full potential.

***
Matt A.V. Chaban is the policy director and Fisher Fellow at the Center for an Urban Future. On Twitter @MC_NYC and @nycfuture.