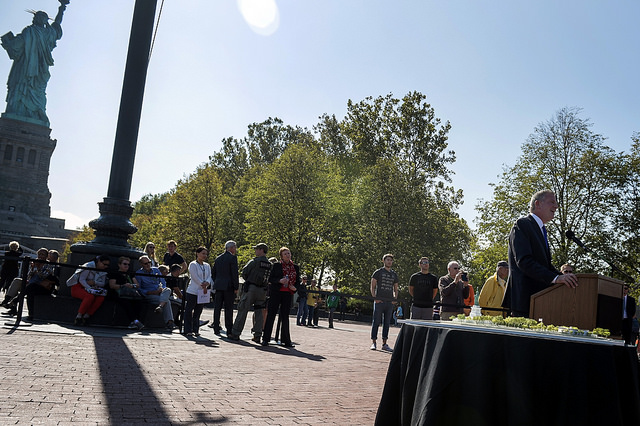 New York City is arguably the nation's most historically significant and diverse city. People across the nation look to New York for leadership, enlightenment, and inspiration, particularly in difficult times. Americans these days seem to be experiencing a sense of drift, puzzlement, uncertainty, divisiveness, and apprehension, in part due to the political situation in Washington, D.C.

There may be several ways New York programs and institutions can help.

A bully pulpit
Mayor Bill de Blasio has used his prominent position as mayor to speak out on some national issues such as immigration. He might use the high-visibility position even more expansively to provide a New York perspective on other political and cultural issues. He would be following a precedent set by former mayors.

For instance, former Mayor Michael Bloomberg, in a statement before the 9/11 Commission in 2003, eloquently described his city's cosmopolitan pre-eminence and why people look here for inspiration: "To people around the world, New York City embodies what makes this nation great. That's a function of our status as the world's financial capital, driven not only by Wall Street but our international prominence in such fields as broadcasting, the arts, entertainment and medicine....New York embraces the intellectual and religious freedom and cultural diversity that makes us truly the world's second home. We are a magnet for the talented and ambitious from every corner of the globe. In short, we embody the strengths of America's freedom."

Model blueprint for cultural enrichment and inclusiveness
On July 19 , the mayor and the city's Department of Cultural Affairs published CreateNYC: A Cultural Plan for all New Yorkers. "CreateNYC is the first-ever comprehensive cultural plan for the City of New York," says the introduction. "It is intended to serve as a roadmap to a more inclusive, equitable, and resilient cultural ecosystem, in which all residents have a stake."

It is a brilliant plan with many facets that can serve as a model for other cities. But New York City's history is apparently not addressed as a cultural asset. CreateNYC might expand its purview somewhat to include consideration of the city's historical heritage and how it relates to culture generally. Alternatively, there might be a separate report focused on history.

Guidelines for historical memorials in public spaces
On September 8, the mayor appointed an Advisory Commission on City Art, Monuments and Markers. It was in part a reaction to the tragic events in Charlottesville, Virginia, in August and other issues that led to heightened public awareness and sensitivity about public statutes and monuments. The commission is charged to "develop guidelines on how the city should address monuments seen as oppressive and inconsistent with the values of New York City." It will issue its recommendations by the end of the year.

In looking at specific monuments, the commission should consider the context and significance at the time they were erected. For instance, the Christopher Columbus statue in Columbus Circle was dedicated on Columbus Day, 1892, as part of a celebration of the 400th anniversary of his voyages that included parades, pageantry, and city-wide celebration. Speakers praised Columbus, but most of the emphasis was on New York's Italian-American heritage and the historical connections between Italy and the United States. Former Civil War general and historian James Grant Wilson, accepting the statute on behalf of the city and the state, told the assembled dedication crowd: "May it ever stand as a symbol of lasting friendship between Italy and the United States."

But the commission's work, including historical investigations, will not be simple. Columbus is a complex historical figure. A year before the dedication, in 1891, historian John Fiske's “The Discovery of America” was mostly positive about Columbus. But in the year of the dedication, 1892, historian Justin Winsor published “Christopher Columbus and How He Received and Imparted the Spirit of Discovery,” which disparaged the explorer.

The panel apparently is not charged with providing guidelines or criteria for what should be commemorated via monuments in public places. Its charge should be expanded to come up with such criteria which, in turn, could serve as a model for other cities.

Calling attention to real "New York values"
The Monuments and Markers Commission is charged with evaluating potentially offensive items against "the values of  New York City." Last year, during the Republican presidential primaries, Texas Senator Ted Cruz spoke scornfully of then-candidate Donald Trump's alleged "New York values." This led to an assertive response from Mayor de Blasio and many others about what "New York values" really are, e.g., creativity, diversity, openness, inclusion, tolerance, and resilience. These exemplary values seem like ones the country needs to embrace more fully these days. The commission, or the mayor,  might revive, expand, and deepen that discussion.

Education, historical understanding and civic consciousness
One of the best ways of building a capacity to understand and learn from history and develop interest in civic participation is through social studies in the schools. Here, New York City Department of Education guidelines and standards are particularly important, including the guidelines for grades K-8 and separate ones for grades 9-12. Other cities might review them for ideas on how to teach about historical awareness, cultural diversity, and citizens' civic responsibilities.

For instance, the Museum of the City of New York has an exhibit on "Activist New York.” According to the exhibit's description, "in a town renowned for its in-your-face persona, citizens have banded together on issues as diverse as civil rights, wages, sexual orientation, and religious freedom. Using artifacts, photographs, audio and visual presentations, as well as interactive components that seek to tell the story of activism in the five boroughs past and present, Activist New York presents the passions and conflicts that underlie the city's history of agitation."

New York is a model of diversity at a time when the concept is being questioned or even assailed in some places in this country. There are lots of historical programs that show New York's model leadership here. One is "Until Everyone Has It Made: Jackie Robinson's Legacy." On April 15, 1947 Jackie Robinson broke the professional baseball color line when the Brooklyn Dodgers started him at first base. "Featuring a wonderful array of archival materials, photography, programs, and memorabilia, the exhibition will tell a story that continues to resonate today," says the exhibit summary.

Getting young people aware of and interested in their city's history can help promote civic engagement as they grow into adult citizens. New-York Historical Society's Dimenna Children's History Museum is an outstanding resource for doing that.

***
Dr. Bruce W. Dearstyne lives in Guilderland, New York. He is the author of The Spirit of New York: Defining Events in the Empire State's  History, published in 2015 by SUNY Press.