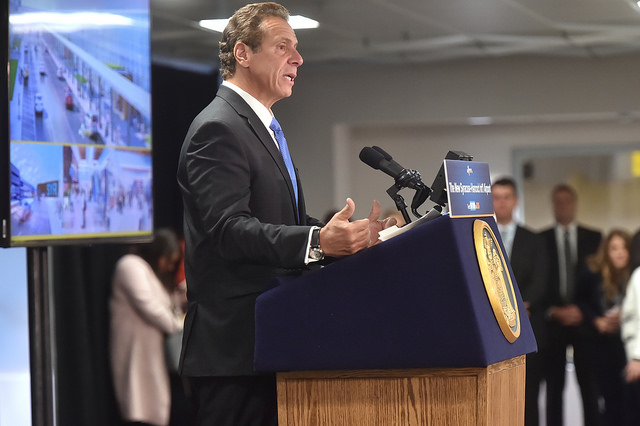 New York’s political world was rocked recently by revelations that Hollywood producer Harvey Weinstein, a major donor to Governor Andrew Cuomo and other top New York Democrats, had a long and sordid history of predatory sexual harassment -- and possibly sexual assault -- of women.

Initially Gov. Cuomo balked at giving back the $111,400 in contributions he had received from Weinstein. But a few days later, after Mayor Bill de Blasio called on all elected officials to return Weinstein’s money and the New York State Republican Party called out Cuomo, the governor saw the wiser route and decided to donate Weinstein’s tainted cash to a to-be-named women’s organization.

However, we are confused. While Gov. Cuomo is sending a clear message that sexism is unacceptable, he has refused to send the same message about racism. Recently Daniel Loeb, a hedge fund manager and investor in privately-run charter schools who has given Cuomo $170,000, continued a pattern of behavior with an outrageously racist Facebook post. Loeb asserted that State Senate Democratic Leader Andrea Stewart-Cousins, the highest ranking African-American female elected official in New York State history, had done “more damage to people of color than anyone who has ever donned a hood” -- an unmistakable reference comparing Stewart-Cousins to the Ku Klux Klan.

Loeb’s racism doesn’t stop there. In 2006 Loeb also called Prem Watsa, a Canadian corporate leader who is of Indian descent, a “shvartze,” a Yiddish term for African-American that equates to the n-word. Loeb has also sought to profit off of Puerto Rico’s debt and drive up prescription drug prices. And as board chair of Success Academy, he has supported excessively punitive and rigid disciplinary practices and suspensions meant to force struggling African-American and Latino students out of Success schools. Such zero tolerance behavioral policies have been shown to put students on track for the school-to-prison pipeline.

Despite Loeb’s documented history of racism and support of racist policies, Gov. Cuomo refuses to return campaign contributions from the wealthy financier. In contrast, New York City Comptroller Scott Stringer immediately shed a $4,500 contribution he had received from Loeb once the recent Facebook post became public.

Regarding the Weinstein incident, Gov. Cuomo stated, "I have three daughters. I want to make sure that at the end of the day, this world is a safer, better world for my three daughters." We wholeheartedly agree with that, but African-Americans and other people of color have daughters and sons as well, and they merit protection from racists like Daniel Loeb, who clearly showed his belief that he is superior to Senator Stewart-Cousins and that he knows what is better for children of color than she does. In New York State we will not accept a double standard under which sexist political donors are treated as toxic in political circles, but money from racist political donors is condoned.

Sadly, we are living in a time when the president has made racism a mantra and has emboldened violent white supremacists to openly assault opponents of racism. We applaud Gov. Cuomo for making clear that Harvey Weinstein’s sexist money is unwelcome in New York politics. Gov. Cuomo’s hesitation to return Loeb’s tainted money is deeply concerning and offensive. We need him to forcefully and definitively repudiate Daniel Loeb’s racism. No more excuses, it is time for the governor to give back Loeb’s contributions, like he’s doing with Weinstein’s.

Gov. Cuomo recently described racism as “the greatest threat this country faces” - so there should be no problem treating racism with the same firm hand as sexism. If the governor decides to keep Loeb’s money, he is sanctioning racism, just as returning Weinstein’s money was a clear repudiation of sexism.

***
by Zakiyah Ansari and Carmen Perez. Ansari is advocacy director for the Alliance for Quality Education and Perez is executive director of Gathering for Justice and co-chair of the Women’s March.